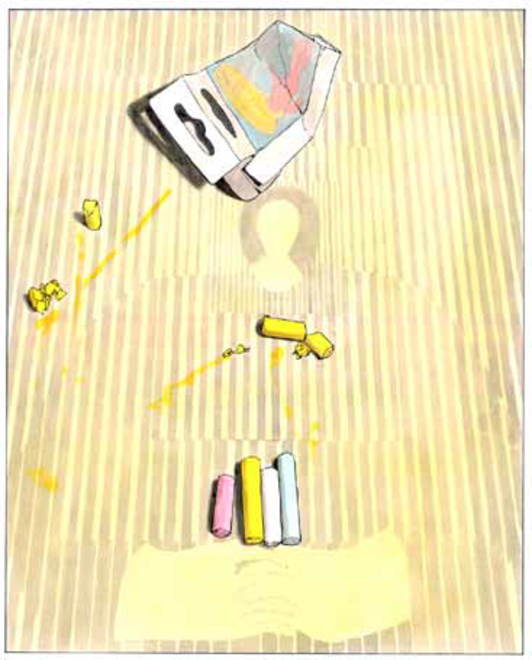 Mick Peter likes to explore the painterly quality of sculpture, and the sculptural quality of painting. He illustrates his own illustrations, turning them from CD covers (that he makes for his friends, the band Socrates) to strange reproductions of three-dimensional paper figures. He creates images, transforms them into patterns, then uses them to build walls. Most of the pieces that constitute Tao Foam reference something the artist originally created in another form, material, or medium. The resulting exhibition is a playful space of imagination, an environment that – if it won't make you think too hard – is likely to satisfy many of your senses.

As I walked in the gallery I was first struck by the smell, which I assume was a mix of resin, latex, and whatever other material Peter employed in his Albert & Jenny installation. The opening piece of the show represents a blackboard, stabbed throughout with oversized pieces of chalk, which also lie broken on the ground. If the effect of this artwork is quite punchy, the illustrations in the following room definitely have a lower profile, even though they're visually more interesting. The series plays with three-dimensionality, reproducing old artworks by the artist as a sort of background, on which new origami-like figures are superimposed. 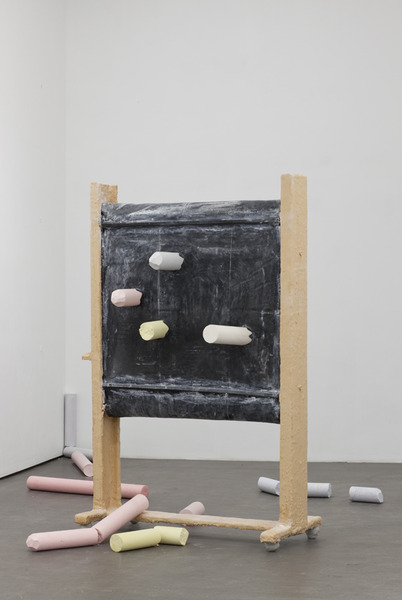 After passing by a very forgettable black sculpture (which hardly has the magnetic presence or color of the first one) I entered the third room, entirely built for the occasion. The walls are composed by a series of bas-reliefs, all reproducing the same image (the illustration of a figure designed by the artist) and a series of wavy plastic rugs populate the floor, resembling a pack of animals racing towards the wall. Such an image feels pretty random, and the comic-like surrealism of the installation is also enhanced by the smell of the materials, stronger than ever.

There is an engaging beauty in Peter's works, even though it's hard to grasp any symbolical depth in his imagery. The exhibition is a playful, material-oriented experience; it's beautiful, but without a cohesive narrative the individual pieces feel quite disconnected.

[Image at top: Mick Peter; Courtesy of the Artist and GRIMM (KEIZERSGRACHT)]

Look out for the unicorn Elisheva Biernoff
3/9/13

Materiality and Surface: abstracting form Group Exhibition
1/24/13
COMMENTS (0)
ArtSlant has shutdown. The website is currently running in a view-only mode to allow archiving of the content.