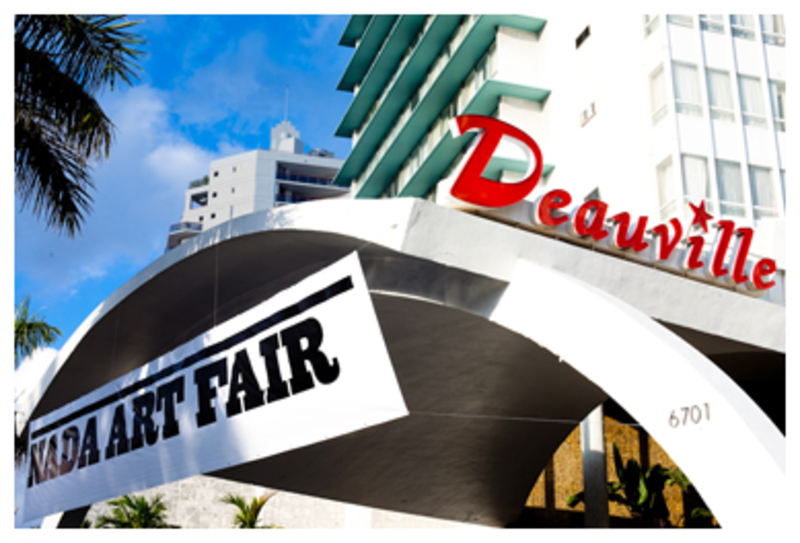 After the decorative overdose that is the typical Miami art fair, the relative conceptual rigor of NADA was a breath of fresh air.  There is, of course, such a thing as too much emphasis on headiness, especially when it’s to the detriment of the esthetic object or amounts to an inside joke that most of the viewing public isn’t in on.  This was not the case at NADA this year.  There was a great deal of strong work that, unlike almost anything I saw at Art Miami or Scope, was rooted in and capable of conveying ideas sufficient to justify their physical existence. A broad cross section of mostly younger national and international galleries, with New York’s Lower East Side particularly well represented. So away we go... 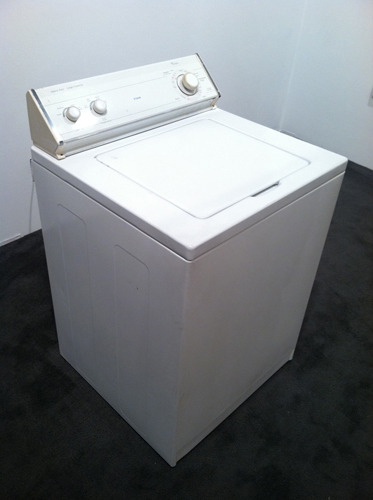 Joanna Malinowska’s  In Search of Primordial Matter, 2011, involves a laundry machine altered to run on perpetual spin mode. If you will believe its author's claims, the machine contains tiny pieces of ceramics from Peru's Cahuachi pyramids (400BC – 300AC), reindeer moss, a handful of nothing collected in darkness (after the 1973 performance 10 Minutes by Zbigniew Werpachowski), water from Lake Titicaca, Cartesian doubt, a dead hare that knows a lot about art, chopped hemlock, Gottfried Liebnitz’s Discours de metaphysique and Bronsislaw Malinowski’s Sex and Repression in Savage Society. Although the primordial product of this domestic particle accelerator is never seen (the artist insists that the lid remain closed), gallery staff and visitors alike enjoyed the hypnotic vibratory hum and occupying a booth that felt a little bit like a price is right showcase. (Courtesy Canada Gallery) 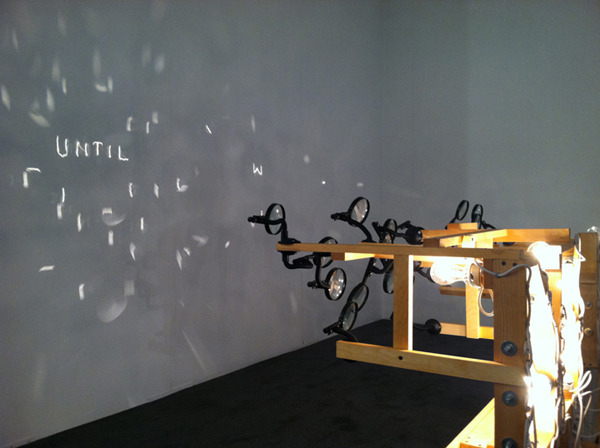 Ian Burns’ Progression, 2011 is an exercise in anticipation and gratification.  Light bulbs are illuminated in a random sequence that spells out the words “until now …” at which point they turn off simultaneously. 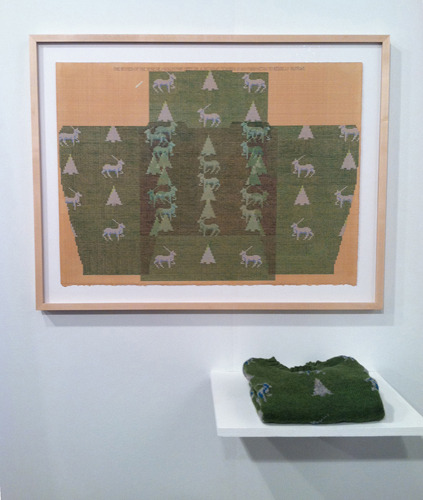 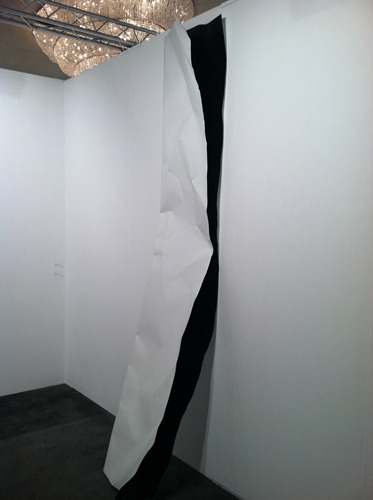 Michelle Lopez’s Blue Angel, 2011 is a feminist response to minimalism in which she uses her body to interact with and transform the medium. (Courtesy Simon Preston Gallery) 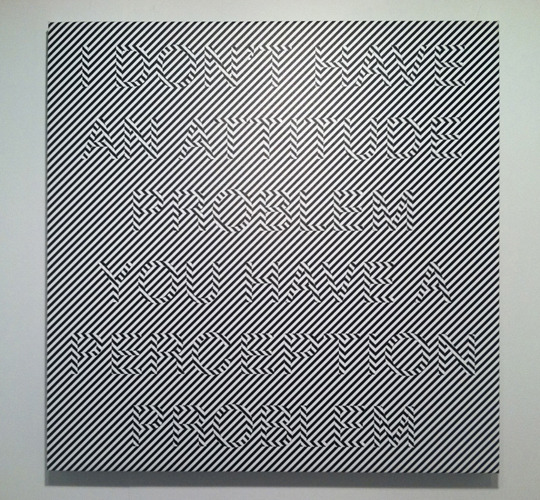 Barb Choit’s (Op Art #1, 2011) slogan-based merchandise as ready-mades ridicule by emulating.  “It’s a no brainer,” someone told me – that’s for sure. (Courtesy Dumbo Arts Center) 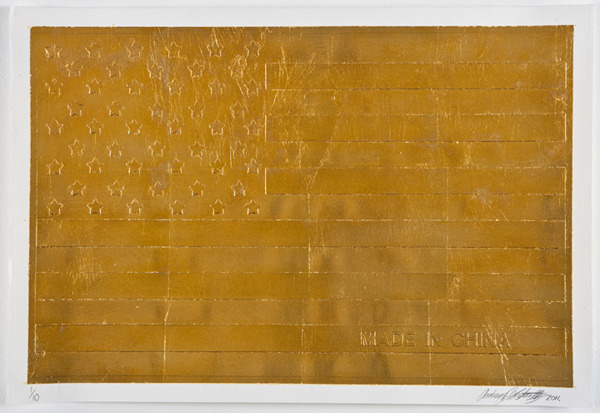 Andrew Schoultz’s gold flags, Made in China, 2011, were an obvious but timely commentary on the socio-economic state of this country.  Proceeds from the works, which sold out quickly, went to support Locust Projects as they prepare to relocate to a new space in Miami’s design district. (Courtesy of the artist and Locust Projects, Miami) 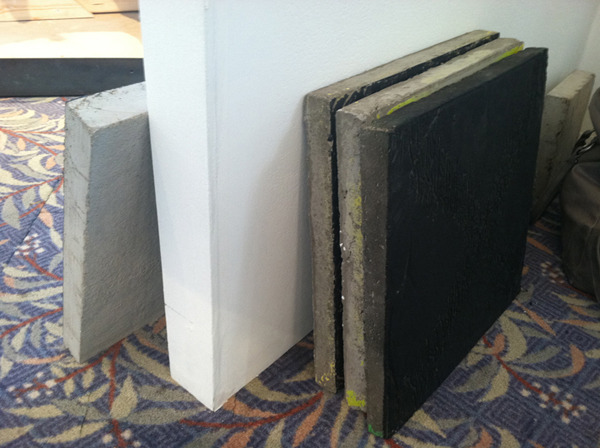 There was a conspicuous number of cast cement panels in mostly similar formats at a number of different galleries. This is not to say that they were not generally appreciated, particularly these, by Davina Semo at Galerie Gabriel Rolt. 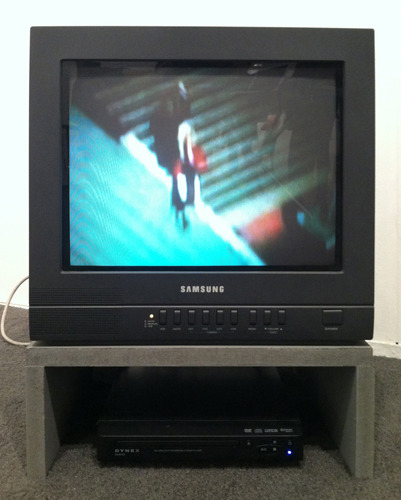 Johan Grimonprez’s …because Superglue is forever!, 2011, alternates back and forth between a casting session in which children act out love scenes and amateur footage of events ranging from catastrophic to sublime. The found footage, which Grimonprez apparently intends to be tongue in cheek, was actually quite beautiful until interrupted by loud text proclaiming the piece’s decidedly obnoxious title. (Courtesy ltd los angeles) 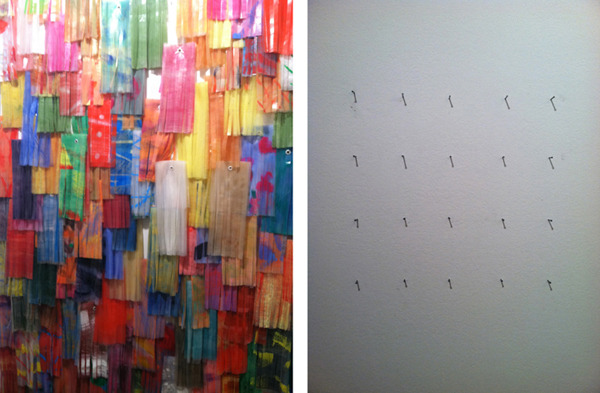 Mia Taylor’s C.H.E.E.R Miami, 2011, is composed of 185 individual paintings that can be purchased individually or in groups and rearranged as desired. (Courtesy Toomer Labzda) 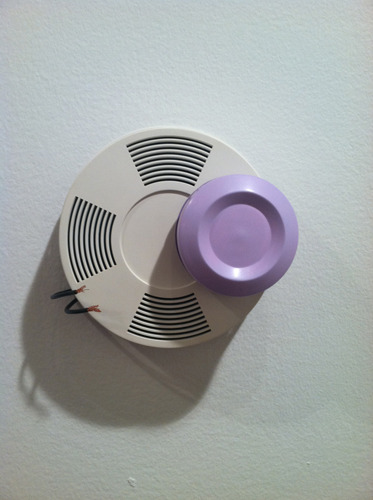 Paul Gabrielli’s ironic juxtapositions of familiar elements, Untitled, 2011, are fun and perhaps useful as well.  No one wants a smoky smelling house even if it’s burning down. (Courtesy Invisible-Exports) 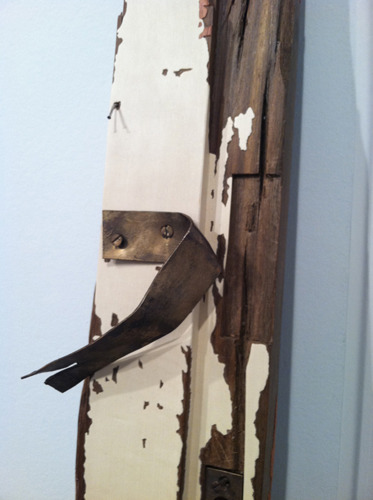 Susan Collis’ work looks like found detritus but is in fact  painstakingly crafted from precious materials.  The hardware is bronze, platinum and white gold.  (Courtesy Seventeen) 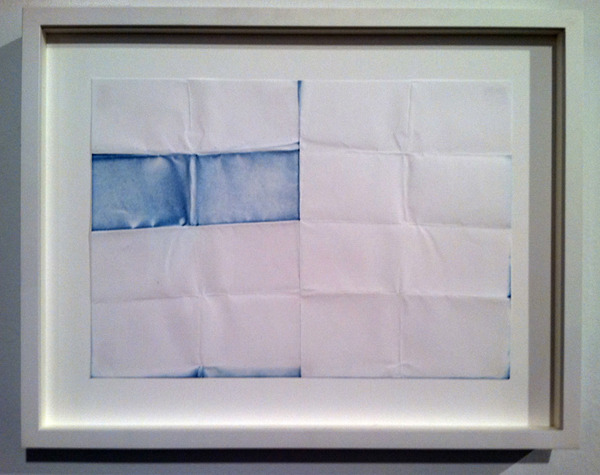 In Kate Owens folded this piece of paper and put it in the pocket of a new pair of jeans. (Courtesy Seventeen) 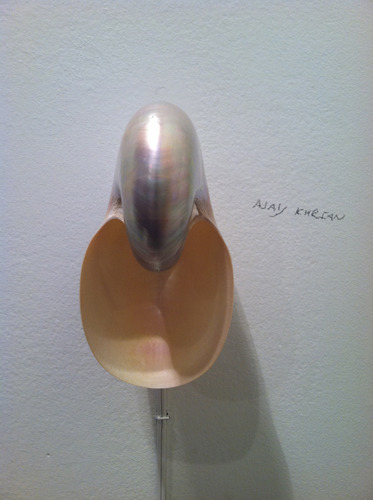 One could hear more than the ocean in Ajay Kurian’s amplified shell.  (Courtesy Audio Visual Arts) 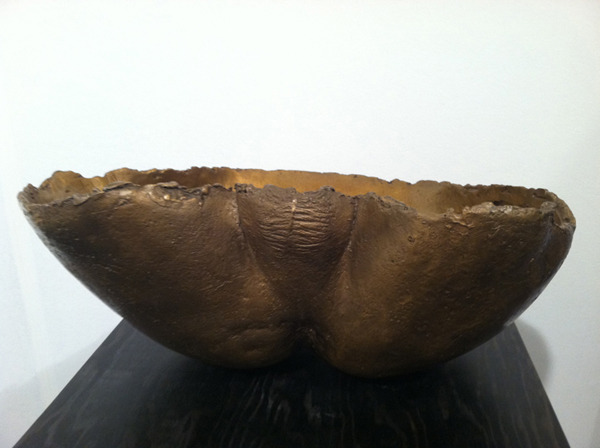 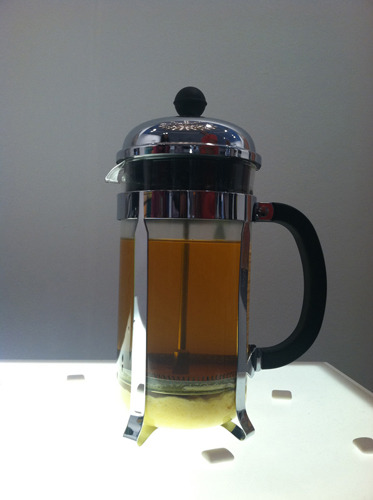 Josh Kline’s cocktails distill the mediated and medicated components and compounds that have become central to frenetic lives.  If memory serves, this one is Red Bull and some kind of speed. (Courtesy 47 Canal Street) 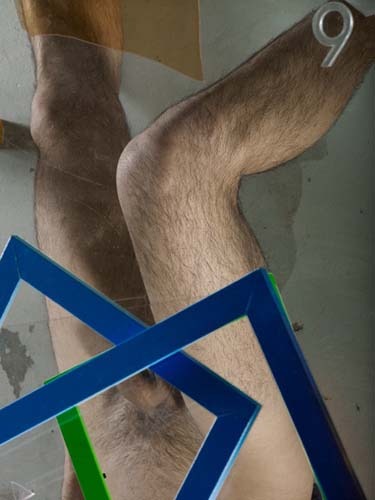 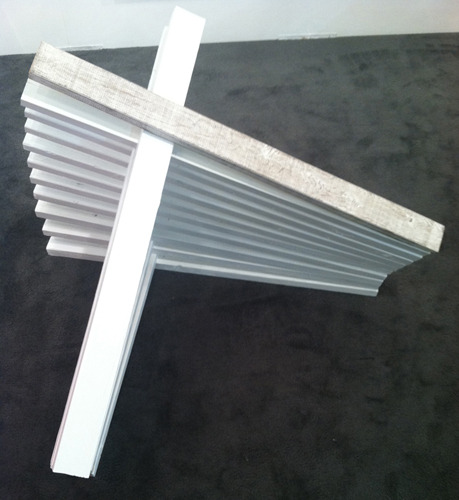 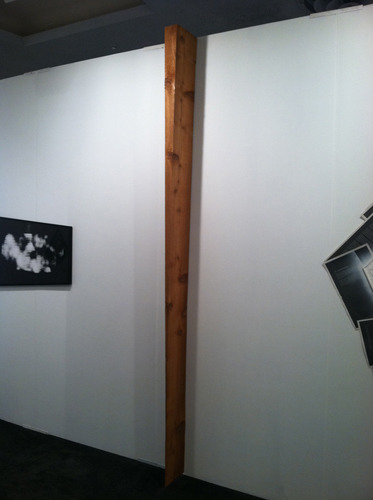 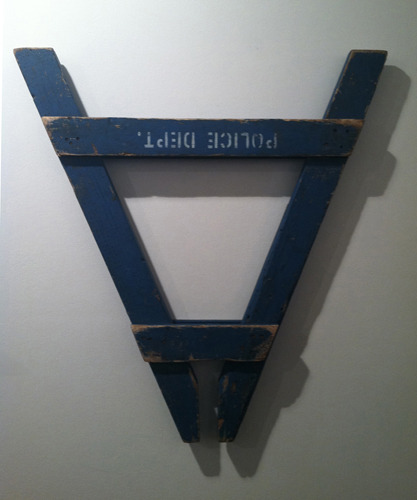 Charles Harlan’s inverted police barricade oscillates back and forth between the mundane object and a vague, perhaps spiritual symbolism. (Courtesy JTT) 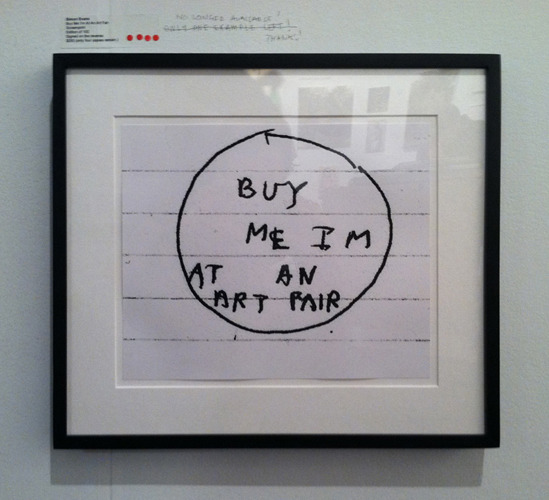 Collectors obediently threw down for Simon Evans at White Columns.