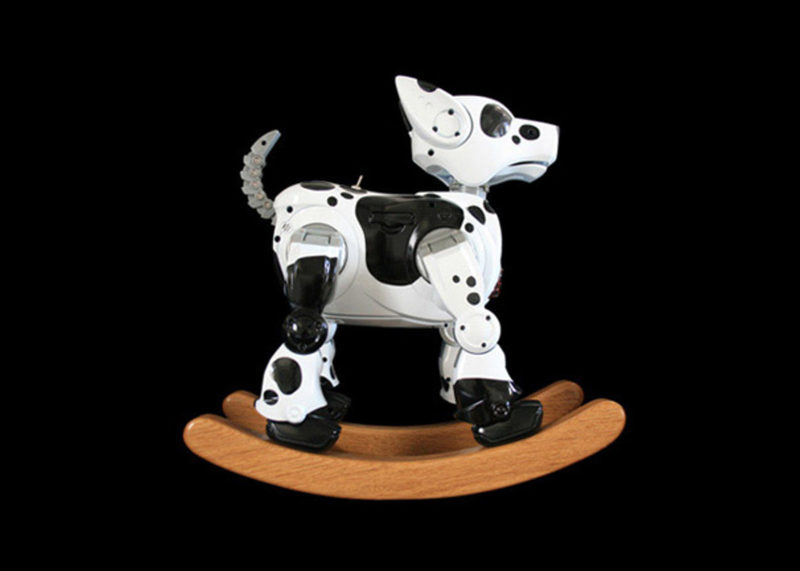 Chicago, Nov. 2011 -  I sat down this past month for a drink with France Cadet, French artist who has been blurring the lines of the natural and the robotic for the past decade or so. Ms. Cadet was just this year brought on by the Art and Technology faculty at the School of the Art Institute of Chicago. Previously, she had been volume and robotics professor at Ecole Supérieure d’Art d’Aix-en-Provence and took first prize at VIDA 6.0 in Madrid. She is perhaps best known for her work characterized by refashioned robotic animals that question the ethical place of animals in human culture as well as perforating the line between the biological and technological. By manipulating scientific protocols and representations, Cadet, through implication, forces a reexamination of the dominant mode of modern understanding. In the following, we discuss her use of robotic satire and the role of the audience in her art, animal and robot rights, and what we could learn from animals and learning-robots. 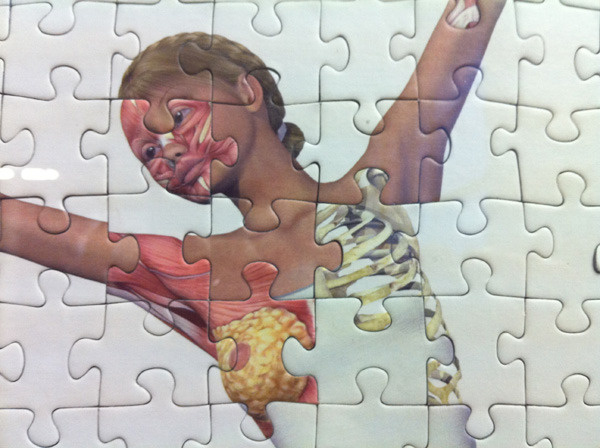 Joel Kuennen: I would like to begin by addressing your more recent work but first a more general question. You distinguish yourself artistically amongst Bio-artists by using robots “metaphorically.” What metaphor do robots represent for you?

France Cadet: Some artists and bio-artists, for example, Eduardo Kac, question if we can use biology as artwork and question if new species can be created as an artifact. For me, the robot is a medium to talk about animal and human relationships: the animal as used in the breeding industry, in Bioart, biological experiments. In this way, I don’t feel too close to other artists who use biology because it is more of an ironic presentation.

JK: You came to robotics from this interest in ethical considerations of animals?

FC: My first artwork started with science control problems because I have a background in science.

JK: The taxonomies and morphologies in Anatomical Drawings…

FC: Yes, I wanted to have more interactive work after that and to involve the audience because for me the audience is at least as important as the artwork. So I see it more like an installation with drawing, sculpture, and robots but not only robots. I don’t feel so close to the use of screens and cameras and other new media tools. I feel closer to traditional beaux-arts practices. For me, robots were not the point of my work, but just a medium to embody my questions. So first, I made a DVD which was talking about biological experiments on animals and then I wanted to make the same thing but with robots because you can produce behavior, so it was better to involve the audience and the anthropomorphic projections you referred to but still with the humor and ironic aspects.

JK: For example, in Dog [LAB] 2, the robots with Mad Cow Disease, there is an empathy produced when you see the circuit freak out and fall over. 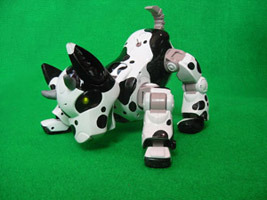 FC: That’s why the audience's behavior was a problem for me and led me to make other modifications in my work. Because in the beginning they would say, “Oh it’s funny.” I wanted something more frightening. Even though I’m not looking to produce frightening installations. So then when I used these robots, I started to think about the fact that they are robots and they weren’t just a medium and I started to question the role of robots in everyday life, that they are becoming more and more lifelike. So I started to question the relationship between animals and machines and humans and machines.

JK: Dog[LAB]01 and Dog[LAB]02 were projects that focused on the ethical relationships between humans and animals as consumables and companion animals. Hunting Trophies, on the other hand seems to refocus your interests on the metaphorical use of robots to address cultural concerns on a larger scale. For example, the majority of the robotic representations in Hunting Trophies are of exotic animals (lions, leopards, lynx, etc.) that fulfill an interesting if not poorly misunderstood role in human/animal relations. Could you speak to this difference in usage?

FC: Yes, we can ask ourselves if there are exotic species facing extinction or are protected, if it’s a projection of our future, if robots were to replace animals, etc. 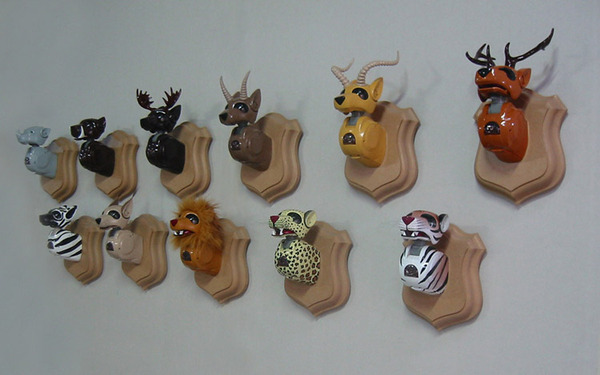 JK: Would you say humans deal with robots the same way we deal with companion species or is there a different process of identification and disidentification that’s going on between humans and robots?

FC: Yes, that is a problem. It is funny to see that the more lifelike robots become, the more they are prone to human-like diseases. For example, computers have viruses and robots could start being “sick” or have human pathologies or human problems. I think people treat the machine as they treat animals. The first machines were made to replace human labor and then to produce entertainment for us. And now it is taking over for more species because the machine begins to involve itself more heavily in labor or social activity. You can see the machine as something that is useful, for its function. That was the first development. The second development is humanoid. There are two ways of thinking. Robots have to exist in our world so they have to be shaped like humans or animals to be able to take advantage of our built world. The other way is to be just a functional machine. Those two ways are still being developed. To think about natural and artificial: these two distinctions are becoming more permeable. For example you can find nanotechnology in your body, build motors with proteins, etc.

FC: They want to interact with the robot, it is something you cannot avoid. Even an installation where it is just a preprogrammed loop, they are convinced that the robot is reacting to them. Dog [LAB] and Spina Family are preprogrammed loops but they react and respond anyway. Of course people want to react, they look at the behavior and smile and then look at the exhibition card and start to think about the work. 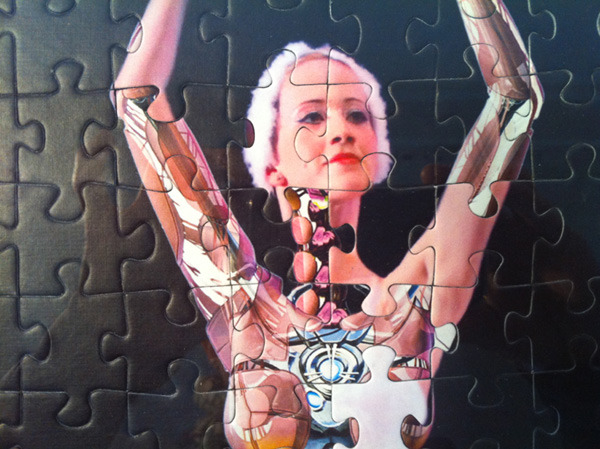 JK: Your most recent work, Ballerines is a departure from robotics and sculpture and instead seems to communicate a desire to unify the differentiations of the human body: representation (the ballerina), biology (anatomy), technology (cyborg). It is, as well, a different form of presentation, less performative and more traditional in that they are framed works on a wall. What brought you to this point?

FC: I am always working on drawings and robotics but it’s more about performance for me. Nanotechnology I am not too concerned about incorporating in my work. With Ballerines, I wanted to take a very traditional presentation of the woman as a ballerina. I wanted something more traditional to question the incorporation of the artificial in the body, where the artificial stops and the natural starts or vice versa so I exchanged some parts. Like if a human ballerina had an artificial prosthesis or a cyborg has biological aspects.

JK: I saw three different aspects of the contemporary individual represented in this work: the human appearance, the biological representation and the cyber.

FC: There are two instantiations of this piece. There is one where it is just the puzzle put together already and then you can also get the pieces where you decide which parts will be cyborg, real, or biological.

JK: You cite Dominique Lestel’s concept and book of the same title, The Singular Animal, as being influential upon your work with robotics and animal ethics. As someone who has never had the opportunity to read Lestel (he remains to be published in English), I am curious as to how his idea concerning interdependent human and animal cultures influences your thinking concerning robotics and the relations between the human/non-human.

FC: We cannot study animals without the human. It is difficult to think about evolution because we are in it together. For example you can ask if we adapt to animals or animals adapt to us.

JK: And the same is the case for humans and technology. For example as technology becomes more independent then it starts to influence our evolution as well.

FC: Yes, of course. Even in technology it is very difficult to make an abstraction from the model of nature. Even we are creating adaptive models of robots which are suppose to learn and evolve on their own, it is just a reproduction of nature’s model. We cannot escape this model.

JK: Ray Kurzweil provocatively advocates that a cultural singularity will advance beyond anything we know now, creating a profound schism. Is that even possible?

FC: I think we cannot escape that model. You can speak about aliens or whatever but we cannot escape this. There are some researchers working on a learning robot who say that even the body is a variable that needs to be taken into consideration because it allows the robot to move and learn in a certain way so it is still a projection of humans. 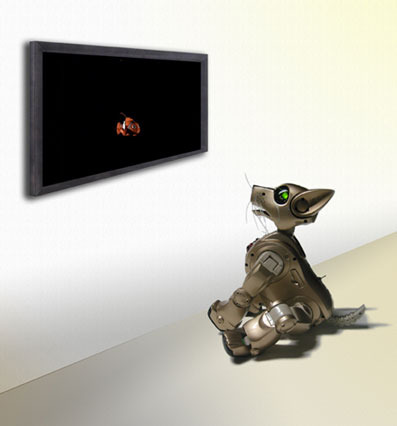 JK: Domestication has allowed humanity the time to develop more complex forms of popular culture. As domesticated robots free up even more time, what do you see happening to culture?

FC: I think the more complex they become, the more difficult to control they become. But as soon as machines like robots have been created, the creator is afraid of losing control of their creation. For exmple, the Three Laws of Robotics is meant to protect the creator not the robot. With technology, the more complex it becomes, the more difficult to domesticate it becomes. We are not going that direction, I think. With animals, it’s the same thing. Of course they are domesticated now, but you see these problems with Mad Cow Disease and industrial breeding and all these species that are disappearing and the subsequent devolution so I believe we don’t really succeed in domesticating animals or technology.

JK: So then are we at a fatalist point? A point of no return?

FC: Maybe not, but the more advanced it becomes, the less control we have.

JK: For example, Robo World Cup has two goals: to produce adaptive robots and a hive mentality that could lead to a form of cultural evolution.

FC: Yes. Perhaps what we could learn from animals and robots are "swarm intentions." [Laughs]

ArtSlant would like to thank France Cadet for her assistance in making this interview possible.

Posted by Joel Kuennen on 11/27/11
Tags: sculpture mixed-media installation robots
ArtSlant has shutdown. The website is currently running in a view-only mode to allow archiving of the content.