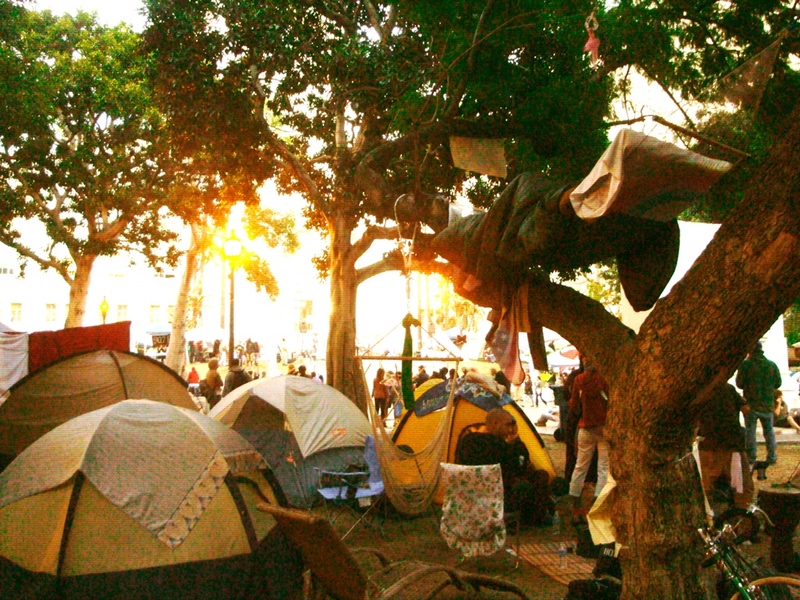 Sitings 7: To the Barricades

Last week I got to see a longstanding idol of mine, the author Joan Didion, when she appeared in conversation with writer and editor David L. Ulin, as part of the ALOUD series for the Los Angeles Public Library. Though I realized, waiting in line, that I probably wouldn’t be able to help myself from being disappointed, no matter how good the talk was (the whole experience promising to be a little like the disconnect of seeing a favorite band live in concert and despite the physical proximity, actually feeling farther away than you did listening to their record alone in your room), it was still exciting and inspirational to see Didion in person, in all her sparrow-like grace and utter, disaffected eloquence and wisdom. Hearing her read out loud, the first pages of her famous essay, “The White Album,” I was caught again in its stark, lyrical swarm; the essay remains one of the most successful elegies for the end of a youthful assurance in truth I’ve ever read.

And while so much of what Didion has written has always struck me for its clarity of insight, its emphasis on counter-narratives and askew forays into the subjects and historical ideologies of whatever decade she’s found herself writing in (of which she’s now approaching the sixth), one note of last Wednesday’s talk that did not ring as true was when Ulin prompted Didion to read the last paragraph of her essay, “On the Morning After the Sixties,“ to the audience: “If I could believe that going to a barricade would affect man’s fate in the slightest I would go to that barricade, and quite often I wish that I could, but it would be less than honest to say that I expect to happen upon such a happy ending."

Since it was placed in context of comparing the sixties to the present day, the quote appeared a not-so-subtle allusion to the Occupy movement stationed at City Hall just a couple blocks away from where the talk was being given at the Vibiana, and further away all over the country. Ulin and Didion both seemed to brush off Occupy Wall Street as little less than a group of vague discontents searching for that “happy ending.” What a different tone than from another talk I also happened to attend last week at the Hammer Museum entitled, “High Voltage: The Watts Legacy.” This discussion, which featured the artists John Outterbridge and Andrew Zermeño, as well as the art collector, lawyer and former mayoral candidate, Stan Sanders, as panelists, focused on the Watts Riots as critical moment, an uprising that helped to change the perception of African American artists in Los Angeles forever after. Most of all, the discussion gave a poignant, personalized portrait of how activism can begin. “I got on this Greyhound bus in Richmond, Virginia,” Outterbridge said, referring to the time in 1955 just after he got out of the service, “and I was told that I should go to the back of the bus and sit down. I had a hand full of calluses, I could build bombs, I was angry, I was hurt, but I was glad to be back on this side…I went to the back of the crowded bus, with a big duffle bag and I sat down finally and I cried (first time I cried in a long time because I was made of bricks and I just couldn’t cry) and I said, that movement that I hear about is just beginning to start—the civil rights movement—and I became an activist. I never blew up a bus, but I knew how!”

Who could tell on August 11, 1965, what Watts might have meant today or that the civil rights movement would have been successful? Perhaps it’s not about happy endings, or protests as dissatisfied missives to the future, but instead, reaching for a bit of equality in the present, no matter how fallible it leave us.

—Kate Wolf, a curator and writer living in Los Angeles

The Librarian: An Imagined Monologue for an Installation Zuleikha Chaudhari, Boris Nikitin
2/8/14
COMMENTS (0)
ArtSlant has shutdown. The website is currently running in a view-only mode to allow archiving of the content.