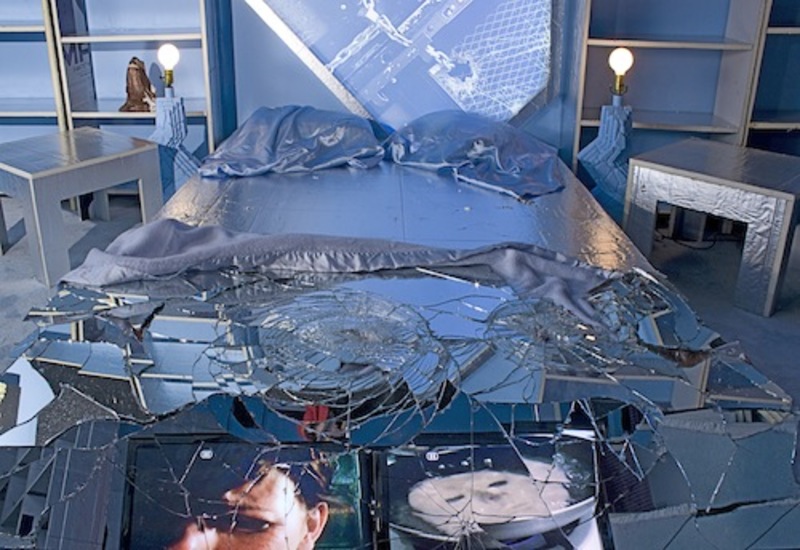 How Deep is the Ocean?

The interconnection between trauma and its aftermath—a resulting, unwieldy jumble of repeating memories and substitutions that morph the present and rearrange the past—is just one way inside understanding the artist Samara Golden’s arresting, dramatic and complex new installation, Rape of the Mirror, currently on view at Night Gallery.

In this work, Golden has transformed the space almost unrecognizably: the gallery’s walls, normally black, are painted a light pastel blue and matching patches of carpet line the floor—the interior’s overall aesthetic falling somewhere between a cheap Miami motel room and a 1980s music-video set. A white leather couch is placed on the periphery of two distinct installation rooms. One, a kind of living room, is arranged with shelves containing stacks of constructed, low-fi stereos, covered in silvery Rmax, (a brand-name insulation material used throughout the piece); these bookend a large screen projecting gentle ocean waves lapping to shore. In the path of the screen, a single sculpture of a crooked, silvery blue eye rests on a table, and in front of it are two boxy, constructed chairs, also covered in Rmax, one with a soft sculpture made of red cloth resting atop the seat. On the ground to the right, a wide rectangular mirror reads as a tub with a bath towel hanging off its side and a glass of half-drunk white wine beside it. The entire scene is projected on two television monitors stacked on top of one another on the floor, facing out, and modulated by two analog video mixers, just below two video cameras.

When a viewer ventures inside the installation, either as perpetrator or participant, the camera captures them in three monitors, the two in this room and one in the other. The adjoining bedroom provides an analogous nightmare scenario to the living room’s calm fantasy, the rooms like metaphors for the colliding mental spaces of “after” and “before.” One necessitates the other.

Here, in the “after,” the mirror motif is presented myriad ways. Once, as a type of dream screen above the room’s silver bed where a year's worth of images from the artist’s iPhone—pictures of cactus, road trips, a blue face painted on cloth with the mouth cut out—loop at a synaptic pace. Another time, in a monitor to the side of the bed, where the mirror tub captured from the other room repeats these images using color keying. In a third instance, further down on the bed, where a mirror appears with some contrivance to have been hurled against it and shattered. The large pools of broken glass reflect two other video monitors at the bed’s foot, screening footage that corresponds to items included and images projected in the rest of the installation: a fountain shot from upside down, a simple clay face broiling in a pan of water, the artist herself in a tight close-up, sobbing painfully.

A soundtrack of distant echoing plays in back of it all, (a rendition of Brian Wilson’s haunting, “Till I Die”) asking over and over, “how deep is the valley…how deep is the ocean?” In this piece, Golden seems to make every attempt to explore building depth by reflection and doubling, not only through mirror illusion but also with physical construction, layering and simple technology used to complicated ends. In the process, she sets up a mechanism, an opportunity to view, in three-dimensional space, the workings of mind. It’s one that is coping with something emotionally horrific and very real.

—Kate Wolf, a curator and writer living in Los Angeles