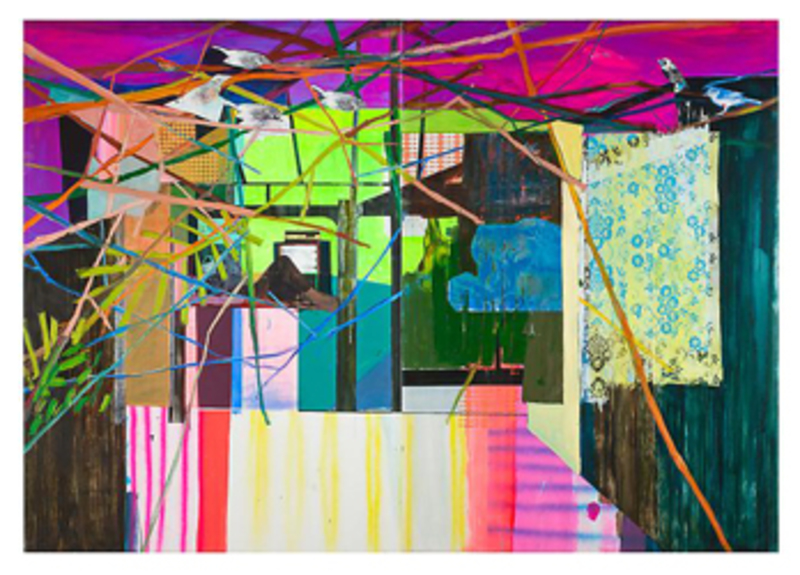 Acrylic, oil, silkscreen, transfer, collage, canvas, plexiglass, cutouts, airbrush, shadowbox: there’s a lot going on in the works that line the walls of Chelsea’s Freight + Volume. In Beyond The Rocks, Kristen Schiele’s first solo show in the space, the Bushwick- and Berlin-based sculptural painter presents a series of very mixed media two-dimensional works. In Mahjong, Schiele constructs a three-tiered shadow box. Layers of plexi covered in neon-colored geometric markers are stacked within the box, creating a vortex-like augmented sense of depth. Beneath the stacked frame sits a small figural collage. In this moment, the figural is paired with the whimsically geometric. It is Schiele’s combination of these two elements within her ecstatic compositions that create other worlds.

When we step into Schiele’s worlds, it is hard to tell if we’re walking into the static of a television screen, a warbled version of magazine adverts, or onto a pulsing dance floor. The use of collage in the smaller works, and a collage-like fusion effect in the large scale paintings, creates landscapes, some more literal than others, with the volume turned all the way up. Geometry is one of Schiele’s foundational languages, as lines and forms fill the canvas surfaces. The use of found imagery injects a kind of fantastic and bizarre nostalgia. The bits and pieces culled from vintage sources -- near nude women, cats, abstracted patterning -- function as exclamation points at the end of an already exclamatory statement. The sense that Schiele’s works are shouting out to us, or perhaps singing, highlights their hallucinatory quality. Her palette is ripped right off a raver kid’s glow-stick laden neck. Put geometric compositional quality through this light-bright electric coloring and out comes a work that feels like some kind of trip.

In Tidings, a female form is laid in a three-tiered cut out, a square inlaid with a diamond inlaid with a diamond, directly in the center of the piece. Painted behind this sculptural element is a slightly bizarre horizon, a mountain-scape rendered in abstracted brightly colored forms. The sky is an incandescent chartreuse, the mountains fade into a patchy white, cream, tan blend. Schiele builds a space for us to explore and makes the offer hard to resist. There’s a refreshing lightness to her work that yields a playful transcendence, the hint of the Beyond alluded to in the show’s title. Schiele riles us up in a collision of color, form, and humorously quotational imagery. Where exactly we land within the four walls of the work is hard to tell. It is clear, however, that Schiele takes us somewhere else altogether. 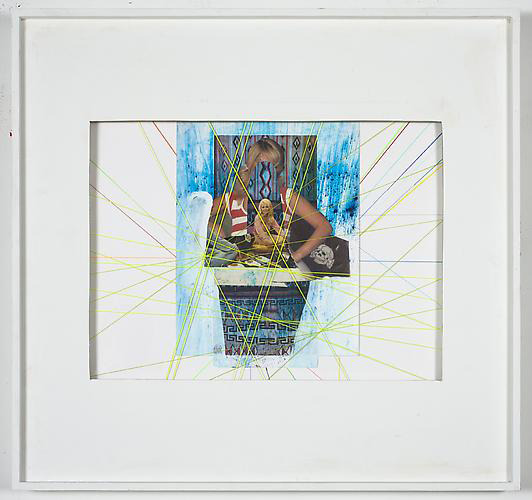