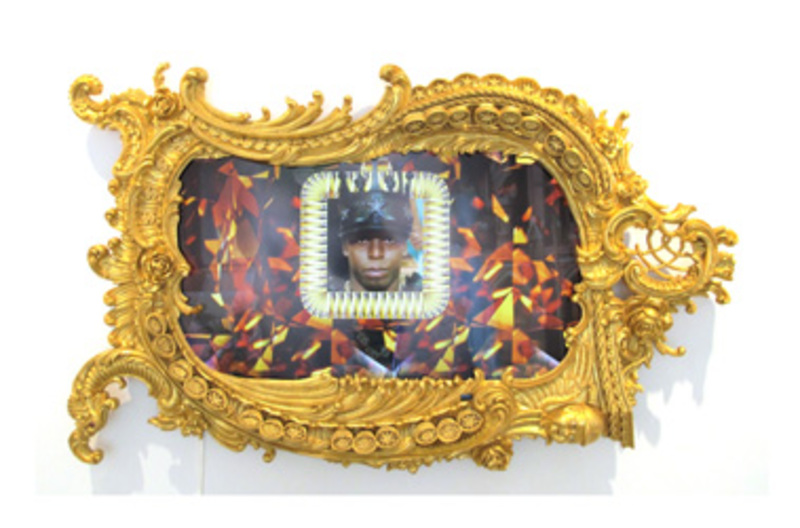 In any form of combat, it is important to know who your enemies are. Armies often define themselves based on their customs, manners, and rituals so that no one would ever be in doubt about which army it was they had just encountered. The fine art of heraldry – a kind of ancient and old school swagger – grew out of this necessity for bravado, presence, and visual identification. Participants in combat shielded their faces behind iron or steel, and heralds began creating elaborate coats of arms and badges to serve as visual markers instead. Modern day herald Rashaad Newsome has taken the fine art of heraldry to a whole other level. “Herald and Swag,” Newsome’s first solo exhibition at Marlborough Chelsea (and the first exhibition marking the gallery’s shift in focus toward younger contemporary artists) takes an ambitious stab at updating heraldry’s images, rituals, and forms by juxtaposing them with the images, rituals, and forms of hip-hop. 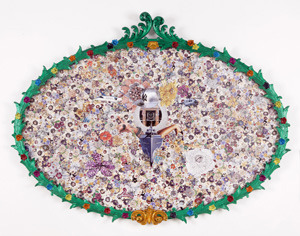 Newsome’s collages are methodically and carefully made, each detail contributing to a new visual narrative of power. Each composition contains three components: the background image, the emblem (crest or coat of arms), and the antique frame. The way he arranges jewel encrusted teeth, marijuana plants, or expensive jewels, for example, and then overlays images of sports cars, gold chains, “spinna” car rims, and beautiful women creates an absorbing tension that blurs the line between the ornateness of Baroque and the excess of Rococo. This conflict is heightened when all of the visual complexity within the collaged image is contained by an antique frame that has been augmented with materials like faux leather, auto body paint, dollar signs, bees, and other “bling.” Newsome’s compositions ooze with a want, desire, and longing that demand they be possessed.

In Blazon (all works 2011), Newsome gathered images from urban couture to convey a sense of power, pageantry and status in its large-scale (75.5 x 48 x 9”) rendering. The background, a mix of fiery flames and golden ropy chains, cannot contain images of sneakers that seem to leap out of the work. A tattooed fist also seems to punch out of the image near the top of the emblem proclaiming “ROZAY” with a sparkling diamond four-fingered ring. Swatches of leather featuring the Louis Vuitton logo accent the frame, providing the right amount of decadence if the gilding and fur that accompany it is not enough. Succubus is a coffee and cream-colored collage of bent limbs, flexed digits, and phat asses. The background is an intricate repetition of female forearms or calves bent at the elbow or knee with images of flexed fingers or sandal-clad toes interspersed with thong-clad buttocks layered on top. In the center of the emblem, juicy lips part menacingly to expose a golden grill of teeth.

The exhibition also includes some of Newsome’s videos, which capture his ongoing interest in creating emblems and crests performatively. Herald, a black and white video with an original score by the artist, was filmed in New York’s Old St. Patrick’s Basilica and charts his ceremonial coronation as a Herald of Arms. In the video, Newsome processes down an aisle lined with young men in hooded sweatshirts, heads bobbing to the beat. When he reaches the altar, a young woman in a flowing ethereal aqua blue tunic and a young man in a black hooded sweatshirt and blue jeans dub him a Herald by placing a crown on his head that is also part ball cap. For Swag, 2011, Newsome collaborated with artists Laurie Anderson, Kenya (Robinson), Zion Prodigy, Diplo, Erykah Badu and others to create a five-track mix-tape hearkening back to his days DJ-ing his own rent parties in Brooklyn. Video selections from Swag reference works in the exhibition like the short “Dancing with Succubus,” in which a young woman in a gold body-suit softly and seamlessly vogues over a jazzy, deep-house groove with a tangled meld of arms and legs as her backdrop.

With “Herald and Swag,” Newsome offers a bridge among seemingly disparate worlds – fine art and craft, high culture and street vernacular, tradition and innovation. Ceremony, ritual, and tradition have always been important to the art of heraldry and Newsome’s latest re-mix certainly inspires us to find a little swagger of our own. 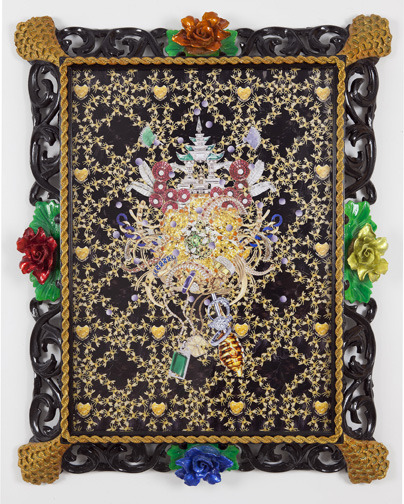