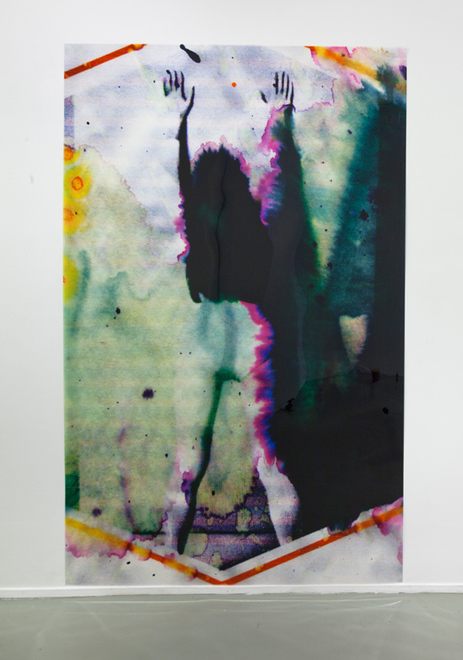 Getting the Waterlog Treatment

Sarah Greenberger Rafferty might be described as a meta-photographer or even a New Mannerist. She photographs altered photographs, many of which are distorted representations of the human figure. Like the artists in the MOMA’s 2009 New Photography exhibition, Rafferty’s work is the product of a process structured around image appropriation and manipulation. What sets her apart, however, is a cultivated aesthetic characterized by a loose, painterly style full of color that spreads and seeps and bleeds, threatening now and again to obliterate the image.

Rafferty calls this technique “waterlogging,” and it’s in full display in her solo show “Remote.” Once she’s selected the image she’ll appropriate—typically from the web—she prints it out on an ink jet then play water across the print’s surface to achieve the desired effect. Because the inks are still fresh Rafferty can manipulate them like wet watercolors, which seems like a delightfully playful thing to do. Her distortions have the natural fluidity of spills and stains; the colors are a different story altogether. They’re vibrant and rich, but call to mind the radiant hues of toxic swamps and sunsets over polluted skylines.

In “Remote,” Rafferty focuses on television personalities, though there is also a quartet of anonymous “figures,” and what might be considered a pair of still lifes. She has installed a freestanding wall at a diagonal in the middle of Uffner’s rectangular space that serves as the fulcrum of the exhibition. On one side Rafferty hung twelve distorted portraits salon style; on the opposite side is Frame (2011), a large photograph of what may have been an unused frame on a floor, which in Rafferty’s work is framing a purple splotch.

The portraits would seem to be the heart of the exhibition, positioned as they are directly in the sightline of anyone entering Uffner’s gallery. I couldn’t recognize anyone, though the press release noted that Steve Guttenberg and Gilda Radner were selected for the Rafferty treatment, which raised the question as to what disfiguring the visage of a comedian might mean. Further distancing her work from the identity of her subjects, Rafferty titles each piece with a given name that doesn’t belong to the person portrayed, i.e. Jo, Kim, Orlando, Kelly, Carol, etc. It’s as if she is playing a game with familiarity, at once presenting popular figures that can’t be recognized and then giving these mangled images first names, like we knew them personally.

All of Rafferty’s images contain a latent sense of violence, though the bodies in her Fig series (all 2011) are particularly brutalized. They appear naked, vulnerable, and pulverized with color, smeared and blown apart like something Francis Bacon might admire. The sense of fragility is enhanced by Rafferty’s choice of material: thin, translucent sheets of acetate. Unlike the portraits, which are modest in scale, the acetates are life-size or just under, which adds to their visual punch.

More blatantly and aggressively violent, the banaly titled Window Piece, (2011), depicts the outline of a human form stuck with kitchen knives. Presumably this piece, which hangs in Uffner’s window, corresponds to that carnival game the Wheel of Death whereby one person throws knives at another who is attached to a spinning wheel. Of course this was a form of entertainment, and in that way the work resonates with Rafferty’s disfigured comedians. It’s also a silly looking piece of art, far less visceral than anything else.

There is also an element of the grotesque in Raffety’s playful compositions, which links her work to the tradition of caricature that is the subject of “Infinite Jest” at the Metropolitan Museum of Art. As has been shown throughout the ages repulsion is the other side of attraction. In Rafferty’s work both are active. 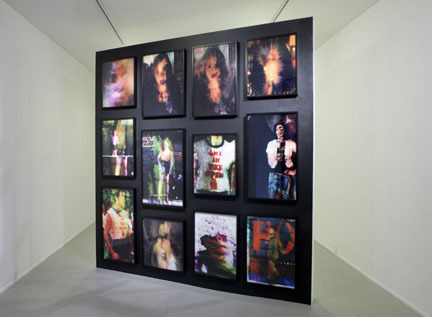