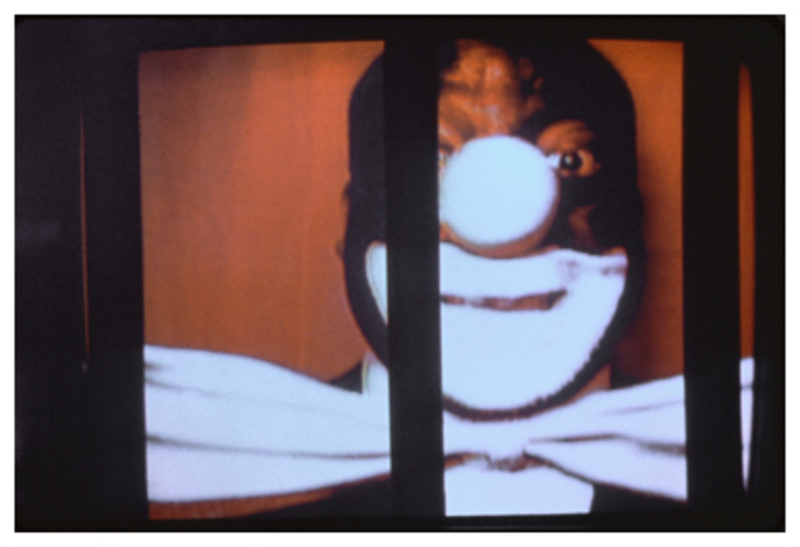 Never Quite Like This Before: Fifteen Years of Gatson

In Three Trips Around The Block, Exit Art presents a fifteen-year retrospective of New York-based Rico Gatson. Through video, sculpture, and paintings, the show traces the evolution of Gatson’s work. There is a particular urgency invoked by showing a retrospective of Gatson’s oeuvre at this specific Obama-era moment. With a national vocabulary entrenched in misappropriations of concepts like post-race, colorblindness, and post-Blackness, we find ourselves coming up empty handed. There is no language that really crawls into the interconnected nuances of contemporary racial tectonics, no tongue to speak those increasingly complicated truths. Gatson creates works that are abstracted familiarities; we know exactly what he’s talking about, but we’ve never seen it quite like this before. 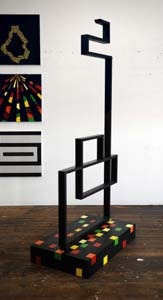 Gatson represents complicated hierarchies in a visual language of pop-bright minimalistic geometric formalism. His emphasis on a radically different mode of perception -- where history and the present coincide, his language filled with symbols drawn from history, pop culture, headlines -- reveals the veiled workings of race in our contemporary moment. In the series of collages featuring a spectrum of Black icons, Stokely Carmichael is tucked in between crisply rendered rays of color in Stokely #2, 2011. In Josephine #1, 2011, Josephine Baker’s form rests at the bottom of the print, three segments of brightly colored beams radiating from her figure. A now deceased, once Afro-sporting pop star whose name need not even be written emits rays in M.J., 2011. These are icons, overdetermined by their evolving significance, sanctified as god-like figures in various distinct, but interrelated pantheons of different narratives of Blackness. They are defamiliarized in the formalistic assemblages Gatson creates. In light of this new context, we are forced to rethink all other contexts.

Gatson’s sculptural series Magic Stick, 2009, shares its title with the Billboard-charted, 2003 single featuring Lil Kim and 50 Cent. In that act of cultural conflation, Gatson writes so many histories onto the visually minimalist components that make up each Magic Stick. Acrylic painted beams, mostly black, a few drawn from his limited palette of warm saturated colors. The stripped-down totems are formed by intersecting rectangular forms. What is a visually and structurally minimalist act speaks to greater, continually unfurling histories. Gatson gives us a new way to see reified scripts of race, gender, and sexuality for what they really are: overly-sanctified relics constructed from building blocks as fabricated as the forms that make up each Magic Stick.

To see a vast body of work from over a decade and a half practice makes Gatson’s project all the more apparent. As he presents us with a re-calibrated framework for thinking through race, Gatson highlights our place within the evolving schema he maps. Our participation in the social construction of race, and its all-encompassing cultural, economic, political career, can’t be denied. Two Heads In A Box, 1994, hangs from the ceiling, a seemingly out-of-place object. The viewer soon realizes that the neatly cut circle on the bottom side of the crate is for sticking one’s head inside. In that moment the piece is truly activated; the viewer adds the second head to the equation, directly facing a video of the Gatson himself dressed in a clown nose, comically over-sized bow tie, in painted black face. His likeness is forefronted by a set of prison-like bars, clearly establishing some kind of divide between viewer and artist-subject.

But what are these two opposing sites we inhabit? In our contemporary racial landscape, it can be hard to parse the particulars, to know how to extrapolate language and action from the sticky nuances of a hegemonic climate committed to “getting over” our collective racial history. Gatson’s work invents a new entry point. If we own up to our part, he suggests, we can begin to see the problematic embedded in the familiar. In the invitation to restructure our interpretive framework, Gatson provides us with somewhere to start. 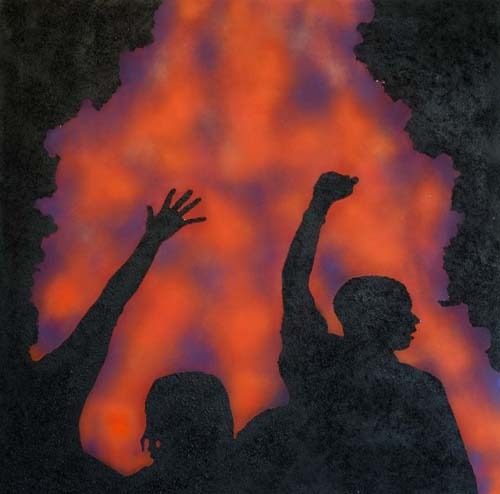