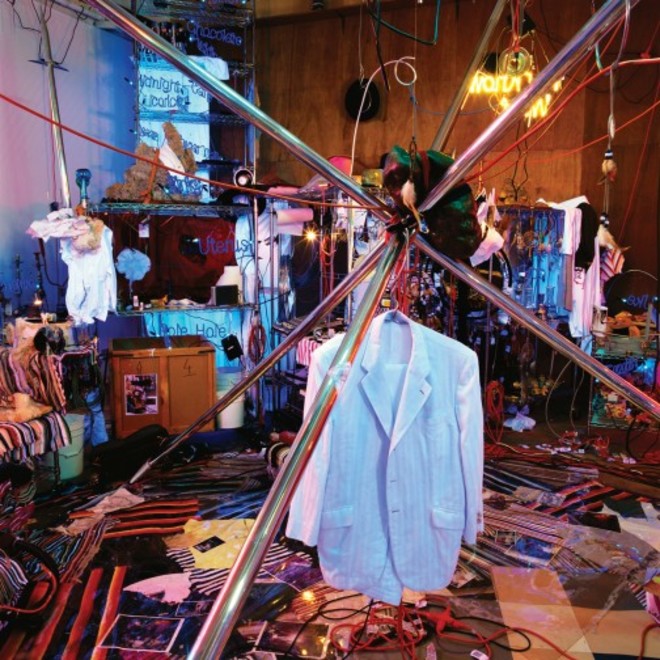 The Age of Prohibition in the Perfect World

by Mark A. Rodriguez

Lately, I’ve been thinking about Jason Rhoades. In particular, I have been thinking how some of his formative years were spent in San Francisco and Oakland studying at The San Francisco Art Institute and the California College of Arts and Crafts (as it was known when Rhoades went there). I think about how his art and personality continue to cast a shadow over the art world despite his death five years ago.

It is strange however that San Francisco never boasts of its relation to Rhoades, or sundry other artists who have lived in the city but moved to a different global locale. How negligent San Francisco can sometimes be in celebrating artists that have lived here. The Bay Area definitely keeps track of its standardized art history, something along the lines of: Abstract Expressionism, The Beats, The Counter Culture, Haight-Ashbury, Conceptual Art—Tom Marioni, George Kuchar, and the so-called “Mission School”—Chris Johanson, Margaret Kilgallen, and Barry McGee. But then it kind of stops, and there are sizable gaps left open in between the major mile markers of the past. Jason Rhoades and his absence from San Francisco art history serves as a good point of departure into looking at many historical issues in relation to San Francisco and its influence on not only its regional artists but on international art.

Jason Rhoades’ sculpture, unique and sometimes boyishly innocent, was huge not only in terms of scale, but also in regards to material, theme, and philosophy. What remains of the man and myth still awaits to be dealt with on a historically comprehensive level, though Europeans have given the trickster artist a greater share of scholarship than his homeland. Rhoades’ sculpture and actions provide everything and nothing at the same time: a starting point with no end, spinning inside itself and spewing out from leaks and cracks onto memory’s pavement. Historically speaking, there is something in the time capsule of San Francisco that can be helpful in forming some building blocks of historicity. Rhoades was part of a collective called FOM, (there is some dissension on what the acronym actually meant) while living in the San Francisco region, a group which, according to Wikipedia, also included Peter Warren, Bill Becchio, Laurie Steelink, Sebastian Clough, and Marshall Weber. He also had a relationship with ceramics, a history which has seen many of San Francisco’s residents playing key roles in its development. Ceramics and the ceramicists probably served as catalysts and influence for his “new-genre” practice.

Like a good detective novel, remnants of this time, whether it be participants, or witnesses, must still be present somewhere. These remnants might further inform amnesia-prone San Francisco of its recently forgotten past. Rhoades is not the only example of neglect in relation to the city and its history.  Perhaps the Bay Area will recognize a more significant amount of players in its past as a result of its attempts at locating and understanding its influence over a broader reaching grid.

After accepting more micro-histories into the overall picture, there is a possibility that the territory will come to change its perception of itself and what wider ranges of art can come out of this creative nexus.  Its regionalism will be compromised in a positive and transformative light.  Its history will bear more fruit, artists will be more informed, and art may then explode with reference, influence, and growth.

The awkward thing is that as it stands now, San Francisco is too regional to notice that it has an effect on the outer world; instead it waits for the world to enter the bay—San Francisco is too proud to beg. To use an example from a slightly different medium, even R. Kelly and Jay-Z have collaborated together, and they live in completely different states, with different music-oriented goals, and styles. Not only do they collaborate to have a good time, but to also propel their shared art form into an unpredictable trajectory, thus advancing the dialogue and their effect on the world. San Francisco, with its artists and academics combined, holds down a specific art history with very concrete totems: key players as it were in making the Bay Area art scene what it is. This way of passing on the art baton is anarchic in view of the fact that the global age has landed, and relativism is a mainstay in a culture made up of varying forms of uncertainty and uneasy definition.

Why close the port, when everyone is opening theirs? San Francisco is so much more than just a geographic area; its history lies outside of the city parameters and has many bastard sons all of whom have something important to say in relation to this place’s past, and the shaping of cultures all over the planet. Global art history is waiting for San Francisco to let the light shine in.

The Fascism of Recent Art History: A Conspiracy of Hysterical Importance
5/16/16

A new and sympathetic masculine mythology Robin F. Williams
3/12/14
COMMENTS (1)
Spot on.
MAR, thank you very much.
Comment by: Maurizzio Hector Pineda on Saturday 10/01/11 at 12:47 PM
ArtSlant has shutdown. The website is currently running in a view-only mode to allow archiving of the content.