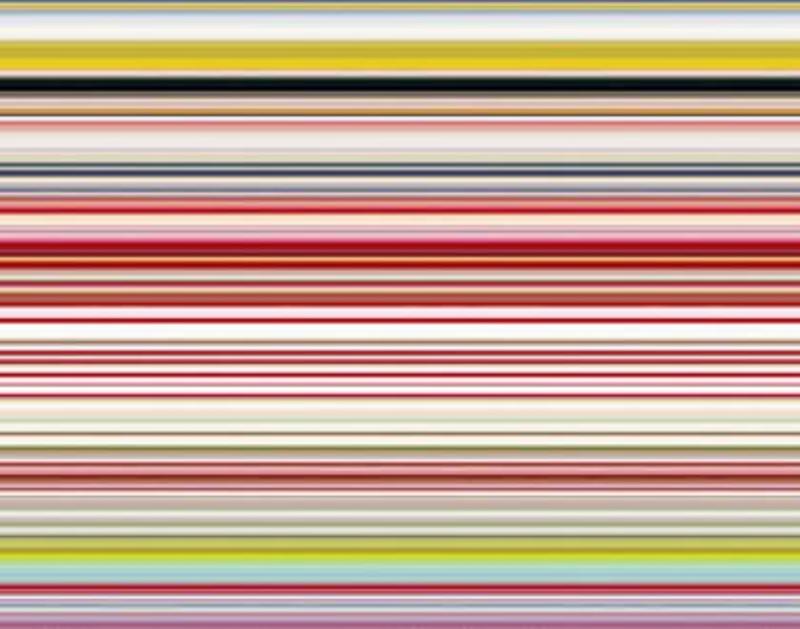 At Gerhard Richter’s latest Paris exhibition, Painting 2010-2011, an exhibition of arguably the greatest living painter, there are two series of images and one sculpture. Ironically, despite the exhibition title, despite the immense body of work that gives Richter his reputation, only one of the series of images is made from the material of paint. And yet, the others, 6 Standing Glass Panes and Strip (2011), the sculpture and a series of computer printouts, have everything to do with painting. Even as he takes the art world into the next period of painting’s evolution, into what some might call, post-painting, Richter’s work continues to engage with the questions that have preoccupied modernist painting in the twentieth and now the twenty-first century: What is painting? What is the relationship between painting and the world of which it is a part, and the world it represents? What is a painter?

The literal and discursive centerpiece of Painting 2010-2011 must be the sculpture, 6 Standing Glass Panes through which over fifty years of Richter’s painting are reflected, refracted, fragmented and performed. The gallery’s publicity flyer claims that the piece verges into architecture and then oscillates with painting. Even the most cursory glance at the glass plates, paralleled and held in three dimensionality by their steel structure, reveals that the glass sculpture engages with much more than architecture and painting. Not only are the reiterations of Richter’s images on the walls mirrored, repeated, blurred and multiplied when seen through the recession of glass panes, but as people wander into the gallery space, a performance begins: the human figure in motion brings the panes alive, again, through reiteration, fragmentation, refraction. Most vivid for Richter connoisseurs will be the blurring of the figure as if it had stepped out of one of the 1960s photo-paintings. And then, suddenly, the performance is done, and the stillness of the perfect squares is restored as they sit, motionless, in the light filled gallery. And so, 6 Standing Glass Panes is architectural, it is performative, sculptural, engaged in the history of Richter’s own painting. It also engages with the history of art when, for example, we remember the enigma of Duchamp’s The Large Glass (1926). 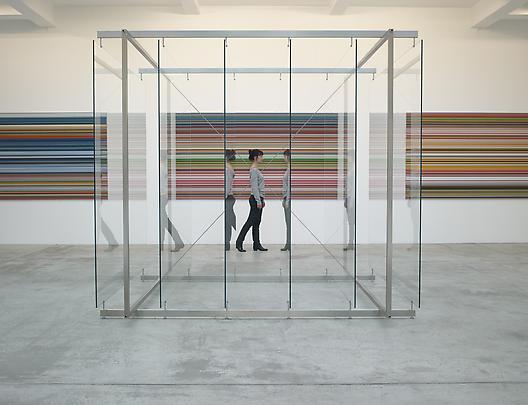 While most critics will disagree with me, I have always thought of Richter’s work as the most articulate example of modernist painting. Indeed, Richter himself would probably reject the label, and I certainly do not want to limit the discussion through compartmentalization. However, even in these works that ostensibly mark a break in his oeuvre, supposedly doing something that he has not yet done before, I see every reason why his work must be considered modernist. It is true that his interrogation of painting at its interface with other media has shifted, most notably from photography (in the photo-paintings, the overpainted photographs, the persistent use of grey paint) to a concern with technology and the computer-generated. Particularly, in the Strip series on view at Marian Goodman in which digital printouts are placed behind perspex. But nevertheless, even in Strip the motivation is the same, the question is the same: what indeed is painting? Richter has been asking this question since the 1960s, the question that is, fundamentally, the primary concern of modernist painting. Though he may be asking the question in a different voice, the question, the language, and the re-invention of an answer, have remained consistent across fifty years. To my mind, this exhibition confirms that Richter is the modernist painter par excellence. 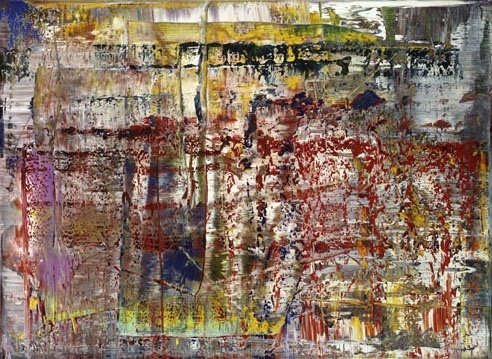 Similarly, Richter’s presence as the artist has been the preoccupation of his painting over fifty years, and the urgency of this concern remains in the foreground of these new works. Even if these are works where the hand of the man has been disguised by the absence of a brushstroke in favor of a computer-generated line, the series of Strip paintings, for example, begins with his 1990 Abstract Painting (CR:724-4). Richter divided the 1990 painting vertically, first in two, then in four, eight, sixteen and so on to 4,096. And so, conceptually at least, Strip is not so different from all of those works he repaints. The works are like the paintings that begin life as a photograph once found in Atlas, and then are typically removed from the archive, manipulated, overpainted, and on through their process of disguise. Strip is a different form of “repainting” that might be understood to meet similar purposes: the interrogation of the interface between two media as a way of determining the role of painting, and Richter’s painting in particular, in the value of representation. Like any of his previous works, Strip is a re-interrogation, a game of concealing and revealing, of creating continuity with the past, even if it is erased through a different technique or technology. 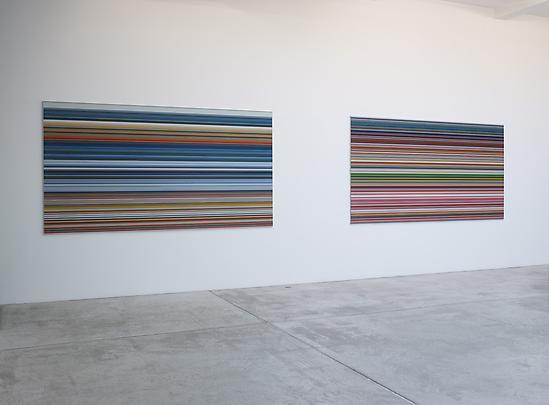 For all of the resonance and continuity between these new works and Richter’s fifty-year oeuvre, there are also striking differences. And perhaps there is none more shocking than the refusal of the Strip series to invite us into their depths and their secrets. When we stand before Richter’s abstract works, especially the large format ones, we watch as the paint and its patterns transform, move, vibrate in front of our eyes. Time spent in front of these works brings shapes we recognize, sometimes because we begin to project onto and into their abstraction. In the case of a series such as Cage I-VI (one of my favorites), the paintings are moody; they shift from cold, through indifferent to vibrant warmth as they engage with the other paintings in their community of six. However, at Marian Goodman when visitors began to study Strip, they found nothing to see, and quickly turned their backs, preferring the enchantment and unpredictability of 6 Standing Glass. Thus, the transformations, fluidity, ambiguity and the passion of painting has now been removed from the painted surface. And in its place, we are offered glass panes that function as a lens through which to discover these qualities in the life that it captures. 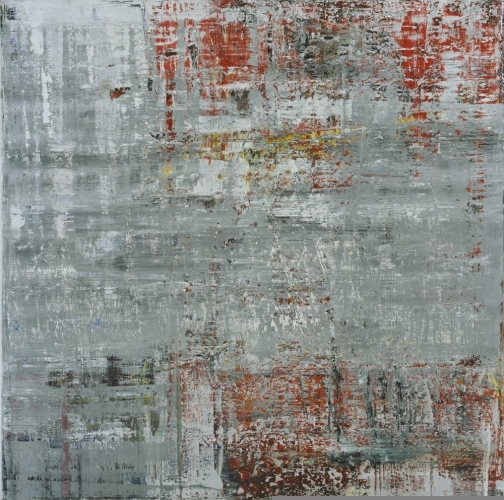 And in true Richter style, the minute I write that, I am reminded that the opposite is also true. In spite of the clinical perfection of Strip, it has an aesthetic beauty. Even though the prints are digital, thus the gesture and eroticism of paint completely effaced, seen as a community, here of five images, they move through different emotions, different temperatures. They resonate, not only with the Abstract Painting from which they are derived, but with all of Richter’s painted series. I was reminded of his squares of color, the windows of the Cologne Cathedral, as these images also look for patterns and logic through repetitions that are always different from each other. The Strip prints are also like Cage I-VI  because they too move through different “palettes” and different temperatures, even though there is no temperature and no palette. I want to project that in a hundred years time when none of us are around, art critics will see these works as just another logical step along the path being trodden by the great modernist, Gerhard Richter. These works are surprising for they show Richter in a different light, but they are also completely in keeping with his oeuvre. They are beautiful, elegant, perfectly controlled, yet still with room for the unpredictability of human interaction. All of them move well beyond what painting can do, and yet, they are through and through painting at its most powerful, provocative and revolutionary.

~Frances Guerin, a writer and film-historian living in Paris.

Posted by Frances Guerin on 9/26/11
Tags: panel installation abstract, glass mixed-media painting
RELATED ARTICLES
COMMENTS (1)
Excellance Works
I like your style, composition and colors.. And wish you success with future works. CurtisKojo
Comment by: Curtis Morrow on Friday 10/21/11 at 6:16 AM
ArtSlant has shutdown. The website is currently running in a view-only mode to allow archiving of the content.