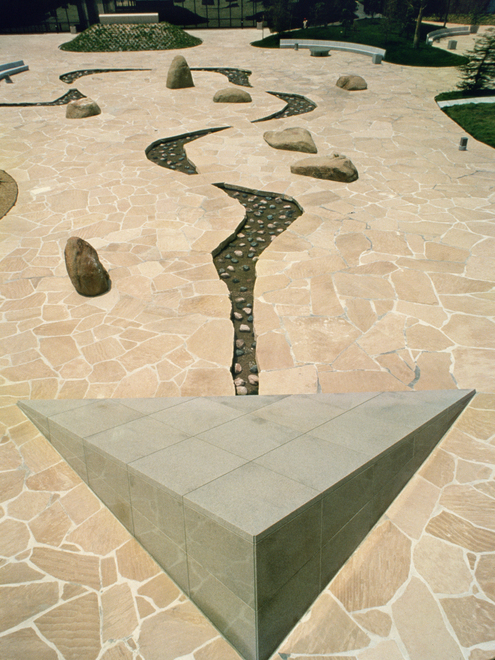 Noguchi: California Legacy currently on view at the Laguna Art Museum, presents two projects created by famous modern sculptor and designer Isamu Noguchi in Southern California during the early 1980’s (a third installation, What is Sculpture?, the artist’s “Akari” series made for the ‘86 Venice Biennale, seems to have been thrown in willy nilly). Of the California works, the most compelling is certainly California Scenario, a sculpture garden Noguchi completed in 1982 on 1.6 acres in Costa Mesa next to the 405 freeway, enshrined by a circle of tall office buildings and, a parking lot.

The story of the garden, commissioned by lima-bean heir and commercial developer Henry T. Segerstrom in 1980, is told in photographs, archival letters, wooden models and a video of the dashing Noguchi on site, overseeing the crane installation of one of the six key works in Scenario, “The Spirit of the Lima Bean.” The sculpture, a twelve-foot high pile of stones stacked on top of one another, appearing to interlock and become one, was titled in dedication to the grounds’ former life as a lush lima bean field (perhaps as well as to the giving spirit of patron Segerstrom), and through a series of letters under a vitrine, it becomes clear that, originally, Noguchi sought to construct it out of boulders retrieved from Joshua Tree National Park, but was cordially denied by the Department of the Interior. 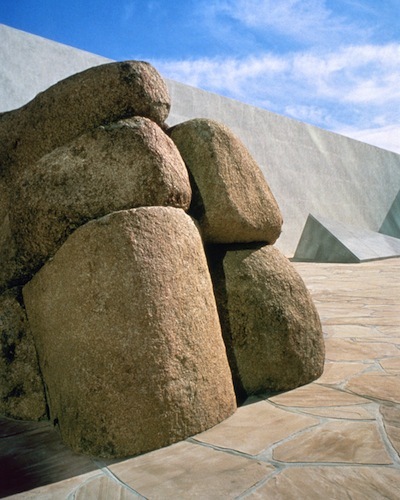 Where the actual materials came from for California Scenario seem of little importance though. Comprised of separate mounds of both native and non-native plants and trees, as a whole, the work in context is notable for what can be seen as an uncompromisingly stark vision of Southern California, where Noguchi was born: the already dry, desert habitat paved over; the occasional landscaped plot meant to connote a lost element of a landscape that never was. “Maybe we destroy natural charm when we impose ourselves,” Noguchi told the LA Times of the project at the time. “The garden is sort of a soliloquy on why the situation is the way it is.” Scenario’s other main works such as “Water Source” (a glass pyramid), “Water Use” (fine cuts in the in ground resembling a path of streams), and “Energy Fountain” serve as symbolic interpretations of the ordering system that makes the state go.

Another story of industrial expansion arises in the section of a documentary on Henry Segerstrom shown in an adjoining room of the exhibition. As Segerstrom describes how his family turned an isolated agricultural community into the location of the most commercially successful shopping mall in America, South Coast Plaza, the video shows photos of the unlikely site morphing from green pasture, to small paved outlet amongst green, to a full blown city built around a mall. Somewhere is the implication that without Segerstrom’s success, the Noguchi commission would not have been possible, while California Scenario comments on the very condition that people like Segerstrom have wrought in Southern California. 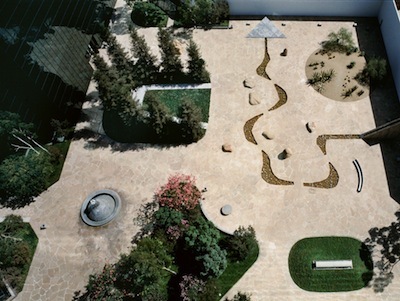 Though Noguchi designed many gardens throughout his life, California Scenario was supposedly his only deal with a commercial developer and perhaps the elephant in the room is the fact that the Segerstrom Foundation is the show’s presenter. Is that why all the figures for the cost of Scenario and Noguchi’s fee in the otherwise candid letters have been literally whited out? Though the Laguna Art Museum is obviously a somewhat provincial enterprise (“Is photography allowed?” I asked a guard during my visit. “Not usually, but for you I’ll make an exception,” was the reply) and even once made its home in a storefront at South Coast Plaza, one still feels that it could be a possible conflict of interest to have the progenitor of a museum’s exhibition so closely involved with the contents of its show. So goes a meta-narrative suggested in California Legacy but these are Orange County politics; LA has its own megalomaniacal art patrons to contend with.

Also on view at California Legacy are the poetic, steel Gemini sculptures Noguchi made in collaboration with Peter Carlson’s studio and there, just outside the museum’s doors, the ocean.