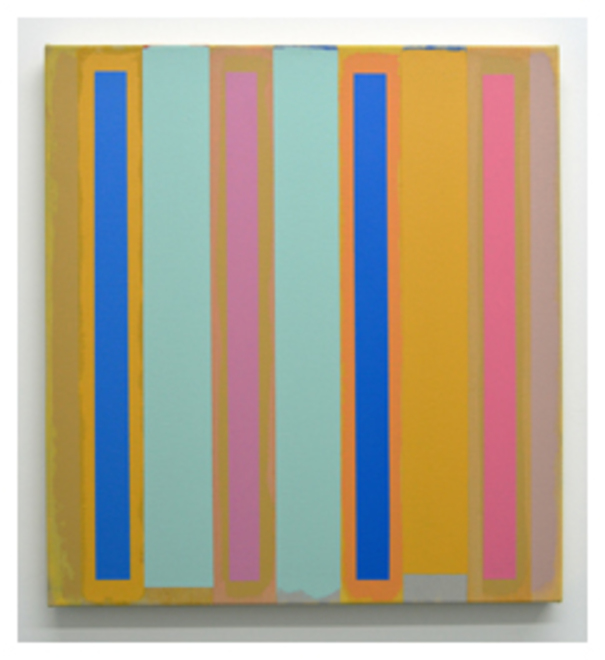 Eye to the Optical Sky

Under the guidance of sculptor Tony Smith and critic Eugene Goossen, Doug Ohlson was hired by Hunter College in 1964. There he, Smith, and Goossen fostered one of America’s most influential networks of abstract color painters. At MINUS SPACE, “Pointing a Telescope at the Sun” presents five works by members of that clique in tribute to Mr. Ohlson, who passed away last year at the age of seventy-three.

Sanford Wurmfeld’s beautfully complex II-27 #1+B (V-RO/N-Y) (2006) depicts two overlapping fields of gradated color, one bright and warm, the other cool and dim at center. Despite a restricted color range, one still gets lost in all their permutations. The border performs an optical, architectural feat: those bright edges lift and carry the cool interior, which leaps forward from its quixotic support system.

Evertz is perhaps the most precise painter of this cadre: there are no smudges or broken edges. Untitled (2011) shows two sets of color-shifting vertical bands, cut by a sharp diagonal vertex. At top, backlit pewter-hued shafts spread outwards. Below, the stripes' luminous symmetry ascends or descends, depending on how one looks at them. Robert Swain’s Untitled 7-25-6 x 11-25-6 x 23-25-6 (2011) shimmies with curvaceous strokes of red, turquoise, and purple, reminiscent of images of cosmic background radiation. Even without hard, straight edges, Swain is just as exacting as the others.

These artists are wizened pros, and with the youngest registering at sixty-six years and the oldest at eighty-eight, "Pointing a Telescope at the Sun" shines with a fresh, contemporary vibrancy that is fit for all ages. 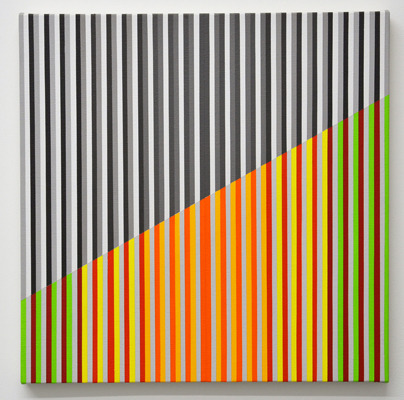 A Hard Edge Barely Contains Them Group Exhibition
1/25/14
COMMENTS (0)
ArtSlant has shutdown. The website is currently running in a view-only mode to allow archiving of the content.