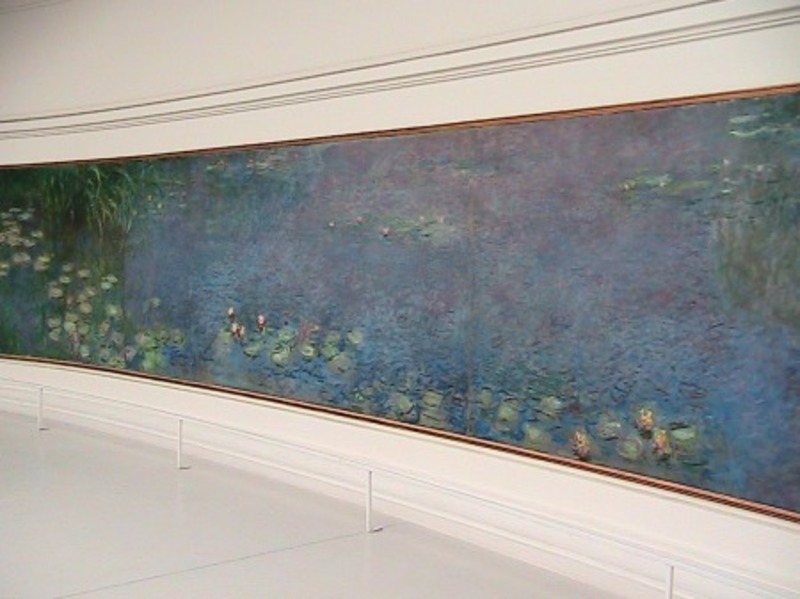 With little happening in the galleries in August, my colleague and I decided to be tourists for a day and visit the Monet murals at l’Orangerie; embarrassingly, neither of us had ever been. Fortunately, the real tourists were out enjoying the sun and we were able to retreat peacefully into the cool, dappled light of the Nymphéas—what we know as The Water Lilies—made between 1914 and 1926. Both of us are big fans of the Monet paintings at the Musée Marmatton in the 16th arrondissement, so we had expectations of the murals in l’Orangerie.

First, I need to emphasize that no postcard, mouse pad, calendar, scarf, tea towel or any other of the infinite objects onto which the famous paintings are reproduced does justice to these works. Primarily because they are not about objects, objectness, or objecthood. The Water Lilies are about color, light, and air as they are expressed through the medium of paint. They are so much more ethereal and ineffable than their reproductions would have us believe. Nevertheless, it is usual for images to choose to reproduce the waterlillies themselves, the weeping willow tree trunks, and those aspects that gesture towards the graspable in an otherwise ephemeral world. These are paintings that are better understood as a preface to Jackson Pollock’s all over drip paintings than as contemporaneous with August Renoir’s tea parties. The eight panels that adorn the purpose-built gallery walls at l’Orangerie are without beginning and end, without horizon, orientation, or scale. Similarly, their perspective is ambiguous, and we can never be sure whether we are looking at reflections on the water or the garden itself. True to their place on the cusp of modernism, The Water Lilies sit somewhere between abstraction and representation. 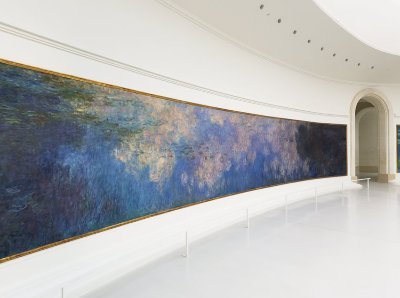 In their panoramic sweep around the oval rooms, The Water Lilies capture the motion of time as the day moves from dawn to dusk, a time that is reflected on the surface of the pond at Giverny, a pond that now has iconic status. Again, while the tourists pilgrim out to Giverny to see “the garden” and “the pond” that inspired these canonical paintings, the works are less about representations of nature than they are nature as the inspirational source of Monet’s search for something in painting, namely its ability to capture things like time, color, light, air. It is interesting, and counter to expectation, to discover that The Water Lilies are not about painting per se. While Jackson Pollock, or perhaps Rothko would be a better example, was determined to explore the properties of paint, to draw attention to the dynamics, the viscosity, the virtuosity of the brushstroke, Monet is more intent on pursuing his search for the atmospheric. And though this is achieved through paint, in Monet’s search, paint is relegated to a vehicle for exploration of the atmospheric, something he finds at the artistic interface between abstraction and representation. And again, contrary to expectation of a painter inspired by reflections and water, Monet’s paint is dry, and worked around the canvas with perhaps a rag, rather than a brush. There are no wet oils or watercolors, but in the interests of prioritizing the pigment, and its representation of nature, the paint is virtually without texture. 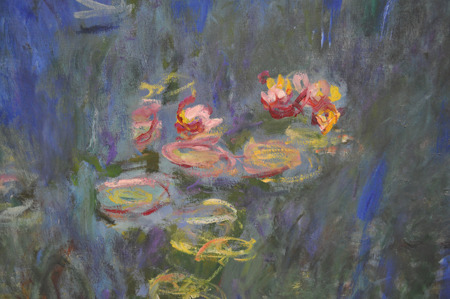 In spite of the apparent radicality of Monet’s paintings, many of the tourists who wandered into the exhibition spaces while we were there stopped to have their photographs taken with The Water Lilies as background. And we found ourselves admiring the color co-ordination of the visitors wearing greens and blues with the canvases behind them. Rather than seeing this contradiction as undoing the progressive nature of Monet’s practice, it is, I would argue, where it becomes extraordinary. Even though The Water Lilies press at the beginnings of modernism, the clarity and vibrancy of the color panels make equally great wall paper. It cannot be denied.

Sprawling Group Shows Deny Black Revolutionary Artists the Space and Time They Deserve
8/24/17
COMMENTS (2)
Thank you for your note
Frances sends along her appreciation...the Team
Comment by: ArtSlant Team on Monday 08/29/11 at 2:52 AM
Bravo!
Hi Frances, Well done on a beautifully written piece that has given me a new vision and appreciation of Monet's work. I will look at it differently from now on thanks to you. Bon continuation, Kevin.
Comment by: Kevin Hayden on Monday 08/22/11 at 9:30 PM
ArtSlant has shutdown. The website is currently running in a view-only mode to allow archiving of the content.