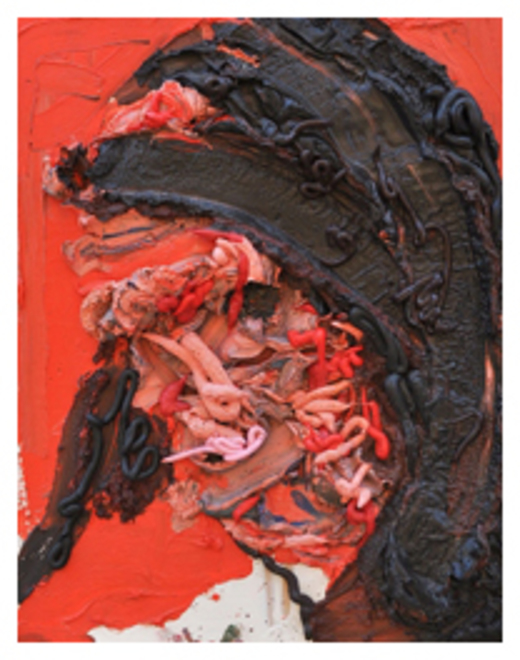 The strength of Kim Dorland’s paintings lies in the way they evoke bodily functions and transgressions, physical and emotional. For Lori depicts Dorland's wife in eleven portraits, which he describes in an interview with her as “truly loving.” The love that’s palpable in these works is clearly the love of paint and surfaces, but Dorland’s interest in storytelling can complicate his aesthetic explorations unnecessarily.

Consider the brooding, twilight setting that Dorland conjures in Stargazing. It’s a recurring terrain in his work, but here it is obvious and ultimately too derivative. Francis Bacon’s strong influence is apparent in this painting and in three works on paper from 2008: a single figure with a warped physiognomy haunting a monochrome ground. But Bacon’s portraits of Isabel Rawsthorne are daunting and unequaled in the comparison Dorland has brought to bear on his paintings. Stargazing doesn’t quite know what to make of the spooked, campfire mood that he imposes on the paint, or with the awkward scale of the ten by eight foot wooden panel. What works, however, is the viscous surface made from lumping acrylic, oil, and crystals together to form layers that jut out like topographic maps.

Sometimes this discrepancy is excitingly visceral. In a much smaller and more intimate painting from 2009, it’s difficult to connect the dark coagulated forms of a faceless long-haired figure, whose features are more like splayed meat and dried blood than they are eyes, nose, and cheeks, to the kind of love that comforts and soothes. Here the tension is more sensuous, returning the focus to paint and its innumerable possibilities. Dorland squeezes the tube directly onto the wood to create red, brown, and pink rivulets of flesh and/or excrement. They remain on the surface, as though love were a bubbling, scarring force that rips apart the beloved’s face.

Mostly, the discrepancy shocks the eroticism straight out of the paint. Though the thick diagonals of gestural impastos, warping the body, can provoke a guttural response from the viewer, something doesn’t sit right. The motif of a bucolic, lounging nude doesn’t match the vigorous network of pink smears and globs. Maybe it’s the bright sap green that pervades the compositions like an ironic guffaw in a moment of intense sexual energy. Yet what could be more honest and closer to the reality of intimacy than the awkward splitting of the mind and body that can occur during sex? No one wants that though. Getting lost in the union of the intellectual and the sensory — isn’t that what we seek in love? 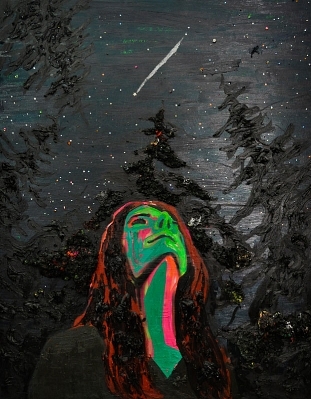 Posted by Aldrin Valdez on 8/21/11
RELATED ARTICLES
COMMENTS (0)
ArtSlant has shutdown. The website is currently running in a view-only mode to allow archiving of the content.