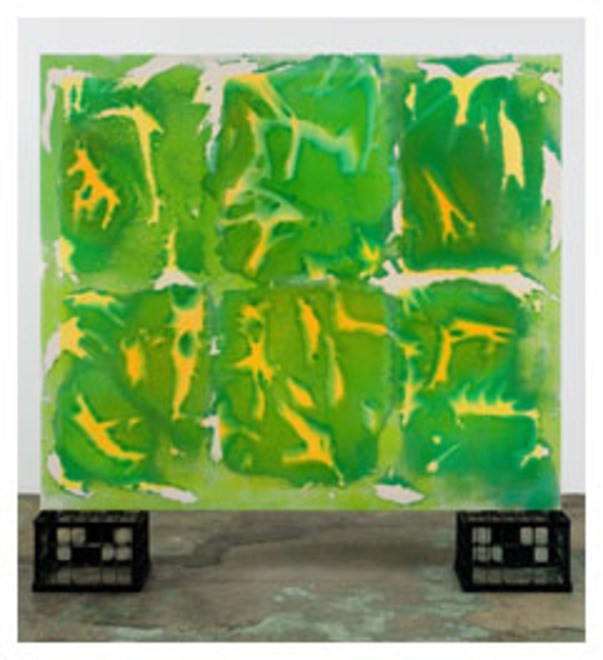 “Affinities: Painting in Abstraction,” at D’Amelio Terras through August 19, aims to describe recent trends and ideas in painting, mostly within the lineage of gestural abstraction. Independent curator Kate McNamara has assembled an exciting and sensuous show charged with untamed histories starting from the middle of the 20th century.

One is first struck by Suzanne McClelland’s oil painting BWP (Bytches with Problems and Brothers with Potential) (2011), and its companion video in a nook behind the front desk. The video fills the gallery with mashed-up hip hop. The painting’s voluptuous curves, stripes, and halo mimic Picasso’s Girl Before a Mirror (1932). In fact, the initials of Bytches with Problems (an early-90s rap group) have been snuck into the painting, attempting to relay the rappers’ embodied language through mark and gesture.

Laurel Sparks’ mixed media paintings excited me most. They’re catchy and bright and youthful, with just a hint of hipness. Metal Guru (2010) has an interiority that sucks you in with wallpaper-like harlequin patterning and drooping black washes. Pink limbs vibrate in spaces made for human anatomy. But just as I breech its surface, I am tossed out again, interrupted by globs of papier-mâché stuffed with goofy plastic or wooden beads that are fun and vexing to wrestle with.

Jenny Monick, Joanne Greenbaum, and Carrie Moyer all play against the information contained in different gestures and materials. They scrape the canvas, flatten velvety mops of color, use glitter or paint pens, or unleash silky swaths of paint with varying degrees of success.

Dona Nelson’s constructions proudly announce their physicality. Nelson’s use of color and variety of effects is engrossing. Looking at Lunar Eclipse (2011) one discovers more and more intricacies. It hangs from the ceiling, visible on both sides. Yellow and blue acrylic stains are sometimes misty, sometimes sharp. The floating miasmas are gridded with dripping ridges of gel, and one suddenly notices bits of plywood stuck to the edges, or the tiny holes poked into a constellation of blue spots.

Polly Apfelbaum’s tabletop set of small plasticine tiles, decorated with colorful, rubbery polygons, are the only hard-edge pieces in the show. However their colors, shapes, glitter, and whimsy create unforeseen links between the room’s varied offerings. In the smaller front gallery, John Morris’s geometric drawings complement “Affinities,” adding another wing of abstraction not much present here. 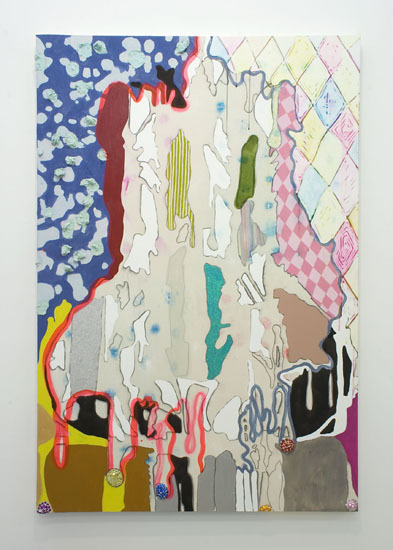