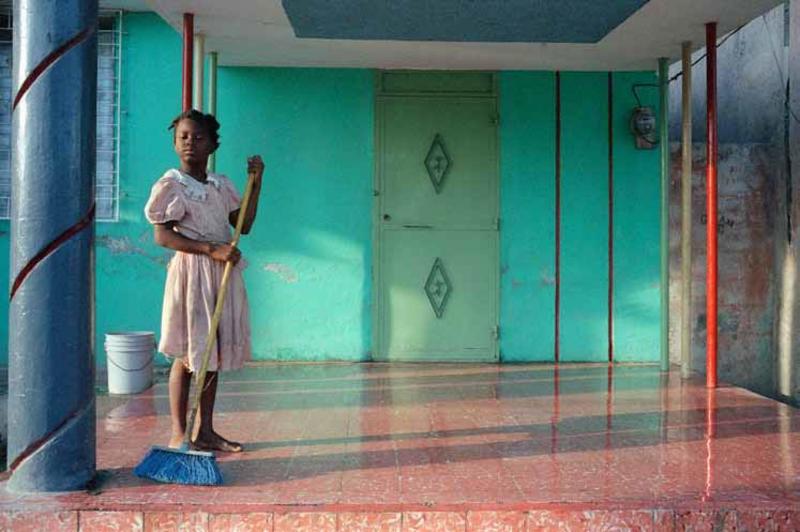 Continuing my theme of the marginalized at the mercy and manipulation of the authorities, I went to see the Jane Evelyn Atwood retrospective at the Musée Européene de la Photographie. The exhibition shows four of her main series, with a sprinkling of some of the “other” work.

Atwood's work belongs to the genre of photography that sits somewhere between photojournalism and art - the compositions are powerful, her use of light is clearly very staged and very expressive, and yet her task is, as one quotation from Tony Judt written on the wall announces: "to tell what is almost always an uncomfortable story and explain why the discomfort is part of the truth we need to live well." These are heavily stylized works that shed a light on stories that need to be told.

The most powerful series of work on display, by far, was that of women prisoners: Too Much Time. The series is compelling because they are photographs that can potentially change the world, and simultaneously, their subjects will never make peace with the world that has made them who they are. Thus there is a tension in these works that has already left the victims of landmines, the blind, the prostitutes in other series. Atwood includes written commentary on the images of the women prisoners, commentaries that were moving, heartbreaking, telling the incredulous stories of the unfortunate women. However, I have to say, the story told by the photographs was different from that told by the text. This isn't necessarily a bad thing, but at times the text detracted, perhaps because it had to for political reasons, from the skill and far more subtle power of the images. Where the images told of the coldness of the cell, the absolute discontinuity between the steel bars, the rigid lines and walls of the correction facility railing against everything we know of what it is to be a woman, the texts narrated the more one-dimensional injustice against the women.

While I found the textual commentary detracted from the power and complexity of the photographs, I still cannot get out of my mind one piece of information: the fact that most of the women in the prisons were there doing time for some kind of violence provoked by men, on behalf of men, or together with men. Atwood's point is that women are not inherently angry and violent, but that they have to be if they are to survive in a world driven by men.

What is striking about the images is their depiction of an absence, the absence of a place for all of the things that girls growing up to be women learn along their way, what defines us and who we are: the magic of reproduction, being a mother, the vulnerability of being a woman in a male world, the adventures of femininity. These are women whose humanity is effaced, whose womanhood is denied, and whose femininity is erased without trace. And yet we can’t help but sense it, hovering in the slithers of light that illuminate them in Atwood's photographs. The conditions of incarceration are frightening, the clothes express nothing of who they are, the isolation captured through the lighting creates just enough space to stay alive, but no more. 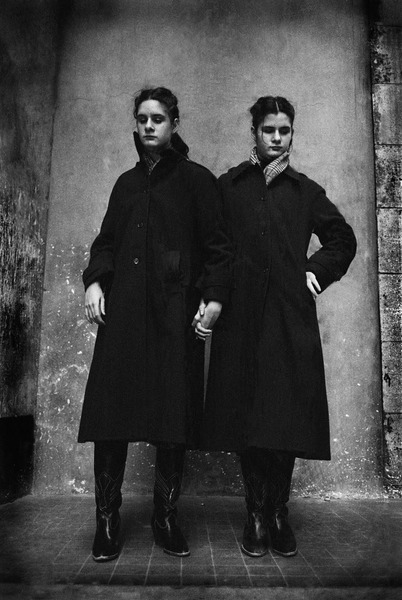 One photograph shows four women’s arms, carved up by the destruction of their self-mutilation. Though it is not surprising that women would turn to cutting as a way of expressing themselves, the openness with which these women display their trauma is heartwrenching. In a world where their only option to regain control is to cut their bodies, with the only outlet for emotional turmoil being the violation of their own bodies, how else would they articulate their pain? And yet, because such scars of incarceration and maltreatment are usually kept hidden by those who self-harm, it’s shocking to see what these prisoners have been forced into.

In a nearby photograph, four young women lay their head on the shoulder of the next. It's the only image that comes close to capturing the humanity of women who have been brutally violated in everyway by the States that imprison them. And again, we are not surprised to learn that there's no difference between incarceration in Russia, North Carolina, Canada or southern France. In a world where globalization, the power of the international, transcultural and so on are routinely annexed by historians and cultural critics, one wonders why the brutality of this international phenomenon has not drawn more attention.

Even though I was drawn to the series on the women prisoners, I must mention Atwood’s ongoing project of photographing the blind. There is something delightful about these images, perhaps because of the way that the blind people, especially the children, behave in front of a camera. Atwood is quoted in one of the texts that accompany the photographs: “blind people don’t know how they look, want to look, or are afraid to look to others. They have none of those referents, and so don’t prepare themselves for the image. This lack of self-censorship often makes the pictures more interesting, if not necessarily easier to create.” What struck me about the images of the blind as Atwood caught them was their ease with themselves, their total acceptance of being seen and not seeing. The figures were playful, often caught in motion, and thus, giving a sense of physicality. Not only their own physicality but also, through the camera’s attention to touching — each other, a cat, braille script or and other objects — the tactility of their engagement with the world is extremely present to the camera.

There are many questions left unanswered by this exhibition, and I came away wanting answers. I wanted to know more about Atwood, what motivates her to photograph people on the edge, people whom society has thrown away to rot on a garbage heap, people whose lives are deemed unremarkable or unworthy? I wanted to know her trauma. I wanted to know what draws her time and time again to those who have been wounded, broken even. I wanted to know how she managed to get inside the jails, the bedrooms, the playgrounds where she found the prisoners, the prostitutes and the blind. What makes her want to fight on their behalf? It's a strange question to be asking of a photographer because that's just the point, that the work should speak for itself. But there is nothing in these photographs or the accompanying texts that tells me why and how she went where she did with her camera. Atwood crosses a line and has access to worlds that most of us don’t even know exist, and because her presence on the other side of that line is so dominant in the photographs, it arouses intense curiosity.