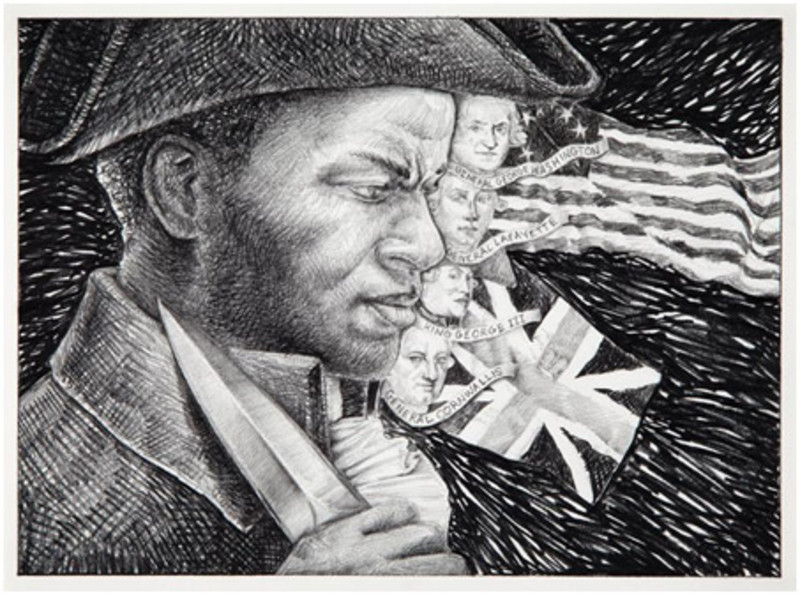 Revolution Is His Drug by Mayukh Sen

for Artslant by Mayukh Sen

From Tokyo Rose to Hanoi Jane, the wartime spy has intrigued, surprised, and repulsed us. The rebel straddles that curious line between patriotism and treason, becoming something of an abstraction in the process. This mythical, abstract quality is precisely what Kenseth Armstead seeks to deconstruct with Spook: Invocation, the multimedia artist’s first solo exhibition. He humanizes a fable – that of James Lafayette Armistead, a slave-turned-spy whose actions were crucial to the outcome of the American Revolution.

The historical narrative Armstead retells takes the form of a graphic novel, a medium close to the artist’s film and video roots. It’s split into three chapters, all on display at LMAKprojects, a gallery in the Lower East Side where the exhibition opens today. A number of splash pages from the book, etched in graphite pencil, line the walls; a bound copy of the first chapter, entitled “Inferno”, sits on a coffee table near the front of the gallery. At the far end of the room, there’s a tall wooden panel, a dazzle of colors and lines. It’s a domineering spectacle, grotesque and alluring. Armstead calls this a “dead zone”, typically a pile of war dead awaiting burial. This particular dead zone stands in for all those nameless African-Americans, faces the public eye has refused to recognize, who died fighting in the Revolutionary War.

Installation view of Kenseth Armstead’s ‘Spook: INVOCATION’ on view at LMAKprojects. Courtesy of the artist and LMAKprojects, NY.

The similarity between the names – Armstead and Armistead – isn’t coincidental. Sitting across from me in the small, slightly cramped gallery space, Armstead tells me he how discovered the story of this intriguing figure. Nearly four years ago, after doing a Google search of his own name, Armstead came across a blurb about this zealous, brave wartime hero he knew very little about. “Self-googling can lead to a lot of interesting things,” he jokes. “But I didn’t imagine this would happen.”

Armstead, who now lectures at NYU-Poly, is a warm, self-assured man, but he’s also incredibly fast-paced and spontaneous. It’s a creative impulse that bleeds into this work – his images are gestural, seductive, and a little rushed. Armstead’s passion for this subject isn’t contrived in the least. It’s alive in every frame, from detailed, humanistic close-ups of Armistead to lush renderings of landscape.

A page from Kenseth Armstead’s ‘Spook: INVOCATION’ on view at LMAKprojects. Courtesy of the artist and LMAKprojects, NY.

The pictures breathe with fury, speaking of a history that simply hasn’t been told. The American Revolution, after all, has been disseminated from a largely white, bourgeois male’s perspective. Where were the slaves, the newly-freed indentured servants, the outliers during this crucial time in our country’s inception?

Answering this kind of question, of course, required years of research. After that chance encounter with Google in 2007, Armstead spent two years conducting historical research on Armistead. As he began to draw, however, he discovered the paucity of pictorial documentation of Armistead, which led to an additional year of picture research. The Armistead in the graphic novel looks an awful lot like Jamie Foxx – an influence I initially expressed some skepticism over. Foxx struck me as entirely too macho, too emotionally distant a model for a character marked by his idealism.

Armstead modeled his figure after Foxx, however, simply because the sole existing portrait of Armistead resembled the actor. I realize only now that he’s the perfect model for the kind of character Armstead seeks to create – Foxx, with a heavy-set jaw made for gumption, presents a complex view of manhood, at once both dangerously sexual and fiendishly attractive.

Perhaps the greatest triumph of Armstead’s graphic novel is that he has succeeded in creating a flawed, albeit very human, character in Armistead. We see a fear in his eyes, a struggle for self-acceptance, a feverish intensity that marks his political bravura. He’s sexually alluring, too – revolution is his drug, Armstead insists. It gives him life force. All of these elements create a rather convincing portrait of a hero whom few have acknowledged.

A page from Kenseth Armstead’s ‘Spook: INVOCATION’ on view at LMAKprojects. Courtesy of the artist and LMAKprojects, NY.

Fittingly, Armstead conceived this project for his African-American family. The slave trade, through its violent commodification of humans, has limited the kind of access African-Americans have to their ancestry so many others in this country enjoy. Armstead, then, wanted to disseminate information about this historically-forgotten narrative to this audience, so as to destabilize the typical notion of the Founding Father.

Nevertheless, Armstead’s project is not simply a drawn-out exercise in political correctness. At one point, I asked Armstead if he felt he was limiting himself with this American audience. After all, the ideas he engages with in this project are, to put it frankly, very American. He confronts the nuances of our own racial politics that may confound audiences unfamiliar with America’s racially-charged political climate.

The concept of the American Revolution, Armstead claims, is largely misunderstood in an international context. Spook: Invocation fosters the sort of complex historical dialogue that some of the greatest graphic novels of the modern era, from Maus to Persepolis, have ignited. He directly challenges the historical amnesia that has plagued how many, both at home and abroad, have come to view America. Armstead addresses, in essence, how we depend on the image to construct our collective historical memory.

Posted by LMAKgallery on 6/23/11
RELATED ARTICLES
COMMENTS (0)
ArtSlant has shutdown. The website is currently running in a view-only mode to allow archiving of the content.