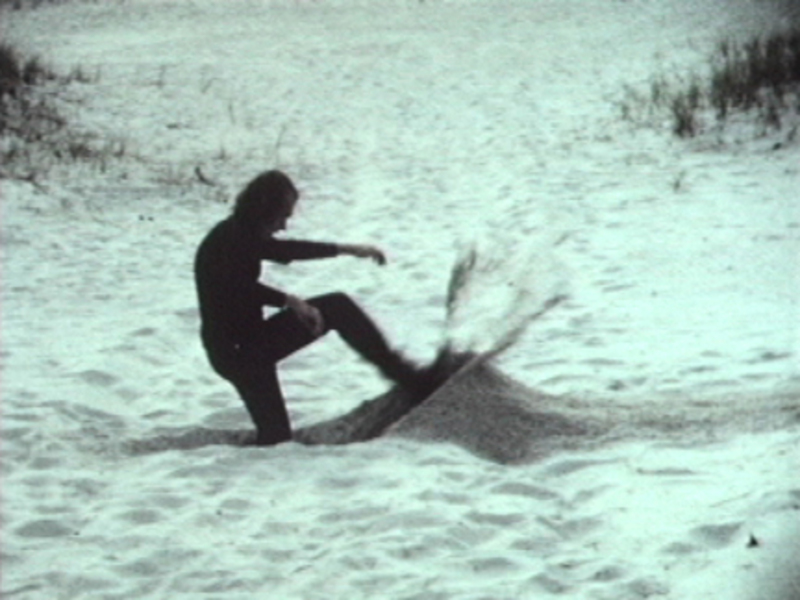 “Interventions in the Landscape,” the group exhibition at Galerie Lelong, is an examination of the rather acrimonious relationship humans have with the natural world.  Documenting their creations, performances, and investigations through the uses of photography and film, seventeen artists expose the social, political, and emotional implications man-made actions have on our surroundings.

In each of the works, made between 1968 and 2010, not only has a human presence been unceremoniously forced into the landscape, but also the landscape is, in turn, obliged to exist around the presence, often evoking a grim mixture of violence and resignation.  Rosemary Laing’s Burning Ayer #6 (2003), a panoramic C-print of vast desert overtaken by smoke and flames, suggests it is in this behavior that the natural environment ceases to be the static subject of artistic expression and transforms into the catalyst. 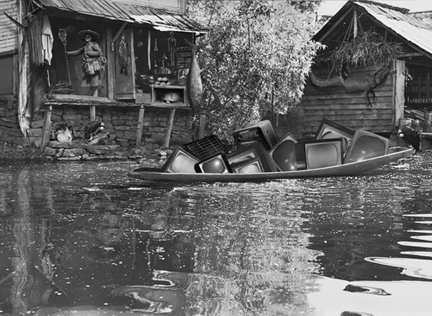 Performance artists Vito Acconci, Joan Jonas, Gordon Matta-Clark, Anna Maria Maiolino, and Cildo Meireles respond to nature’s dynamic supremacy as though it were the antagonist in a play.  Acconci’s silent Super 8mm film Digging Piece (1970) documents the artist as he emphatically digs himself into a hole with his feet.  Though his enthusiasm is evident, Acconci is no match for the harsh wind that insistently blows the sand back into its rightful place.  Jonas and Matta-Clark also fight torrents of wind that inform their movements, while Meireles performs a feat in gravity as he balances on his head in Atlas (2007).

For Andy Goldsworthy, Ana Mendieta, and Dennis Oppenheim, natural forces such as wind, waves, and gravity both impede their actions and facilitate them.  Salt Flat (1969), Oppenheim’s 50x100 foot rectangle of salt, was meticulously spread across a New York City parking lot.  Just as the concrete jungle of Manhattan was altered by this surreal introduction, the salt scattered with gusts of wind and disintegrated in rain, leaving nothing but speckled traces of its existence.  Similarly, Ann Carlson and Mary Ellen Strom’s collaborative video Four Parallel Lines (2007) depicts the steady erasure of man-made markings.  Four men walk along the beach, dragging wooden planks that leave a pattern of four parallel lines in their wake.  Creating a meandering border around the oblique seashore, the lines are gradually wiped away by the approaching tide.

Appealing to the landscape as a medium for social discourse, Alfredo Jaar, Hélio Oiticica, and Petah Coyne construct a series of actions and sites charged with social and political connotations by tilling soil, planting trees, and placing urban objects in unexpected pastoral spaces.  Instead of creating interventions in their surroundings, Jane Hammond, Catherine Yass, and Krzysztof Wodiczko document the bizarre environmental intrusions already in existence.  Hammond’s silver gelatin print Spells (2008), an absurdly witty depiction of technology’s ubiquitous invasion, is a humorous portrayal of a television-filled canoe drifting across a river in a small, rural village.  Conversely, Yass and Wodiczko’s images of monolith-like cement structures invoke images of hostile invasions and post-apocalyptic calamity.  By appealing to the landscape as active participants, these artists rupture the conventionally inert veil that so often obscures representations of nature.