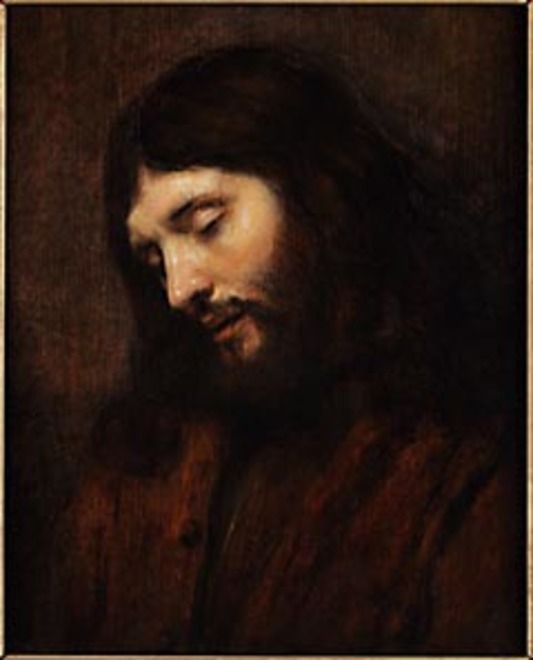 This small exhibition is not groundbreaking; at least its proposition as an exhibition will be of no great revelation to anyone with even a fleeting knowledge of Rembrandt's painting. The premise is to demonstrate what we already know: that Rembrandt painted his Christ figures after "real life." The subtext that he was more interested in the representation of emotion than he was in biblical narratives is equally indisputable. Given the predictability of the exhibition narrative which is designed to give a context to one of the museum's treasures — Christ in Emmaus (c.1628) — I found myself skipping the context (the Louvre's own Mantegnas, Dürers, and so on) making a bee line for the Rembrandt paintings, prints and sketches. The great joy of any exhibition that includes no matter how many or few of Rembrandt's paintings is the inimitable experience of being in their presence. I want to say that it is as mesmerizing, surprising, awe-inspiring as is the presence of Christ to the disciples and Pharisees in the paintings. I feel as though I am in the presence of something mystical, something that can't be explained, something that will change my life when I stand before a Rembrandt painting. 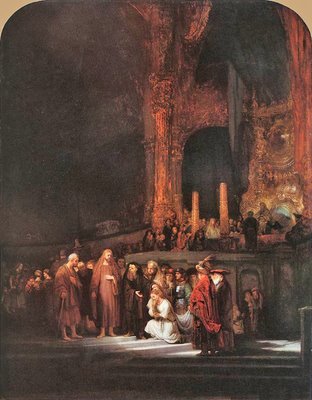 Like few other 17th century Dutch paintings, the brilliance of color as light has to be seen to be believed. Even if one were to see only one of Rembrandt's paintings that are on display in this exhibition, it would could not be forgotten. The light that envisions Christ's appearance at Emmaus is so bright that it is blinding. As I stood at the entrance to the exhibition and saw this extraordinary work of art in the distance I was breathless: the power of the luminosity created through color as light painted 380 years ago can't be put into words. As it literally beamed across the ten-foot-wide gallery between me and it, I felt like St Matthew: called. 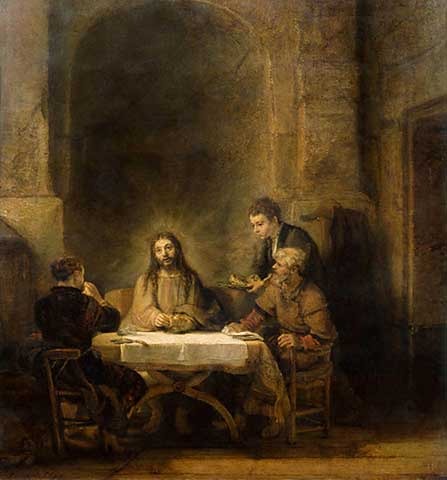 And as we see again and again in these images, what matters to Rembrandt is not the background, the place, the details of the scene, what matters is the creation of light through color and, in turn, the illumination of a relationship between Christ and those to whom he appears. It is true in paintings such as Christ and the Woman Taken in Adultery, the fabric of the clothes is exquisite, and in Christ with Folded Arms, the hand expresses as powerfully as the face. But even in these paintings, the color as light that enables the detail is in tandem as the focus of the image. What's important in the scenes at Emmaus is not that no one is eating — afterall at this one above, there is no food on the table as the Bible would have it — but the moment of  revelation and recognition before the disciples. The awe and wonder of the disciples at Christ's appearance is fully imagined and enabled by the brightness of the light that emanates from him and enlightens their faces. Again and again, we see Rembrandt's fascination with that moment of appearance, and the challenge it poses to capture the impossible array of emotions from disbelief through surprise and awe. 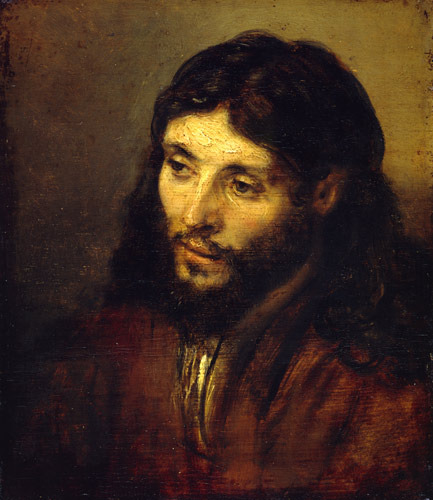 The blurb on the wall at the Louvre claims the mystery and ambiguity of this portrait of Christ lies in his look, in the uncertainty of the narrative that surrounds him. But as I have said before, what is mysterious about this, one of his most famous representations of Christ is something wholly different. For me, the mystery lies in Rembrandt's ability to create an image that is so inconceiveably perfect. The exhibition included many images by followers, which was instructive. Because each and every attempt to do what Rembrandt had done was impoverished. Whatever it is, there is always something that the follower and the student do not manage to capture. In the Rembrandt portraits everything comes together so perfectly: the soft silken skin, the intense, sad gentle eyes that are both soft and very powerful. Likewise the eyes on Rembrandt's figures look inwards, lost in contemplation and at the very same time follow our every move around the museum. Other painters were never quite able to imitate the composition, the distance of the figure within the frame, and of course, the balance and intensity of light that is the energy and magic of Rembrandt's canvases. If Christ's image is iconic today, is it surely the light to which we are drawn, to which we are called to worship?