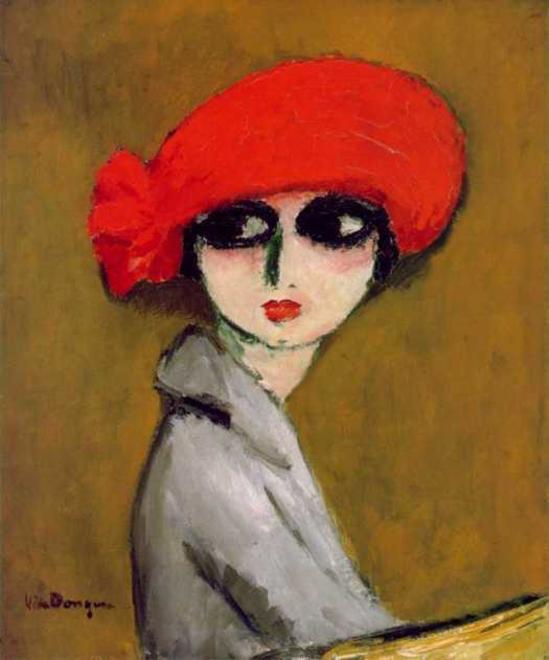 I knew very little about Kees van Dongen's painting before I visited the current exhibition at the Musée de l'art moderne de la Ville de Paris. I had seen and loved The Corn Poppy, in the Museum of Fine Arts in Houston, but as we all know, one work in isolation usually does not give a clear perspective of an artist's work. And for the most part, my introduction to van Dongen's oeuvre was colored by high expectations and inevitable disappointments. 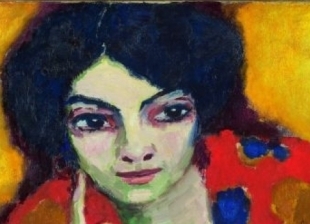 My overwhelming sense of van Dongen's oeuvre was of its derivation. I saw a painter who was swept away by artistic trends and tides, an artist who did not create an overall sense of development through his oeuvre, but rather, one who went from style to style in search of how best to express himself. This lack of coherence was identifiable not just in the influence of the great French fin de siècle painters — Monet, Cezanne, Manet, Gaugin, Toulouse-Lautrec, Picasso, Rouault and the list goes on — but the influence of their German counterparts, such as Kirchner and Marc, was also alive on van Dongen's canvases. Even more than an influence, one might even claim that van Dongen imitated their style and concerns. Whether it is in the thick and short, textured strokes of Cezanne, Gaugin's vibrant colors, or Kirchner's thin, elongated female figures, the styles of all the painters in his midst overwhelms van Dongen's canvases. 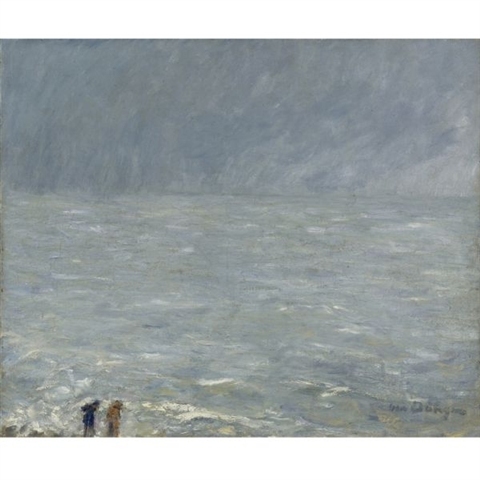 All of that said about the originality of van Dongen's paintings, I was nevertheless enchanted by the skill with which he painted water throughout his career. Every time van Dongen turns to a body of water, whether it be the sea in winter, figures battling the rain in the streets of Paris, or a lake  at dusk, the light reflected on the water makes the canvas glisten, as though it was painted yesterday. In Maisons à Amsterdam, for example, the light is so delicately reflected off the buildings through his use of coagulations of white paint, we might easily be mistaken to believe that the rain just fell and we start to smell the sweet, still damp air. Often when he paints water, nothing else in the image matters, and the focus on water tends to lift the representational into the abstract as though the canvas is a receptacle made for color and light. In a 1905 work such as La Nuit, the rain literally takes over as the subject of the painting. The figures struggling through the thick sheaths of rain are somehow only present to illustrate the density of the water as it fills the air, colors the buildings and floods the streets. And when he paints Le Carroussel also in 1905, in the wielding of white paint to articulate motion at night the image not only becomes abstracted, but the canvas is transformed into a three-dimensional sculpture through the thickness of the paint. 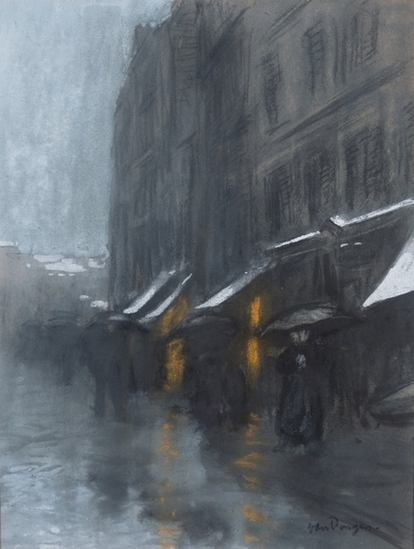 My favorite room in the exhibition however is the final one in which a series of 1920s portraits sit grandly. Unlike the women of the street, dancers, prostitutes, circus women that van Dongen turned from nobodies into royalty in the 1900s and 1910s, the women in the 1920s portraits are already women of an elevated social standing.  But it is not their social place that makes these paintings interesting, and for me, nor is it in the flattening out of all perspective so that the figure appears suspended on the surface of the painted world. Though it must be said, the compositional features of these final works in this exhibition are noticeable for their realization of concerns that have recurred throughout the past twenty years of painting: the elongated bodies, the gesture towards the diagonal, the clear compositional and conceptual engagement with the concerns of modernity and modernist painting. However, what is striking is that in the final room of the exhibition this is all painted in grey. The clothes are grey, the furniture and fabric in their midst is grey, their backgrounds are grey. 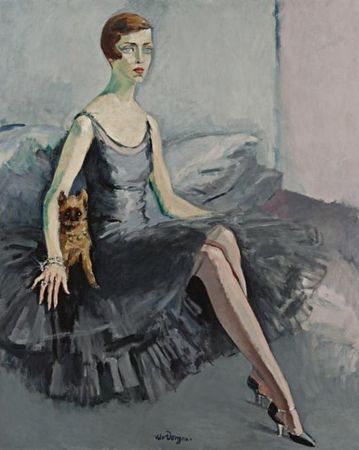 And I want to know, why does a painter who has spent a lifetime seeing the world and its women in a palette of rich, sensual, passionate colors, all of a sudden, turn to grey? The standard interpretation of the grey palette is that it somehow reflects the depression and melancholy of the world in its midst; considered to be a non-color by many art critics, it is used in the face of a Beckettian nothingness, or at best a communication of the negative. And yet, here in van Dongen's grey men and women, there is nothing depressing, grim or non-existent. On the contrary, these greys fill the paintings with a luminosity and an energy that appear to have rippled out from the bodies of water in the earlier work. These portraits that echo the very personality of modernity, typified as it often is as the period of industrialization, are nuanced; they are as rich in their complexity as any of the earlier work in color.

Under the Radar: Gabrielle Shannon | Cherree Mallette | Patrice Stanley
11/29/18
COMMENTS (0)
ArtSlant has shutdown. The website is currently running in a view-only mode to allow archiving of the content.