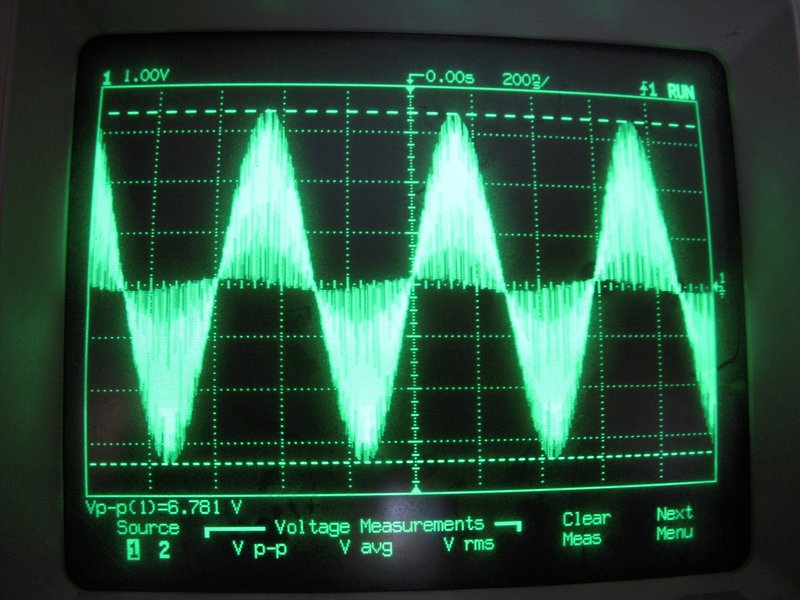 Los Angeles, July 2011 - Luke Fischbeck is an artist and musician living in Los Angeles. Along with his partner, Sarah Rara, he has performed and recorded music as Lucky Dragons since 1999. In 2005, Fischbeck and Rara also founded the Sumi Ink Club, a drawing collective that “uses group drawing as a means to open and fortify social interactions that bleed into everyday life.” In both ventures, Fischbeck has toured the world and been a part of numerous shows, including the 2008 Whitney Biennial. ArtSlant caught up with him while he was in London, installing Lucky Dragons’ work at the Agency gallery (and leaving for Venice shortly to perform in collaboration with the Danish artist FOS), to talk about the radio station he is starting with two other partners in LA, KCHUNG. 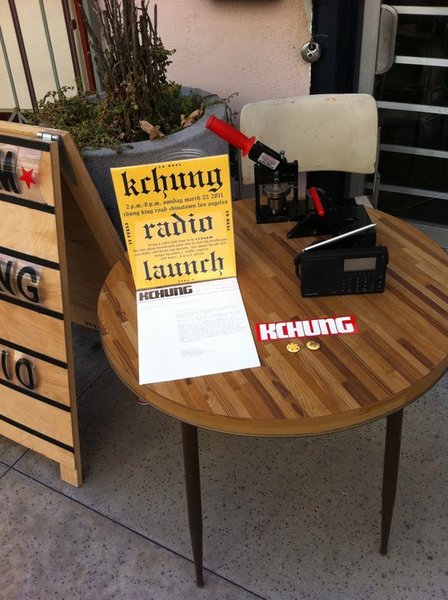 Kate Wolf: Tell me all about KCHUNG.

Luke Fischbeck: It’s Solomon Bothwell, Harsh Patel and myself. Harsh is the graphic designer and Solomon is an autodidact, he just keeps learning. It’s really inspiring how much he’s teaching himself—he says he wants to figure out to how to make an RF amplifier so he goes and figures out how to do that.

Somehow the three of us are kind of a nice mix about the aesthetics and ethics of what we want to do with it, which is, I think, to make something that’s very localized.

KW: Who listens to it?

LF: Right now with the low power AM transmitter you can basically see anyone that’s listening because it’s such a small area that it broadcasts to, or you can hear the other radios; it only broadcasts a few hundred feet. We have an RF amplifier that will make it up to a twenty-mile range. I think we’re going try and limit it to neighborhoods, starting with Chinatown but also go and move it around to different locations. We did a thing at the Pacific Design Center just in the upstairs floor, the Art Loves Design area—it’s a weird zone. It was for New Atlantis Enterprises, Piero Golia’s project. We just set up a transmitter in there—it’s a very portable transmitter that we can set up in different places. It’s the kind of thing that could be really nice for barbecues or maybe driving around in a van or having it in different places for little residency times.  But I think there’s also this impetus to make it a serious radio station, something that would fill a niche in LA, some really community feeling radio thing, which is a complicated idea because of how diverse and fractured LA is already. We have to start small and build carefully but also take a lot risks. When we put out the call for submissions, we got hundreds of show proposals, not just from LA but worldwide, so a lot of people are sending us prerecorded things or they’re streaming things from other places. There are a lot of simultaneous broadcasts with other radio stations. At the moment it’s pretty all over the place. When we did the launch it was a daylong live programming thing. We had eight different shows happening and it was amazing, this feeling of a live radio event, having to keep things organized and getting everybody into the space to do it together. That was fun. 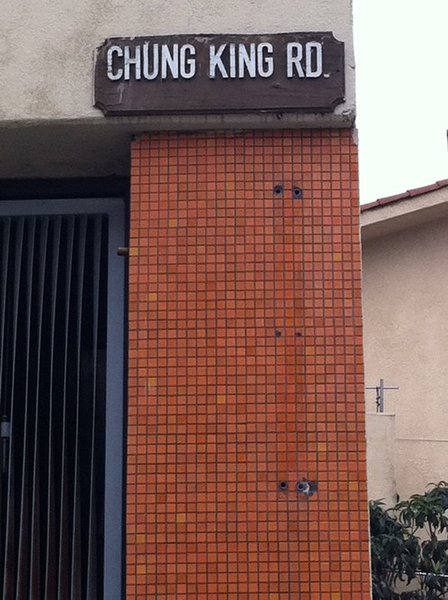 KW: I listened to some of it last night on the Internet.

LF: Yeah, it’s pretty chaotic. That’s the other thing, trying to decide if it should be something that has a studio, a physical location. I think for other projects we’ve done that are similar to this—Solomon was working with the Public School and I was working for the past year on this project called The Elysian Park Museum of Art—they’re just these different things where we have to negotiate if the physical location is a necessary part of what we’re doing, or if it’s something that can float around and go to different spaces at different times and whether a headquarters is a good idea. Right now it’s kind of homeless and squatting at the Public School space on Chung King Road.

KW: Radio is interesting in that way. I don’t think people associate it with one place as much. With a strong enough transmitter, you can listen to it anywhere.

LF: I think it’s a little bit of an issue of scale. You do always have the sense, even the most powerful radio station is going to say, “broadcasting from Los Angeles”; it’s going to claim a territory that might be bigger than a space that you can negotiate on your own. I think partly what we’re doing also is addressing how that traditional style of radio has been changing into XM or Internet radio, where there is no place. It’s more of a fantasy where you drive across the country and can listen to the same station the whole time or for an Internet radio, that people are listening from all over the world. I mean, it’s a really nice fantasy, this pure connection, but I think in order for that fantasy to keep developing there has to be some opposite force to it that really focuses on breaking up those networks and having something much more localized. 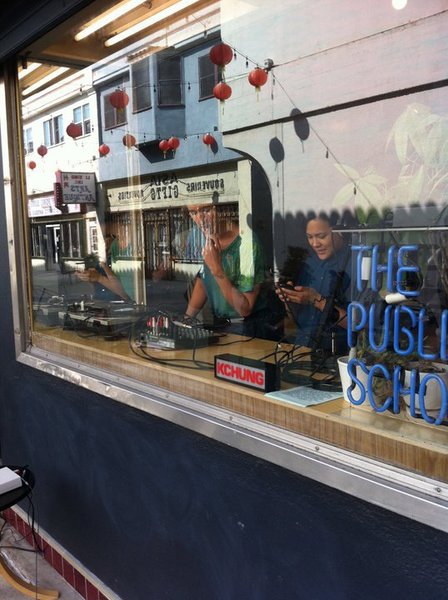 KW: It sounds like you’re wondering whether KCHUNG should be local to the point of broadcasting only to a precise location, or extending your reach a little further.

LF: Exactly. There’s also this element of technical mystery where a lot of times—for instance if you are listening to XM radio—there’s a lot of mystery in the sort of chain of delivery of the signal. It does have that ubiquitous effect of just always being present. And then, going back to an older technology of AM radio, it’s such a simple mechanism that makes it happen. There’s just the electricity and then you modulate the power of the electricity at certain frequencies and it makes the radio signal. At the events we’ve done, the transmitter is there for people to look at and ask questions about. There’s a little bit of a workshop feel to it, where we can show how AM radio works, which is totally obscured in something like satellite radio. It takes a little bit of digging to figure out what the mechanism is and even then, there are still a lot of missing links in the chain.

KW: Were you familiar with the technology beforehand? Has that been a challenging aspect?

LF: It’s been a challenging and fun aspect. It mostly just started from a curiosity and figuring out that we wanted to learn more about it and then deciding that the way we would learn more about it would be in a public way. We wanted to invite other people to participate in the learning about it instead of having a fully formed, deliverable service that we were just going to unveil. So from the beginning it’s been kind of a public experiment.

KW: What are some shows you’re planning? 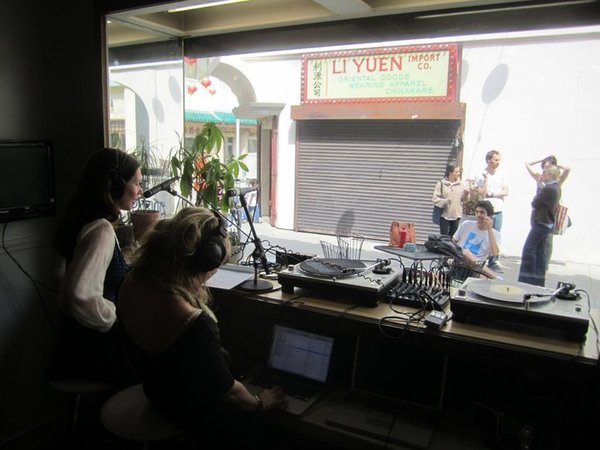 LF: Well, we have something called Love in the Afternoon, which is a call-in, romance advice show. We did that for the opening. And we have a guy in Toronto who’s doing a kind of Art Bell, late night ramble. He sends us one hour, pre-recorded shows; it’s syndicated. And we have a bunch of late night punk rock shows—a lot of punk people want to get involved.

KW: Ideally how often would you be broadcasting? Twenty-four hours a day?

LF: Yes, we’ve already committed to doing twenty-four hours a day broadcasting from the location on Chung King road. That’s been our initial mandate. And we also have a specific idea of format, so that’s been hard just to keep things in the format of a show that can be syndicated or something that’s live and exists only for that time and date.

KW: Are there any other formats you’re working with?

LF: We’ve been doing Public Service Announcements. For the opening we had Adam Overton doing experimental meditation PSAs, just reading something or eating food at one point, different meditations that interrupted regular programming. And, of course, station IDs. We’ve been exploring that ten or twenty second window of something that explains what you’re listening to as another venue. And we have traffic reports. And we want to do more news. There are some things that gear more towards actually delivering information and other things that are about interrupting the flow of information.

KW: What models did you have in mind?

LF: The territory of pirate radio is pretty rich: legalized, low power FM. As soon as you start mentioning that you want to do a low-powered radio station, all these people will come out of the woodwork and send you information. They’ll offer to come down and help you build a transmitter or pass on legal links. It’s a traditionally very radicalized, very organized and enthusiastic community. There’s a group in upstate New York called Free 103.9 that has definitely been a model for me. 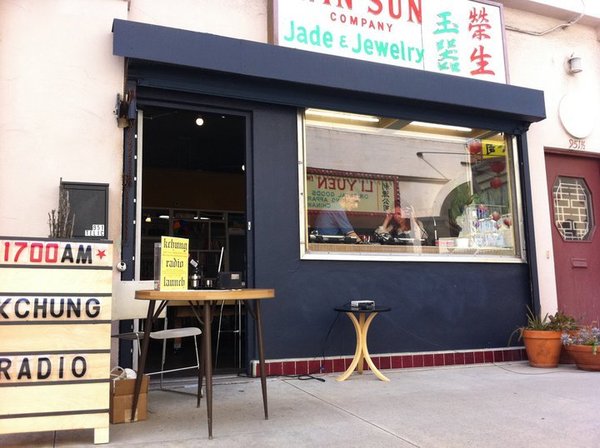 KW: Pirate radio actually reminds me of the Internet in a way but more unregulated.

LF: For me especially, my interest in AM radio comes out of a passionate interest in the Internet—in the way communities form and how their content is disseminated across the Internet. I’m looking for something that is the foundational opposite to that, something that you can just look at and see it working. But if you ask Harsh what his interest in the station is, it’s probably different and might be more compelled by a feeling that this type of programming is not on the radio in LA and that we need to make a station that can provide a platform for good Britpop, or whatever. His reasons might be more content driven and mine might be more of a naïve appreciation of the mechanisms at work. And I think as we get more people involved in it and there’s even more diversity and interest in what it should be, it’ll just get stronger.

ArtSlant would like to thank Luke Fischbeck for his assistance in making this interview possible.

Posted by Kate Wolf on 7/2/11
Tags: radio performance
ArtSlant has shutdown. The website is currently running in a view-only mode to allow archiving of the content.