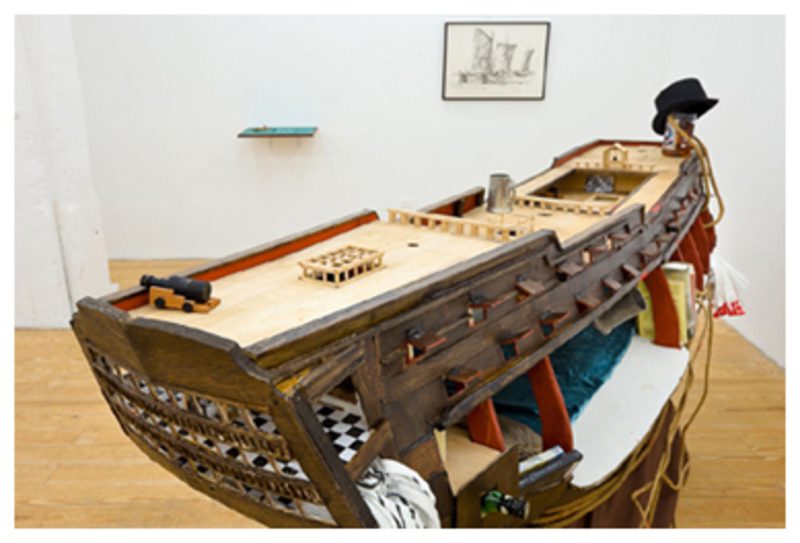 When Bob Dylan sang, “Everybody is building big ships and boats, some are building monuments and some are just jotting down notes,” he might as well have been singing about Jimbo Blachly and Lytle Shaw. These two—an artist and a poet, respectively—are the editors of the Chadwick Family papers. Who are the Chadwicks? Kin with an extensive collection of nautical artifacts, the core of which has been brought together for this very exhibition.

Furling the Spanker: Masterworks from the Chadwicks’ Nautical Collection is a first rate work of historical fiction. There are drawings, sculpture, mixed media, and a video piece; the tongue is pretty firmly in the cheek throughout. “Hand-tinted prints” from the “Chadwicks’ Illustrated History” are pages shorn from coloring books that have been colored to various degrees and given new captions. Many are hysterical. In one a sailor shimmies up a mast, his head swarmed with colorful, popping bubbles. The caption reads, “Hung over deckman taunted by circular afterimages.” Another of two sailors patching a colored sail reads, “Early color mash painting on sail.” It’s a smirk jerker.

There are a number of ink and watercolor sketches that depict a variety of seaworthy sailing vessels. The sketches don’t quite capture the light of a Turner painting though they do seem to channel an equally captivating emotional charge. There are two small dioramas that appear to be connected in a disastrous narrative. In one a ship pitches heavily into seriously choppy waves. In the other a lone, bare-chested figure lies on a raft made of ship detritus floating on calm waters. Special attention to bad fortune on the high seas carries over in the Shipwreck Memorials. These wall-mounted, low-relief sculptures, complete with brass plaques that give the ships’ names and circumstances for their sinking, depict the final moments before a given vessel is consumed by the sea. You just have to figure the captain went down too, though there are no stories about skippers or their mates.

The crown jewel of the exhibition is Man o’Bar, a model of the 100-gun flagship Victory on which Admiral Nelson was killed during the Battle of Trafalgar in 1805. The model also serves as a book repository for Patrick O’Brian’s maritime novels, as a bar, a one-man bunk, and a theatrical prop. The artists used the model in this final capacity to do a reenactment of Admiral Nelson’s death speech, delivered, oddly, with a bullhorn. It’s a silly thing to watch, a perversely amusing version of a seriously gruesome naval battle.

Part of every good historical spoof is a convincing back story. Every tale of successful art forgery is also the tale of a well-faked provenance, and that is true here too. According to the press release the discovery of the Man o’Bar model in the Victoria & Albert Museum in Mumbai was the impetus for this exhibition. Perhaps. It’s a good story anyway. Ultimately though it’s a reminder that some stories do not need to be true to be meaningful, and that history is as often a fabrication as most myths are grounded in reality. 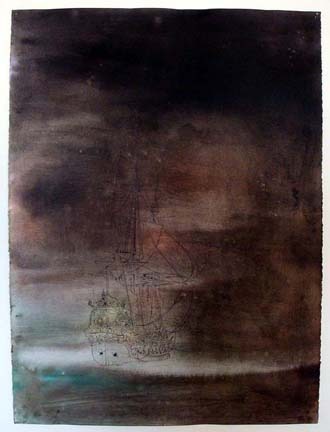