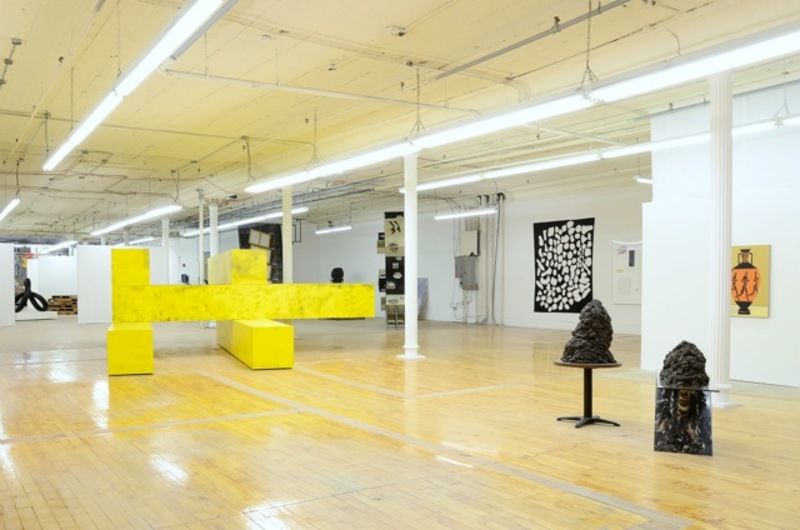 “The 2,800 miles between the West and East Coasts and the expenses of transportation—have combined to make California painting and sculpture less well known to the East and the Midwest than it deserves to be.” That’s a quote from the introduction to the catalogue Fifty California Artists, an exhibition put on by the San Francisco Museum of Art that toured the Whitney and the Walker in 1962-63, despite the time passed, it still (if distantly) reiterates the premise—to showcase Los Angeles art’s massive “but sometimes under-acknowledged contribution to the global stage”— of  “Greater LA,” an exhibition of fifty contemporary Los Angeles artists recently on view in a SoHo loft in New York.

After scores of international biennials and art fairs, commercial galleries with a dozen global locations from Hong Kong to Geneva (such as Gagosian) and of course a nether-realm of connectivity like the Internet, it would seem that a person making work in a specific locale would mean less these days than where it’s shown or how it’s thought about. So there’s something almost quaint about the idea of a large regionalist show, especially in the US. With a title that punned on MoMA/PS1’s quinquennial, “Greater New York,” the trio of “Greater LA” curators (dealer Joel Mesler, collector Eleanor Cayre, and New Museum curatorial associate Benjamin Godsill) asserted on their website that the works chosen were informed by “a selection of work as varied and idiosyncratic as the landscape from which it emerges,” a frame which sounds both inevitable and easily inclusive.

To this resident though, Los Angeles is a city like a loose thread; it’s (as ever posited) too fractured and too diverse, too sprawling and too segregated to think of with much cohesion. Maybe more than in New York, place is designated in Los Angeles by the people you know. Or as Allen Ginsberg put it so enthusiastically in his Footnote to Howl: “Who digs Los Angeles IS Los Angeles!”

So whether to read the work of “Greater LA” as a reflection of the influence of a city or the product of a particular scene aside (and how really to disentangle the two?), it was interesting to witness so many familiar artists together and try out a mental exercise of reflecting on their work specifically in terms in LA and as well as how it related to one another’s. 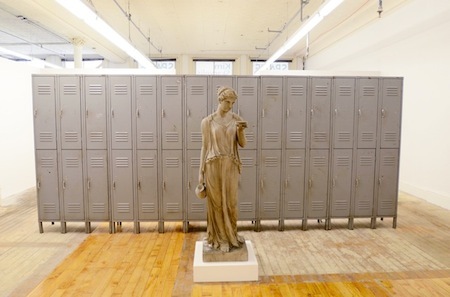 Detail of Alex Israel's installation Property, 2011, in "Greater LA." Image courtesy the curators and the artist.

Sometimes this was easy. In Alex Israel’s installation, Property, 2011, the artist rented a series of objects from a prop house for the duration of the show and displayed them, mostly on pedestals, as readymades. The lower half of a spinal chord skeleton, the remnants of a cast, a black and white cologne bottle turned backwards, a petite glass slipper, a massage table and a double row of lockers with a Greek-like statue in front, once isolated, took on a heavy, ambiguous symbolism—one that their status as props, meant to blend in and stand in for real objects, would easily rob them of. Yet even in watching the objects metaphorically pass from one sort of (non) functionality to another, I still couldn’t help but wonder about the role each might have played in a T.V show or commercial: the possible narrative that would have necessitated them. Ghost-like traces of Hollywood also figured into Drew Heitzler’s appropriated video for Sailors, Mermaids, Mystics. For Kustomizers, Grinders, Fender-men. for Fools, Addicts, Woodworkers and Hustlers.(Doubled), 2009. Using a three-channel projection, Heitzler simultaneously screened and overlapped sections of three 1960s cult films, mixing and reflecting the actors from one screen onto another. For all its possible subtext, the work seemed to speak formally to the nature of film itself (be it, through video), its essence of light and shadow.

Watching Skip Arnold’s, Head Shaking #2, 2009, I thought of earthquakes. The seamlessly cut 8mm video transfer, had a beautiful grain to it and Arnold’s violent facial distortions—cheeks slapping, nostril flaring, eyes rolling back into his head— against a sky blue background, were trance worthy. Olga Koumoundouros’s sculpture, Triumph Over Survival, 2010, served another weird vision of disaster, one that could be passed safely on a modernist throne—an Eames-like lounge chair elevated by Himalayan salt lamps. Melanie Schiff’s photographs of a deserted LA River concreted and tagged up with graffiti looked in turns both pastoral and pestilent.

For a place with a thriving performance scene, there wasn’t much of an emphasis put on actions or public art in “Greater LA” but Eve Fowler’s silkscreen posters, printed by Colby Posting Co.(instantly recognizable to anyone that drives and famous as a previous site for literary explorations by Allen Ruppersberg;  the posters often appear announcing concerts or boxing matches on freeway exits) of Gertrude Stein quotations read almost like remnants from a performance; I could easily imagine them affixed to telephone poles and off-ramp signs around the city. Dennis Hollingsworth’s paintings with their thick deposits of paint employed both a convex and concave shape, echoed in Mindy Shapero’s sculpture Vision of Inversion (Another Wonder), 2011, each calling to mind the idea of an inside turning out or vice versa, which seems relevant in a land of homes and cars, isolation and interiors.

Even someone like Amanda Ross-Ho, whose work I find singular and idiosyncratic, when put under the LA guise, I understood differently, perhaps relating more to the Southern California history of assemblage than I had thought before, though it could be a fleeting understanding. Here she showed a piece called Wet Paint, 2011, a framed white poster board affixed with different elliptical source material: a mesh shirt, swaths of canvas, a printed-out picture of her dad, a small, hand-drawn wet-paint sign.

I’m not sure if “Greater LA” will become a tradition and if the New Yorkers who need Los Angeles’s relevance proven to them would care either way but encouraging thoughtful outsiders in, isn’t a bad thing. Now perhaps LA should bring some version of current New York art to our stage to see what the view looks like from here.