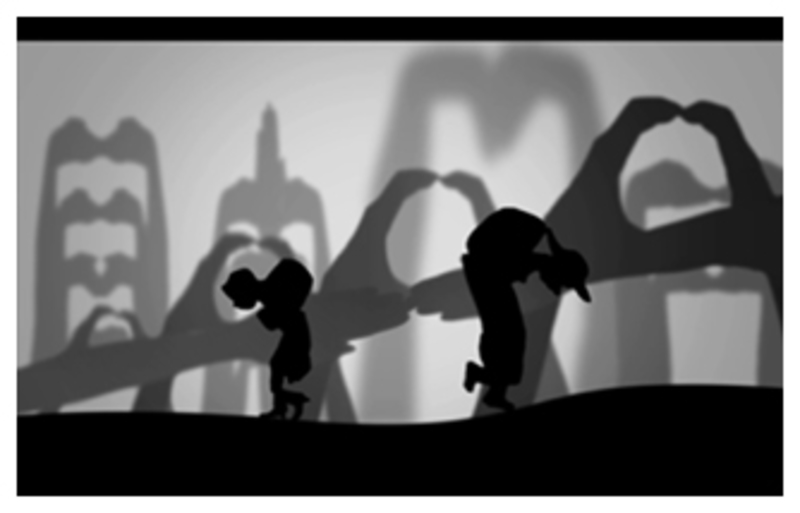 The Dark Side of Play

Beijing-based artist Cao Fei critiques notions of fantasy and reality in “Play Time,” her latest exhibition at Lombard-Freid Projects. Rather than focus on its child-like aspects, she seems much more interested in exploring play’s ambiguities. Her photographs, installations, and films are lighthearted on the surface, but never deny the darkness that lurks in the background. The ten-minute video Shadow Life relays three children’s stories that refer to a Chinese Spring Festival Gala that was once broadcast on state television. Each chapter (“A Rock,” “Dictator,” and “Transmigration”) expresses a cultural value through fantasy, philosophy, or politics, but children and adults alike were visibly delighted when they realized that every image was formed from hand shapes and gestures. Similarly, East Wind refers to Mao Zedong’s dogma that the east wind would prevail over the west wind, and his desire to shield China from Western influence at any cost. Dong Feng trucks carry trash from construction sites to a dump on the edge of the city, and Fei’s film captures the reactions of people who take notice of the process only because she has placed an image of Thomas the Tank on the front of one of the dump trucks as it makes its journey from site to site. The joy and surprise of the people who believe they have caught a glimpse of the popular icon is dampened when they realize it is not the real Thomas, but only a cheap imposter. 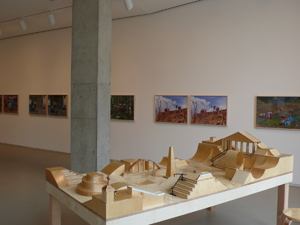 Like Fei’s earlier work that aims to critique the chaos and social instability accompanying China’s emergence as a world power, the diptychs that comprise the "PostGarden” Eye-Spy series try to capture the unstable existence of the country’s younger generation. In the series, Fei removes the characters from the BBC’s popular children’s show “In the Night Garden” from their loving, supportive community into one rife with lack and instability. While the BBC’s Garden characters may sing nursery rhymes and appear carefree, Fei’s characters express urgency and desperation. At first glance, the precariousness of their existence is not apparent, especially when Fei encourages viewers to try and find each variance in the diptychs. The plush and vibrantly colored costumes of Fei’s characters allow them to appear unassuming and friendly, but their poverty betrays them. In the 2011 work After a Long Day (Can You Spot the 6 Differences?), Fei shows them huddled under a bridge, roasting game over an impromptu fire surrounded by varying forms of detritus. The scene is unsettling and disturbing, making it difficult to think of play and childhood. Instead, Fei has forced us to confront the harsh realities of lack.

Not everything about “Play Time” is sinister and ominous, however. Fei builds upon the work of her virtual constructed utopia RMB City (2008-09), this time creating a scale-model fingerboard skate park that uses architecture from around the world as inspiration for the park’s structures rather than relying upon ancient and modern Chinese cultural forms alone. As children tested the fingerboards and explored the park, I have to admit that I was a bit jealous. At least for these young viewers, playtime had yet to lose its playfulness. 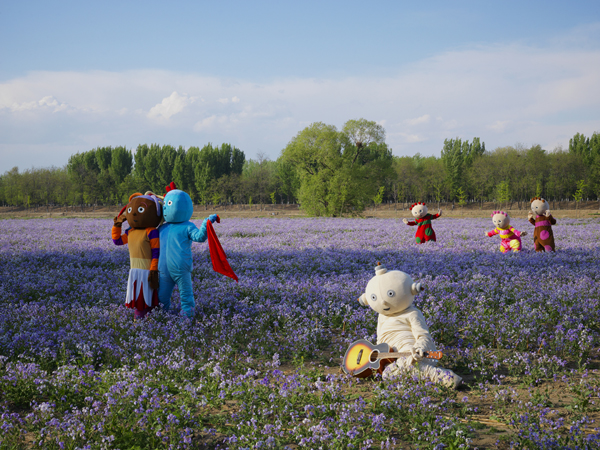