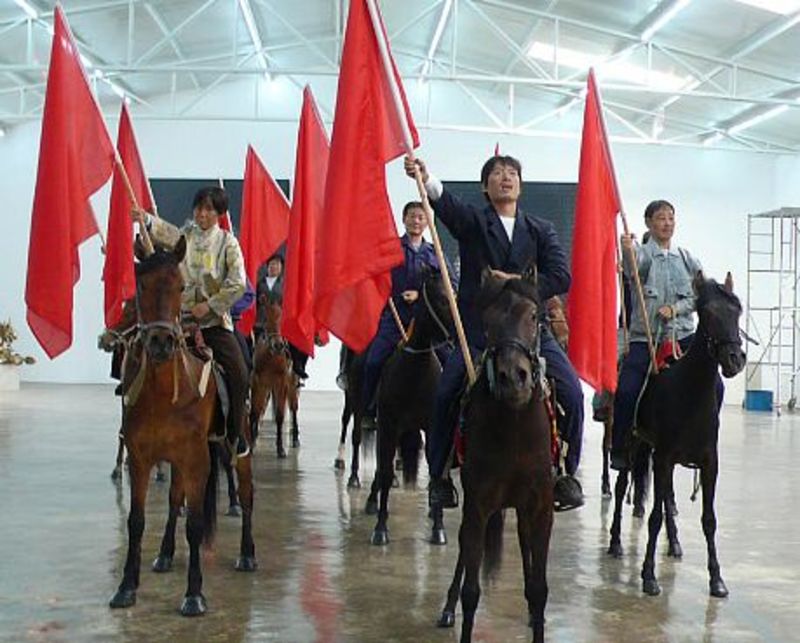 New York - ArtSlant editor Sophia Powers stepped into Eli Klein Fine Arts to speak with Zhang Dali about his recent solo show: “New Slogan.”  The artist had arrived with Klein moments before, having just returned from a meeting at MoMA where it was confirmed that Zhang will take part in an upcoming exhibition of six artists.  Bravo Zhang Dali! 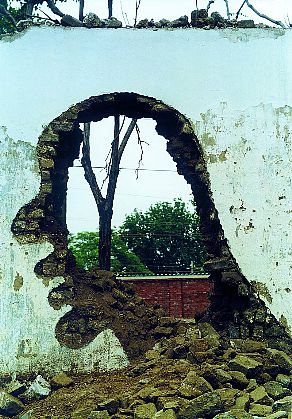 Sophia Powers:  I’d love to hear how you got the idea for this latest body of work.  Your practice has always dealt with the public sphere, but how did you become interested in slogans specifically?

Zhang Dali: I’ve been taking pictures of slogans that I come across in the street for years now, and I feel they tell a story about how propaganda has changed through time.  These slogans tell a very important sort of history.  I was very surprised when I realized that no one else was addressing slogans and how much they are affecting people.  When I was seven or eight years old I remember how all the slogans were patriotic and now all the slogans are about money and the economy.  It struck me that keeping a record of how the nature of slogans changed was a way to trace the changing zeitgeist of China.  It’s clear that no one cares very much about politics anymore, just money.  What a dramatic shift!  Who knows what it will be like in the future…

SP:  But you must pass so many slogans in the course of your day.  How do you decide which ones to take a picture of?

ZD:  Every slogan that I’ve taken a picture of is one that moved me as I walked past.  I think that this experiential aspect of moving through the world is extremely important.  Artists shouldn’t just stay in their studio—they should go out and meet people!  They should be always in conversation with people from as many walks of life as they can.  I feel like it’s important for me as an artist to remain connected to all sorts of people, and it’s not difficult.  After graduation I felt in the same boat as many of the migrant workers that I paint— I had come from a small city outside of Harbin, so I feel a real closeness of experience.

SP:  But you don’t only reproduce the slogans in your work—you reproduce them in a series of very realistically painted portraits.  Who are the people that you are painting?  Do you use photos for them as well?

ZD: Yes, I paint from photos I’ve taken of workers, but it’s not important to me who the individual people are.  I want them to be able to represent anyone.  My point is how slogans are not only political—they are also profoundly psychological.  They are a reality that is stored in the brain of every single Chinese person. 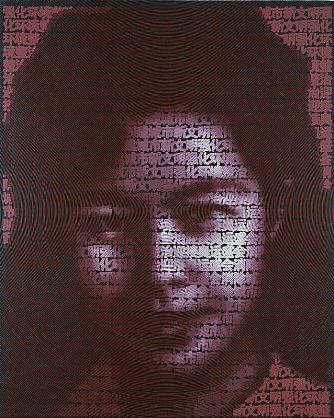 SP:  Are you worried about being able to show this work in China?

ZD: Well, I don’t see the work as critical in any way.  I’m not accusing the government of anything, I’m just reflecting what I see—a sort of transcript of reality, if you will.  The reality in people’s minds.

SP:  When you put it that way, perhaps the government would even be pleased that you see their propaganda as so effective!

SP:  Do you plan to continue expanding your work on slogans?

ZD:  Yes.  In fact, I am very interested in extending this project outside of China.  I’m interested in the slogans of other countries as well, and how they transcribe history.  I’ve had the fortune to travel to almost every country in Europe, and I think the presence of slogans in these cultural contexts is as interesting as in China.

SP: Do you know what new country you would like to begin working in?

SP:  What do you like to do when you’re not working?

ZD:  I love to write!  My first way of expressing myself was to write, and my first aspiration in life was to be a writer, believe it or not.  My second aspiration was to be an artist.  I think that’s why I have such a special interest in the written word.

SP:  Have you worked on writing for publication?

ZD:  I would love to publish something eventually, and actually I feel my writing is better than my painting!

SP:  What genre of writing do you do?

ZD:  Whatever comes into my mind I explore on paper.  I’ve been keeping a diary for many years now…I don’t know too many other artists who do that.  Perhaps when I’m dead someone will look at that.

ZD:  Well, I don’t think the idea of just being an artist is all that interesting.  What’s more important to me is being an intellectual and addressing society.  So many artists these days describe their so-called inspiration, but I don’t really believe in that.   Everything is a result of an intellectual process—it doesn’t just hit you!  Great art comes from using reason, not simply relying on emotion alone.

ArtSlant would like to thank Eli Klein and Zhang Dali for their assistance in making this interview possible.

Posted by Sophia Powers on 5/9/11
Tags: public-space conceptual, writing, slogan
ArtSlant has shutdown. The website is currently running in a view-only mode to allow archiving of the content.