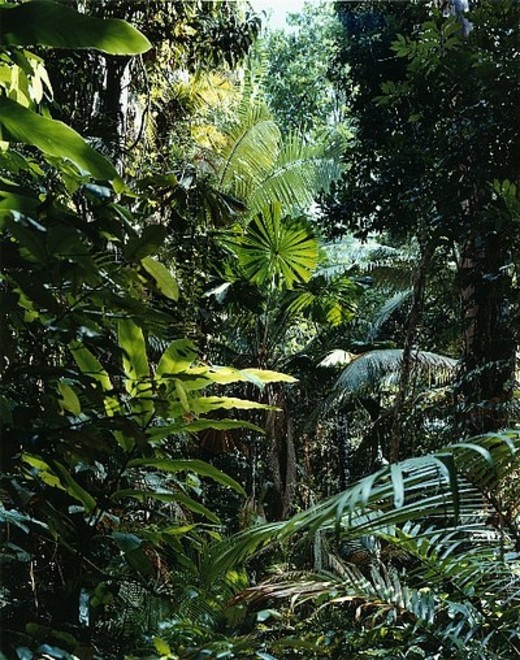 Thomas Struth at the K20

The best way to judge whether or not photography is any good is to see it in reproduction. At least this is my new theory after having seen the Thomas Struth retrospective at the Düsseldorf Kunstsammlung Nordrhein-Westfalen this afternoon.

This is seriously sophisticated photography that must be seen in the flesh. In a photograph I didn’t know, the hulls of two vessels out of water are shot from below, emphasizing their enormity, making them colossal and monstrous. There are no people to communicate their largesse (as is often the case with Struth's later photographs of technological eyesores) but the diminutive containers in the foreground create a perspective, however distorted. We know those containers and have seen them ride on the back of semi-trailers that, when next to them on the highway, make us as ants to elephants. 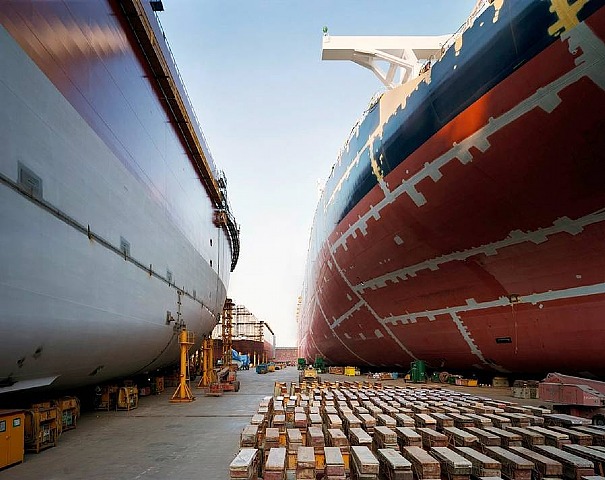 In the foreground of Dry Dock DSME Shipyard, Geoje Island (2007) the containers are diminished, waiting to be crushed by the boat on the right that looks as though it might tip over at any moment. Simultaneously, like mythological beings, the hulls of these two ships are tired, in need of repair, making them vulnerable on land, like the big white whale of Herman Mellville’s Moby-Dick, without the sea to give them their power. These beasts are all at once, threatening for their sheer enormity, and outmoded, arcane structures at rest. Nothing about their disproportion or their complexity is experienced from flipping the pages of a book.

And this can be said for so many of the images: nothing of the charm and legerity of the Samsung Apartments, Seoul (2005), of a world that is monochromatic and alienating beyond belief could be seen in a 4 x 6", even an 8 x 10" reproduction. The green gauze construction material is shot by Struth to be mistaken as wings, giving the impression that the buildings under construction might take off. Again, the size, the contrast of the green with the grey of the buildings, in the dead Korean air, bring the photograph alive. 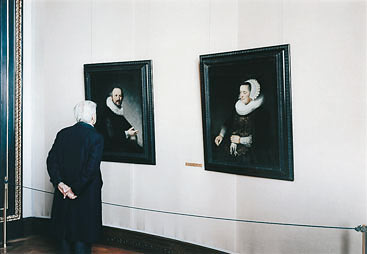 Another image I have always enjoyed, but never appreciated until I saw it in its 56 x 72" on a museum wall is the Kunsthistorisches Musem 3, Vienna (1989). I have seen this image of a gentleman looking at Rembrandt’s Portrait of a Man (1632) and Portrait of a Woman, (1632) again and again, and thought, oh yes, another of those photographs in which we are looking at a man looking, audience to him as audience, and thus, we are are reminded of our remove from the great art works we experience. This is surely the same oft-recited refrain of the contemporary cultural malaise. But no. In person, a whole world opens up into which I am drawn to participate in a relay of looks in which everyone (including me) is looking and not looking at the same time. Throughout his career, whether he is photographing 6th Avenue in New York, Notre Dame Cathedral, the Daintree Forest in Australia or Gerhard Richter’s family, Struth captures his subject from an angle otherwise assumed impossible. And again in Kunsthistorisches Musuem 3, the angle is such that we are placed to stand next to the man in the photograph, before the woman in the painting. In this foursome, Rembrandt’s man looks at us, while we are placed to look at the woman. In turn, the woman looks at the man in Struth’s photograph, while he looks at Rembrandt’s man. And so no look is ever returned. Rather, everyone looks past or at right angles to the opportunity for connection. On yet another level, even as we are drawn into the Kunsthistorisches Museum, to the point where we edge the photographed man out of our way, we are not looking at the painting, but Struth’s reproduction. And no one, not us, not the photographed man, nor Rembrandt’s man or woman, even think to look at the enormous painting that is, nevertheless, so huge that it spills over into the left hand side of Struth’s frame.

Thus, in an extension of the isolation of Struth’s Asian cities in particular, worlds without people, without personality, worlds in which humans no longer matter, isolation is returned to the experience of looking at art. In a place (the museum) where we are invited to immerse in a mystery that promises glimpses of all that is hidden, a mystery which shows us depths we cannot refute, the opportunity passes us by. Instead, we, like them in the photograph, err on the side of separation, singleness and looks without purpose. 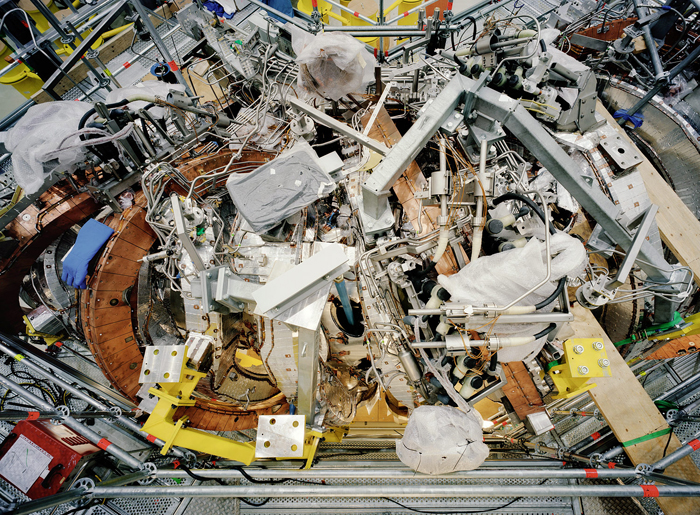 I have not always been kind to Struth’s photographs and though I see how transformative they are in their series, with the other works, filling the walls of Düsseldorf’s K20, I also think as a photographer, Struth is becoming ever more brilliant with each new series. Certainly, the complexity, intensity and impossibilities of his photographs – even as they were hinted at in the early urbanscapes of the 1980s -- become increasingly dense and the subject matter simultaneously more abstract, more stylized. I have never thought of photography as being able to reach anything like virtuosity. This is somehow reserved for the quiet persistence and perfection of painting and musical composition. Photography has always been too attached to representation and to the object itself. But here, in Struth’s latest work, I believe he shows us the photographic image can be used to find such grace. However – and this is what makes Struth brilliant — it’s not a grace of the Romantic or the sacred kind, for by the time he gets to the space stations of Cape Canaveral and the nuclear fission reactors in Germany, there is very little to revere in the image. These frightening representations of the mess of science and technology are very uncomfortable. Not only do they show us the detritus that is supposed to be technological research at its most vanguard, but they are constructed, through framing, angle and focal length to put us in the middle of the chaos. We fall, and are given no way out of a world without beginning and end, without orientation, without any reference to place, spatial dimensions and location. This, together with the stasis that pervades Struth’s work from the very beginning of his career, is technology’s guarantee that we are trapped, indefinitely. 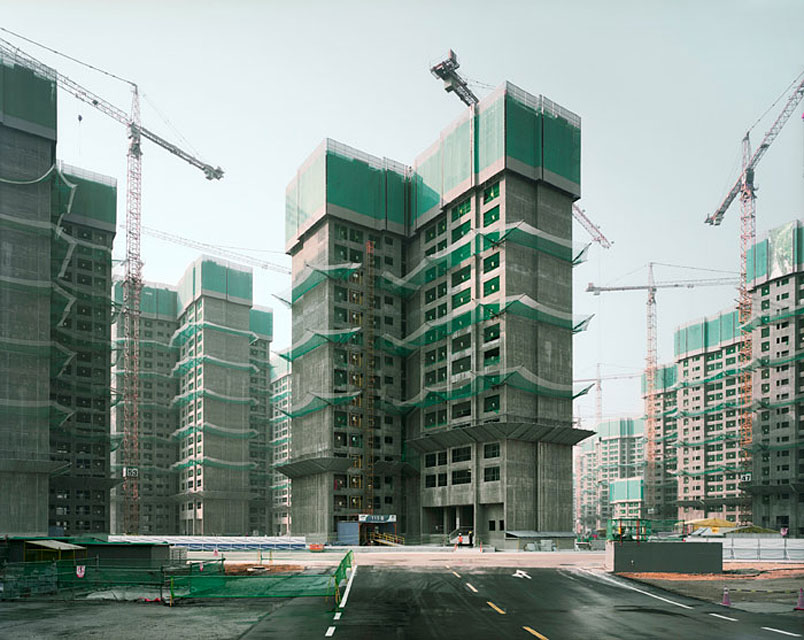 This major retrospective is, of course, traveling, having already been in Zürich, and on its way to London and Porto. I don’t know how the work was exhibited in Zürich, but I can’t image how it will fit into the closer space of the Whitechapel in London. In Düsseldorf, the open and upwards expanse of the K20, filled with light, with a silence and emptiness that one tends to only find in museums in Germany, is the perfect home for these photographs. Not only because it is Struth’s home territory and so much of the work speaks to an artistic and cultural tradition that was born and nurtured in Düsseldorf, but because the enormity of the K20 space enables an experience of the photographs that is in keeping with the one they imagine. Inside the K20, the challenge of Struth’s often massive photographs takes place in a world as apparently separated from reality as are those words created by the photographs.

Lionel Cruet Answers 5 Questions
11/6/18
COMMENTS (2)
containers
Thank you for your comment, and you are correct, they are not containers, they are the blocks put in place to keep the ship from falling over. As you say, they are not the size of containers, more the size of cars. I discovered this from another reader after the publication of the article.
Comment by: Frances Guerin on Monday 06/27/11 at 9:38 PM
Containers
Thank you, Frances, for allowing me to "see" through your eyes. Yet where you see containers dwarfed by monolithic ships, I see two average ships in dry dock, resting on their keels. And where you see containers, I see the possible remains of scaffolding, which was possibly used to repair the sides of the vessels. Still, maybe like many artists, Thomas Struth encourages all of us to see what we will, be it in his art, or in the scudding clouds.
Comment by: charliemunn&msn.com on Sunday 06/26/11 at 1:12 PM
ArtSlant has shutdown. The website is currently running in a view-only mode to allow archiving of the content.