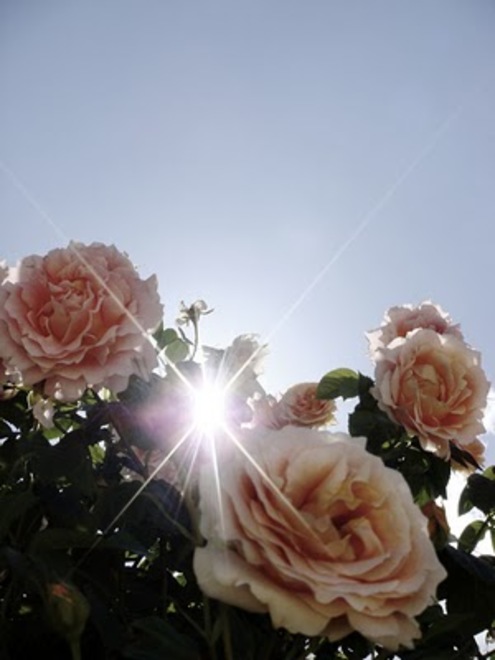 It sounds so perfect, and I think this might be the one month that the myth of perfection in Paris actually comes true. Unlike New York where Spring can come very slowly and reluctantly, in Paris, Spring has a habit of arriving on time. As the mild European sun beams down on this already visually stunning city, the buildings, the avenues, even the Seine, simply glow in Springtime. The flowers are out in the Jardin du Luxembourg; Parisians take up their seats on the sun-drenched café terraces; and life outdoors begins.

Spring is the season when everything Parisian moves outdoors. Paris is a very public city, a world designed to look outwards, onto the streets. We need look no further than the way the chairs in the cafés are organized — they look out at the world, primed for Parisians to pursue their favorite activity: watching each other as they parade in the sun. And Spring is the moment when all these rituals begin again; the pétanque sets are taken out of the cupboard; the Vélib subscriptions are renewed; the nights begin to grow longer and the days lazier.
And in Spring, the tourists filter at first, and before you know it, they are flowing back into Paris at full force. I noticed this morning that the line to climb up the tower of Notre Dame already extends the length of the north side of the cathedral down to the Pont Saint-Louis. I am always tempted to stop and tell the Italians, Americans, the English and all those French people from out of town, it’s not really worth waiting for. Surely they need to know that the best of Paris’ sites are seen at street level, not from high in the sky. But maybe the view of the tourist is actually better than mine, even if I do have the luxury of seeing this gorgeous city from all its different perspectives on a daily basis. Like most places and people who are pleasing to the eye, if you see Paris up close, its attraction becomes compromised by unsavory blemishes. From on high, there’s no seeing Muslim women being arrested for wearing a veil, or more bombs being dropped on Libya as a way to boost presidential favor. And so I leave the tourists to enjoy their perspective, on high, removed, a view of the city aglow with the joy of Spring. 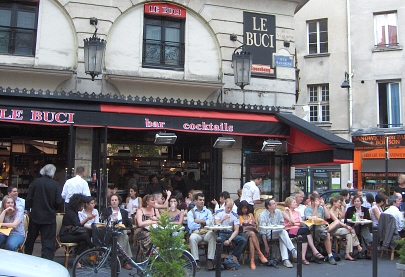 (Image: Cafe Le Buci, Paris. Courtesy Frances Guerin)
That said, I can’t resist sharing just one thing those of us who don’t belong find difficult about Paris in Springtime. As is so often the case in Paris, it’s one of those things that is both its seduction and a difficulty to be negotiated. On the terraces of every café in town, the Parisians no longer huddle under the heat for the length of time it takes to smoke a cigarette. Like us, as I say, they sit for hours on the terrace, enjoying the sun. Thus, like so many of the joys of Paris, sharing the terraces with the Parisians comes at a cost: coffee and drinks comes with the complimentary cloud of second-hand smoke. For as long as we sit, the men and women fill the air with smoke, sucking in the pleasures of tobacco as they discuss business as well as their social lives on their cell phones. Still, sitting next to the smoking Parisians for an hour or so beats standing in line at Notre Dame surrounded by tourists – at least the discomfort can be justified as being a part of the fantasy.
--Frances Guerin, film historian and writer living in Paris
(Top image: Jardin des Plantes, Paris. Photo: Maria Aragon)
Posted by Frances Guerin on 4/25/11
Tags: spring, Paris
RELATED ARTICLES

Paris Tear Sheets: Of Hummus and Other Stories
7/25/15

Paris Tear Sheets: Footnotes on Encounters
7/21/15
COMMENTS (0)
ArtSlant has shutdown. The website is currently running in a view-only mode to allow archiving of the content.