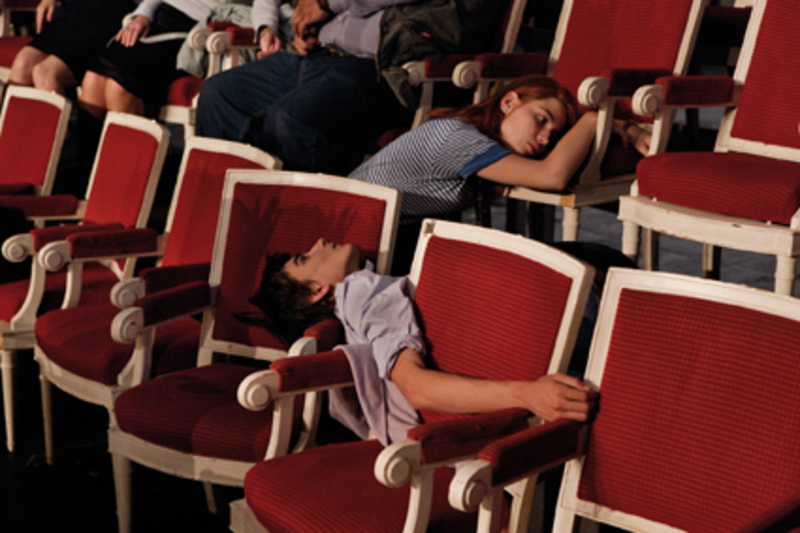 Without beginning or end

Despite only eight video installations, Communitas is a huge exhibition that could take hours, maybe even days, to go through. This is primarily because there is no telling where the beginning and end of the video loop of each work might be. We can sit and watch for extended periods of time and never see the same scene twice. In fact, in only one of the installations did I recognize something I had already seen. The absence of beginning and ending, the unknown locations, the movement through scenes that constitute something closer to a series of vignettes or situations in motion than a narrative unfolding, the blurring of the line between documentary and fictional representation, all of these attributes have the opposite effect of what might be expected. Their experimental form that results in an absence of familiar structures is what makes Aernout Mik’s installations compelling, entertaining, seductive.

Even if the exhibition is long, or the pieces are long, I found it best to sit with two or three of them that were easily more engaging than the others. Perhaps the most profound was Raw Footage, 2006, an installation that is terrifying, then funny, with moments of quaintness leading to ennui as we watch people going about their daily lives in an unnamed war zone. We are never quite sure if we are watching actors re-performing the documentary reality, or if Mik has edited together, for example, a series of animals at war: shots of goats wandering through town, cows idling past burnt out cars, or pigs oblivious to the trauma of their environment. 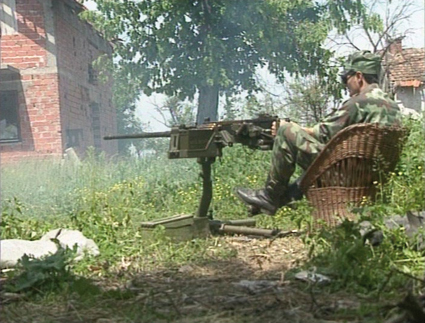 The accompanying text says that the footage belongs to “Reuters & ITN Source agency” that, despite the absence of date and location, represents the “disintegrating Yugoslavia in the 1990s.” I can’t be sure that this footage was not shot by Mik himself as it looks too far removed from the excitement and energy of warfare to be of interest to a press camera. The two-screen projection shows the moments in between; soldiers eating together, smoking a cigarette, kids playing soldiers, innocently, while in the juxtaposed image, bombed out buildings and roads ripped apart by warfare are the everyday stuff in the background of someone running to catch the bus. Thus, while the images are moments of everyday life in the war zone, they are “life unawares.” What makes them disturbing and profound, is not the image itself, but the image in juxtaposition. For the juxtaposed video will often shows the effect, or even the nonchalance side by side with the results of deadly acts that are, nevertheless, all in a day’s work. 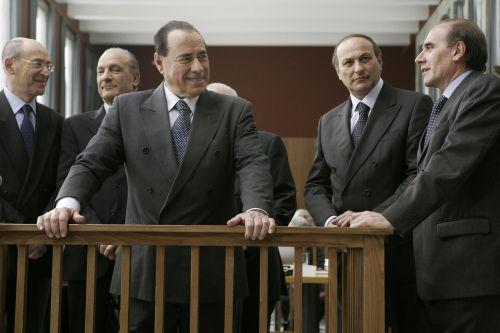 Another of the really strong installations is Shifting Sitting, 2011, a scene in the courtroom, again, unidentified, but kind of obvious where it is. After a few minutes we are once again confounded by the image – is it the real Silvio Berlusconi or is it an actor? What is so engaging about this particular three -screen installation is the way that it critiques the formalities and codes of the courtroom through irony, all the time confirming their existence and importance through the juxtaposition of the various groups present. Apparently, the images refer to Berlusconi’s legal entanglements. Each set of people in the courtroom has his own specific function, and a space that is designated as his. Each has a uniform, a role to play on what could easily pass as the stage of the courtroom: the actors are the judge, the security, the jurors, the prosecution, the witnesses, and of course, the public in the gallery. And as each group crosses over from its designated space and mode of performance to the others, it becomes unsettling. What is also unsettling about this video is that it is silent, which accentuates their performance. We also see the activities of the court from different perspectives — closeups, different camera positions, but there are also images that are back projected, on different screens – this is something Mik does in a number of his videos, showing us the performance of film in its attempt to create logic. And at the same time I think it shows how film has this capacity to break all of these expectations? Or perhaps it is a representation of the performance of film in an attempt to frustrate our attempts to create the logic? Again, it is the compete uncertainty dominating every aspect of an installation such as Shifting Sitting that makes it both fascinating and disturbing as well as a searing critique of its subject matter. 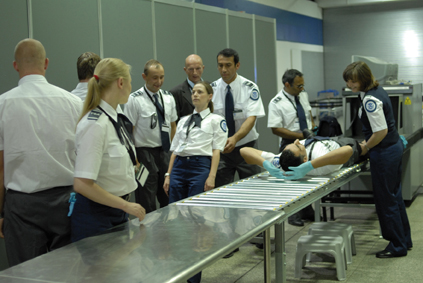 While Raw Footage and Shifting Sitting were the best of the installations, others made me laugh, and identify. For example, Touch, Rise and Fall, 2008, in which Mik examines the tedious existence of the security guards in an airport made me see the unpleasant and invasive experience of going through security in a whole new light. It had never occurred to me that the job of a security guard might be onerous: indeed, they probably don’t want to be doing their job any more than I want to be going through the security checks. Again, Mike shows the moments in between, we see these people at repose, caught in the tedium of their job. In Touch, Rise and Fall and Middlemen, 2001, shot in, or perhaps it is a recreation of, the stock exchange floor, Mik slows down the image. And so we not only see those moments that usually make their way onto the cutting room floor, but we see them in close up, in an attenuated form, thus emphasizing their boredom. We also see our own boredom. In one section of Touch, Rise and Fall, we walk down the corridor to the gift shop where buying is done for the sake of spending money. We get to see the garbage on sale for a high price in the duty free store, the children’s funny toys, the useless knick knacks. I was brought face to face with the mindlessness of being in an airport, and that all too familiar temptation to shop for the sake of something to do, the frustration and demoralization of the excessive security checks.

In Mik’s videos, we recognize a whole other world unraveling, in the cracks between, squeezing through the crevices in the system that binds us to each other and simultaneously ensures we are enemies. Whether it be on the battlefield, in the law court, or in the airport, the horrors or inanities of daily life bring an alienation that is nurtured by the systems and institutions that underwrite us, and that as Mik demonstrates, simultaneously, undermine our existence.