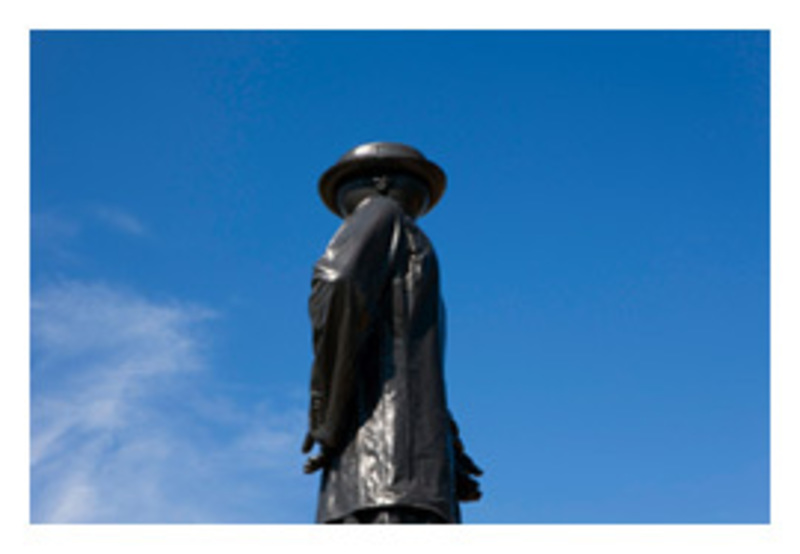 
The 2008 Emerging Artist Fellowship Exhibition at Socrates Sculpture Park consists of a very coherent, seemingly curated, group art exhibition. Upon arriving to the grounds I immediately spotted a sculpture arranged from garbage and painted white, and then another work of a small room enclosed by Plexiglas.  This installation included a plant and a nature painting, as well as an artwork consisting of a big store's electronic doors

with motion sensors and "Grand Opening" flags. It seemed that this exhibit has captured the contemporary zeitgeist of contamination and containment, referencing humanity's disconnect to the earth to be cheeky in the green sculpture park. As public art, the work was both surreal and critical of contemporary life.

The work I enjoyed most in the show was clever and possessed a dreamlike quality. When laughter trips at the threshold of the divine, the automatic door piece by Kim Beck and Osman Khan, was hilarious to run through, pausing for the doors to open for you. Beckoned by the waving colorful flags, little children thought it was outrageous fun as they ran around the work in circles commanding the doors open as they crossed through. If Wishes Were Horses, Beggars Would Ride, Jason Bailer Losh's giant trophy topped by a Pontiac Trans Am and Cenotaph, a faceless (from two sides) statue byAdriana Farmiga, were both very sarcastic anti-statues. If Wishes… seems to immortalize car culture while also marking its finality. Cenotaph references the Tomb of the Unknown Soldier while scoffing the usual corroborated suspects.

To You, Little Bigger than a Sweet Summer Pink Peach, is a towering twisting sculpture of pastel colored weaved wood. Jong Il Ma's title made me think the artist just had a baby, and the wistful work reminded me of Coney Island – with its volatile wood construction, I wondered how the structure will hold up for 6 months. Much of the work in this exhibition succeeds for playfully poking fun and being aesthetically unique. It will be interesting to see the works through the seasons, especially covered in snow and frost. (It is great to have this work while we still have seasons.)

Posted by Alison Levy on 9/21/08
RELATED ARTICLES
COMMENTS (0)
ArtSlant has shutdown. The website is currently running in a view-only mode to allow archiving of the content.