ONE NIGHT ONLY - DEPENDENT FAIR

Mutiny in the art fair world continues with the new fair “The Dependent,” a one evening DIY-happening presented on two floors of the Four Points Sheraton Hotel in Chelsea. Beyond the title  (a play on the trendy “The Independent” fair launched last year), all that was made public about the fair was its handsomely designed list of exhibitors. The mystique drew a big crowd--a testament to the coolness factor of the event. The exhibitors consisted of 16 select artist run galleries, alternative spaces, and artist collectives including the likes of Canada, Cleopatra’s, KS Art, Ramiken Crucible, and Recess, names that provide a certain guarantee that this fair is worth checking out, and those exhibitors you don’t know, you should probably get to know. The Dependent was spearheaded by artist Rose

Marcus, and was much more a creative experiment than a commercial endeavor. Apparently exhibitors had about two hours to set up their rooms, and the circumstances were volatile enough that the floors were changed at the very last minute.  Hotel fairs are awkward, and The Dependent was no exception. However the fleeting nature of it made it interesting--one minute it was a hotel, the next it was a fair, the next morning, it would be a hotel again. This “happening” quality gave it a freedom to be casual, to make no promises.

Navigating between the packs of people and the furniture, it was challenging to take time with or find out much about a lot of the work. The exhibits that fully incorporated the environment of the room were the most successful at breaking this barrier. Recess used their room to stage AK Burns and Katherine Hubbard’s Brown Bear, a performance first played out in a two-month public residency at Recess’s Soho space. Here, the artists were stationed behind the closed door of the hotel room bathroom where they gave volunteers hair treatments (mostly haircuts this evening, but during the residency ran the gamut from armpit hair extensions to very “elaborate” hair removal). A live feed played on the room’s television and guests could watch the performance while sitting on sheets specially designed by Hubbard (which matched the hair-cutting cape donned by the subject.)

Cleopatra’s presented a rainbow of sensory input. Psychedelic Afro-chic curtains and theatrically costumed women (all designed by Christiane Hultquist) beckoned visitors from the hall into a room with a bedspread by Polly Apfelbaum that with its stunning and bold color juxtapositions was nothing less than electrifying. The closet was held an installation by Alex da Corte- it was teeming with a universe of flowers that were immediately associated with the wafting sweet smell of perfume that seeped out into the hallway- which was actually coming from a perfume oil installation by Anicka Yi. 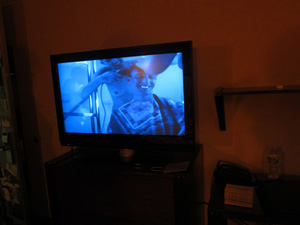 Although it was hard to squeeze into CANADA’s room, the people in there were definitely having fun. In addition to a gigantic fake nose and glasses sitting on the first welcoming bed, the room’s participants were completely entranced in a jam sampling session inspired by “Kaleidoloops,” colorful battery operated experimental sound recording/playing/mixing/feedback devices that were designed by Chris Kucinski and Owen Osborn with the collective Dearraindrop.

Some other rooms that stood out were those of 2-Up, Evil Freaks, Reference, and Soloway. Soloway, a gallery that opened in Williamsburg less than a year ago, made its room a hot spot with its lively and generous presentation of work from a group of fresh, and boldly off-beat artists like Jessie Stead, Annette Wehrhahn, and Branden Koch. 2-UP, a collaborative poster publishing project that consists of a collective of 16 artists and writers, created site specific objects for the event, a favorite was Joe Winters’ eclectic collection of light bulbs that were rotated in and out of use in the room’s light sockets throughout the evening. Evil Freaks, organized by Dependent’s leader Rose Marcus was intentionally understated, consisting of works that cleverly blended with the aesthetic of the actual room. Reference Gallery devoted their room to self-generated novelty merchandise all specifically branded with the artist Reid Ramirez, a hard-working artist who may not be well known yet, but after this fair...

Unlike the other fairs, it seemed like the majority of the audience came out of the artists’ community. They were there out of interest, curiosity, to make an appearance, and to support their peers. I heard numerous times the statement “this is the only fair I am going to.” The spirit of The Dependent felt less about the actual art and more about camaraderie and solidarity, along with an inevitable shade of insider-ness. 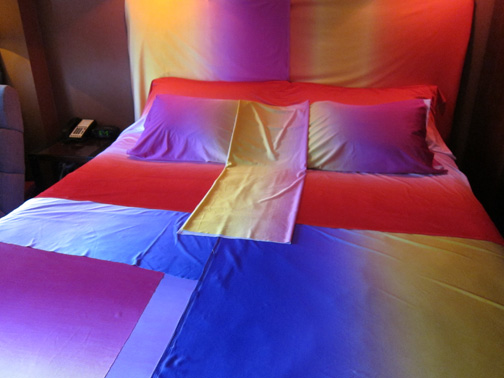