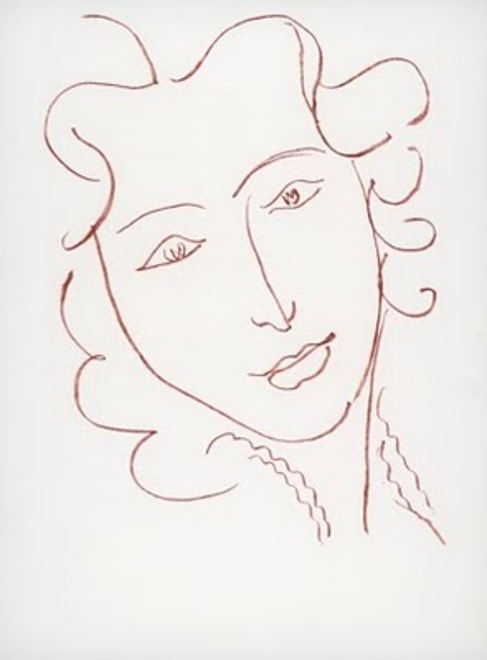 In “Matisse: A Celebration of French Poets and Poetry” the current exhibition at the Forest Lawn Museum in Glendale, Stéphane Mallarmé is quoted on one of the placards as believing that “only after death does the poet become one with poetry.” In his writing, Mallarmé  quested to invoke the otherworldly—quotidian trappings were anti-inspiration. What better place, then, to view Matisse’s exquisite etchings accompanying a 1932 Skira edition of Mallarme’s poems than at the cemetery?

It’s all the more intriguing to think of the poet who wrote about “l’absente de tous bouquets,” the perfect idea of a flower as opposed to the flower itself, after having just traversed row upon row of actual flowers (and a sign reminding would-be thieves they will be prosecuted for stealing bouquets off gravestones) meant to honor and conjure the departed—the idea of the person rather than the person themselves—before reaching the museum at the top of the hill.

The origins of “Matisse: A Celebration of French Poets and Poetry” seem fairly generic (where the show comes from is unclear but a book with the same material was published in 1997 by Contemporary and Modern Exhibitions, out of Laguna Niguel) and its layout is somewhat scattered, but who really cares? Forest Lawn is a spectacular setting and Matisse’s lithographs and etchings are an obvious crowd pleaser. With very spare lines, his illustrations of Mallarmé’s poems, including regal female figures with dead eyes, a swan, and of course, flowers, give some poetic justice to Mallarme’s desire to detach from the everyday into a transcendent, universal form. Also on display are Matisse’s lithographs for the book, Florilège des Amours de Ronsard, another Skira publication of love poems by 16th century poet Pierre de Ronsard, translated from the Old French to contemporary usage by Matisse himself.

—Kate Wolf
Posted by Kate Wolf on 2/28/11
RELATED ARTICLES
COMMENTS (0)
ArtSlant has shutdown. The website is currently running in a view-only mode to allow archiving of the content.