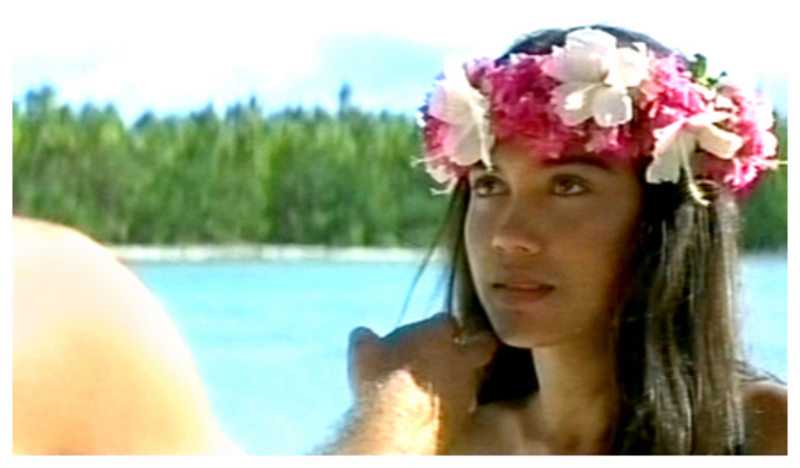 Tracey Moffatt’s new short film Other immediately beckons the viewer to grab some popcorn and take a seat as you enter the gallery. Its upbeat rhythmic soundtrack is reminiscent of Bollywood’s choreographed dance extravaganzas.  From Last of the Mohicans to The English Patient and Sex in the City, clips of numerous films and televisions shows narrate a quick lesson on the “evolution of colonialism.” The first fearful encounters of the “other” segue quickly to “difference-is-same” carnal lust and culminating with tectonic-orgasmic volcanic eruptions. Who has time for contemplating Orientalism? Rather, as Mr. T says, “Shirka the burqa” and “let’s get it on!”

In the rest of the gallery, a series of hand colored photographic diptychs tell the vague tale of a dark-skinned man who seems at once a menacing voyeur, stereotypical labor hand, and longing, unrequited lover. As with Moffatt’s past work, there are allusions to sexuality, personal and collective histories, and the representation of race and identity. Nothing is quite clear. Certain images in Plantation are reversed and re-paired with others (there’s that word again) to create new scenarios, in slightly different framing – oval versus rectangle, for instance. But the more they change the more they remain the same.  The rounded cropping of the images on handmade paper resembles Ecktacolor slides and 19th century photographic vignettes, and they emit the faded splendor of the former. There are silhouettes and sun-drenched fields, pretty smoke in the distance and the inviting white picket fence.

For the most part, Moffatt has chosen the photographic medium to resolve her issues and interests. Both have served one another well. Her film in Still and Moving maintains a kitsch levity in contrast to her more nuanced, “meaningful” work.  However, have they reached some kind of impasse in which both sides refuse resolution on an even more advanced level? Aesthetically, the artist continues mining imagery with depth and deploying it with a fine touch.

But after the volcano, what’s next?