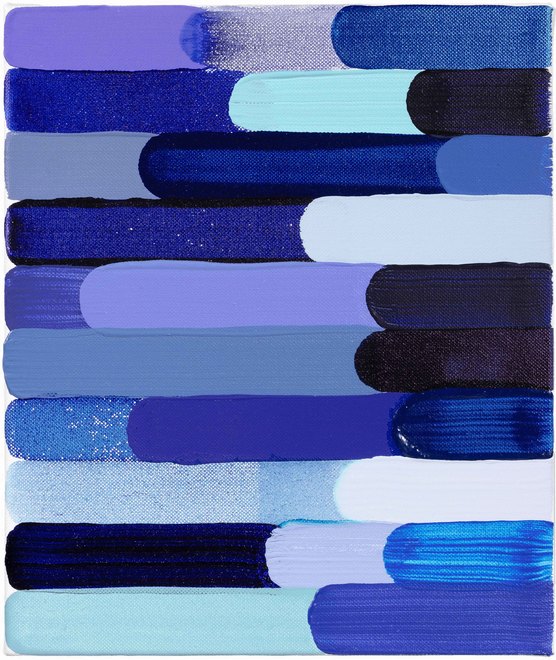 Since experiencing a solo show of his work at Southampton City Art Gallery in 2000, Martin Creed has continued to keep me on side; his modesty naturally prompting us all to give reassurance for his decisions, which were humble, witty and engaging. However, with Creed's return to London at Hauser & Wirth's new gallery space in Savile Row, my patience with his modesty is fraying, and the exhibition – somewhat appropriately divided into two spaces – reinforces this.

In one half of the exhibition sits Work 1092 with the subtitle Mothers (2011). Upon this huge piece, which consists of a twelve-and-a-half metre metal beam rotating in the centre of the room at various speeds, perches the word Mothers writ large in Neon Lights. As this giant word accelerates and decelerates, its sheer weight is hard to ignore as you walk under it. I had at least 6 inches of clearance but still felt trepidation as the beam gained speed and created more downforce. This is Creed seeming to grow more confident and self-assured of his decisions. Although he divided critics with his lights going on and off, Mothers is hard to find fault with, and serves as a fascinating repository for the viewers' projections.

The second half of the exhibition left me with an annoying taste in my mouth. Filled with a variety of works that includes photographs, a film, and paintings, I was reminded of Creed's difficulty with making decisions. However, at this point, I simply no longer care that decisions are difficult for him. As Mothers and many past works have shown, he can make decisions, and good ones. These paintings, if we can call them that, are naïve, but here they are displayed in a commercial gallery as if they carry cultural currency. Sadly for Mothers, these "paintings" carry value in his name only and little else. Of course, they will ask questions for some people, but only in regurgitated discussion circles projected out onto the public by Duchampian avatars on crutches.

Creed's approach is his wont, but this show highlights an issue for me in his work: his modesty is becoming intolerable. Moreover, this modesty appears ruthlessly undermined by the commercial setting of the gallery, and I am growing suspicious as to whether Creed's approach is all just an act.

All images courtesy the artist and Hauser and Wirth, London

Amber Renaye Answers 5 Questions
1/14/19
COMMENTS (2)
Hi Mark, Thank you for your comment. I am glad that you found my review fun to read. I must admit that I hadn't thought that the neon piece could be a play on others, but it will give me something else to think about it if I go see it again, As for the Duchampian avatars on crutches, I did mean to write "on", as I was referring to artists/critics who continue to drag up references to Duchamp. Looking back at it now, it was a shade too cynical, and I shall watch that in future. Thanks again! Gary
Comment by: Gary McLeod | Visual Artist on Tuesday 02/15/11 at 3:38 AM
Mothers by Gary Mc Loed
Hi Gary, I haven't visited this show but I was wondering did you mean Duchampian avatars on crutches, or Duchampian avatars and crutches? - not sure I understand the neon piece is it a play on the word others? Clearly the idea of your mum spinning over your head was a bit disturbing - only 6" clearance, probably helps explain it. Your review is great fun to read - thanks. Mark Stammers
Comment by: Mark Stammers on Monday 02/14/11 at 6:03 PM
ArtSlant has shutdown. The website is currently running in a view-only mode to allow archiving of the content.