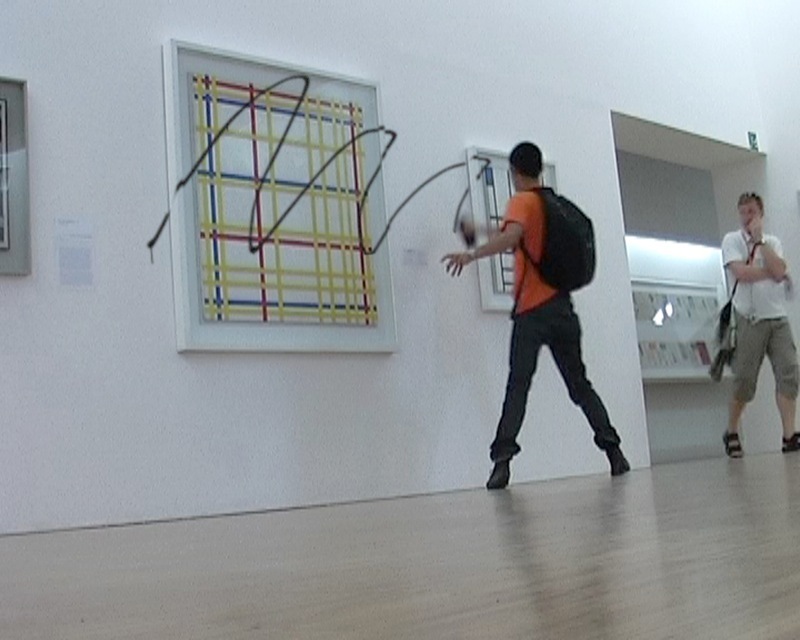 Graffiti imposes itself on everyday visuals: it dares you to look, and to look anew. It's had a long history, of course, as a means of self-expression. You can see examples of it from a couple of millennia ago on walls on buildings in Pompeii or on the catacombs of Rome, and doubtless these were not the first time someone took pen – or chisel – to a wall to say something funny or vulgar or desperate or accusatory or slanderous or even illuminating.

In "Caliente," a new show of his works at Galerie Emmanuel Perrotin in Paris, Bogotá-born Ivan Argote explores several acts of artistic vandalism that seek to spotlight what we often overlook.

At the entrance to the show is a 12-second video, "Retouch," from 2008, in which the artist sprays black squiggles onto two Mondrian paintings that are displayed behind glass at Centre Pompidou. He runs up, he takes out his can of spray paint, he swishes the works with a furious scribble, and he runs away like many a graffitist on the prowl at night in subways, tunnels or along deserted streets. Argote's scribble overlaid on the glass protecting the paintings cause you to notice (in the remaining seconds) the precision of Mondrian's design – as well as Argote's childish scrawl (graffiti is never self-effacing). Nevertheless, the temporary vandalism reveals the Mondrians in a new way.

In another video in the same room, Argote shows up before a Malevitch work, "Croix Noire," sets a boom box on the floor beneath the painting and commences to dance in place before it, self-involved and a bit ridiculous, like someone transposed from the hallucinatory sprawl of a nightclub dance floor to the manufactured serenity of a gallery. It's a Dadaist comment on the ludicrous reverence people feel in museums – in awe to ideas of greatness – that manages to be somewhat amusing and irritating at the same time: Hypnotic self-involvement can often involve a measure of disdain.

Several works titled "Scribble" are just that – but they explore what artists such as Frank Stella and others have investigated: the limits of the canvas. Often in these paintings, Argote's brush goes beyond the boundaries of the rectangular frame and into the space beside, suspended as if in air (actually carefully constructed "wings" in the shape of the scribbles).

Elsewhere here, Argote looks at what absence of a visual cue does to something familiar, in particular equestrian statues. He has taken photographs of such statues in front of the Louvre and in Place des Pyramides in Paris, or in Union Square and Central Park in New York, and removed the rider. So we see the horse, stationary or in frozen motion. The effect is a bit unsettling, and at the same time a bit ludicrous: these become monuments to horses (kitsch in the manner of taxidermy pets) and revelations of the folly of our tendency to use animals for our own self-aggrandizement. Such military figures that the statues commemorate would likely seem less powerful, less noble, were they merely standing – yet we ignore the steeds on which these representations are posed with such self-importance. When the human element is removed, the riderless horses have an uncomfortable emptiness: Is this what we're supposed to esteem?

Posted by ArtSlant Team on 2/7/11
RELATED ARTICLES
COMMENTS (0)
ArtSlant has shutdown. The website is currently running in a view-only mode to allow archiving of the content.