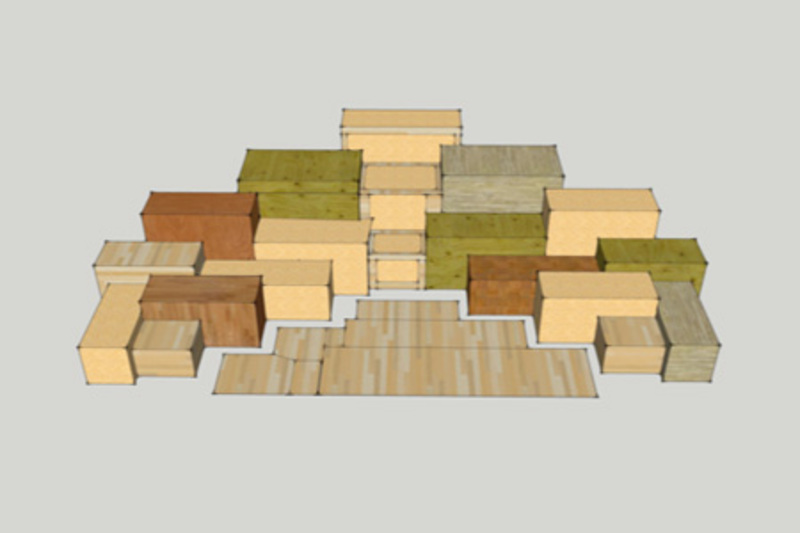 Art Los Angeles Contemporary seemed to put a welcome emphasis this year on organizing a variety of talks, readings and performances, mostly by way of asking local artists and artist-run spaces such as Human Resources (formerly in Chinatown) to suggest and organize events.

The artist Liz Glynn was responsible for a large swath of these, inviting musicians such as Anna Oxygen and Corey Fogel to perform mornings in the Barker Hanger’s makeshift amphitheater—it had a horde of crates set up as a stage and chance elements like the whir of airplanes passing overhead—as well artist Anna Mayer, who held a much anticipated reading of portions of the Surrealists' round-table sex research sessions.

I happened to walk into the fair Saturday at 2pm, just in time for Glenn Kaino and Derek DelGaudio performance as A. Bandit, organized by LAXART. It all took a second to process as a film crew followed the two around with DelGaudio grabbing up artwork off the walls and tossing canvasses from Seoul’s ONE AND J. gallery and Michael Decker’s pinecone sculptures from Steve Turner, on top of a crate that Kaino pushed, a boom box blasting the Wu Tang Clan’s, “C.R.E.A.M,” in the background. Security followed in tow, as did the fair’s attendees, winding around the puzzle of exhibition space until everyone reached LAXART’s booth where a two-pronged hook waited to lift the crate of art up to the ceiling. When it did—magic; it was empty, its wooden sides flapping like bird wings.

“My house will be called a house of art but you are turning it into a den of thieves,” Kaino shouted over a megaphone. Was this a reference to the fair itself, Kaino’s performance? I didn’t ask but of course when I later saw all the performance’s participants at the amphitheater’s bar, I couldn’t help asking the one question a magician, or artist for that matter, rarely answers. This time was no different.

A relatively small and LA-centric fair like Art Los Contemporary patches together a loose recreation of the city it takes place in, something that defies the truth of Los Angeles’s complicated mass and condenses it into a room, allowing collectors and other attendees to become aware of (and purchase from) spaces they would probably never go to. It’s for this reason I was happy to see Lincoln Height’s own Night Gallery being hosted by gallery and publisher Eighth Veil this past weekend.

Perhaps it was the painted black bollards by Joshua Callaghan, not exactly to scale but sculptures of objects so often seen (and felt, as anyone who’s spent time in the parking lot of Night Gallery during a crowded opening knows) that they seemed to have a shield of invisibility around them; or maybe it was the purple walls, the vase of fake white roses on the floor, artist Karen Adelman’s yearning, pitch perfect performance of the county song “Half as Much” on Saturday afternoon, that even in this simulacrum of a place, the distinctly strange atmosphere of the actual place managed to glimmer through, just a bit.

The purple walls were hung with paintings by Paul Heyer, an artist who also helps run Night Gallery and had a solo show there last December. Some of the work on display had sculptural elements such as a canvas of resin and fishing netting dotted with mussel shells, Truffle B.O., 2010: the resin almost resembling the kind of frosted yellow glass that one finds in old restaurants or their grandmother’s kitchen. There’s something about Heyer’s use of shells and netting that might hint at kitsch but it’s from the inside out, as if he’d burrowed a hole into the recognizable and morphed it, unrecognizably.

His other paintings have a similar control and eye for different tropes of modernism, often accenting a tight surface by placing precise figures against a more swirling background as in Moss, 2010, and Rare Air, 2009. They were certainly some of my favorite works on view and for whatever complaints I could have about the vapidity of art fairs, at least it’s a consolation that painting like this gets seen.

Lunch with X: A Conversation in Passing

X is a former gallery owner and artist in Los Angeles. We met sitting next to each other at the Forage booth. We both were having the Tahitian squash soup and beets with feta. X preferred to have his name withheld.

“People always put down the fairs; there’s good work and bad. Sometimes you see a booth and think, that’s a terrible gallery—that work sucks— but on a closer look, you can see something else going on. There’s really good work that looks bad and bad work that looks good and none of that is to be confused with good art that also looks good but that is what encourages the bad art.”

“I come to see what artists and dealers are up to, which local galleries are here. It’s not true what you say, that it’s mostly LA; there’s galleries from London, Dublin, Italy Berlin. I think the Ben Kauffman booth is very strong, he’s showing three German artists that are living in Los Angeles; I like Alexander Wolff. And I like Brenna Youngblood at Honor Fraser, maybe not the best thing she’s made, but it’s good.”

“You can see what are the new standards for quality for the work and what’s what. You know, you see what’s in the air.”

Posted by Kate Wolf on 2/1/11
RELATED ARTICLES
COMMENTS (0)
ArtSlant has shutdown. The website is currently running in a view-only mode to allow archiving of the content.