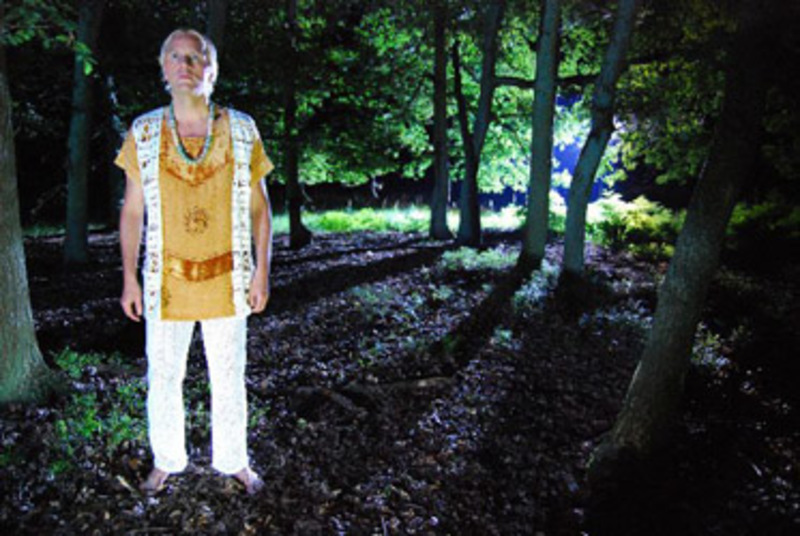 In keeping with the duality set up by its title, “A Strange Affinity to the Beautiful and the Dreadful” explores the antipodal forces of dark and light, death and life, good and evil that shape our imagination, and, the show suggests, our reality. Nimbly curated by Maureen Sullivan, the exhibition boasts an extensive roster of contemporary heavy-hitters – including Marilyn Manson, Ugo Rondinone, Sue De Beer, Alexa Garrity, and Artslant’s own Trong G. Nguyen – and posits as its framework the age-old conceit of the fairytale. Featuring sculpture, painting, video, audio installation and photography, “A Strange Affinity” acknowledges the contradictory relationship between fear and fantasy that is epitomized by that oral tradition: a story told to children, but intended to communicate macabre, adult life lessons.

While many of the artists have contributed works that reference specific stories from our collective consciousness, others investigate the various forces operative  in fairytales by utilizing techniques and motifs traditionally employed in their telling. Like an incantation, which achieves its desired goal through rhyme and repetition, Julia Chiang’s “Promised, Promises” (2009) is comprised of those two words written obsessively over and over again on a white sheet of paper in black ink. The work embodies a naïve trust in the power of “the promise” that is at once endearing and tinged with foreboding: we can only imagine that the writer’s faith will imminently be corrupted by a lifetime of disappointments.

Throughout the exhibition, the possibility for discovery and wonder is consistently colored by an equally potent potential for disaster: Manson’s portraits are images of passion, but also of suffering, steeped in blood and flesh. “The Man Who Eats His Fingers (Self Portrait)” (2006), for example, a delicate watercolor rendered in a tender palette of blues and rosy pinks, depicts a man contorted and deformed by self-mutilation. Ms. Chiang’s “Never Enough” (2009) is an installation of porcelain apples glazed in gold that alludes to a story we know and love: Snow White. Like a manifestation of temptation, the fruit is piled on the floor at the entrance to the gallery; the motif immediately recalls humankind’s history of descent into sin and the inevitability of our proverbial “fall from grace.” We cannot help but imagine Eve in the Garden of Eden or the fair, raven-haired damsel, too inclined to trust, who falls prey to a dissembling foe. We are familiar with the endings to these stories, but the apples remain endlessly appealing.

Loaded references to magic – that force which can be used for good but is often perverted and abused, used to oppress and to torture – abound. And death, realized or impending, is everywhere: Zomo’s “Pretty as a Princess” (2011), three blonde wigs hung in a row on the wall, offers a playful invitation for make-believe, a little girl’s dress-up dream, as well as an image of a beheading’s aftermath. “Til Death Do Us Part” (2008) occupies a stretch of floor approximately the size of a bed, or a grave, with an abundance of diamonds made from white porcelain, in varying sizes. The title evokes both the longing for a princely rescue via marriage – frequently the “happy ending” desired by storied damsels in distress – and the somewhat darker results of such a union: the termination of independence, tumult and conflict, the suppression enforced by compromise and the deadening of passion.

Downstairs, pending danger is given new meaning with a series of powerful installations. Broadcasted in the basement’s stark, metal hallway is “Nostalgia and Marlow,” a touching work by Damien Echols, who has been on death row since 1994.  The work comprises an audio recording of a morbid, tragic fairytale of isolation and loneliness that Echols wrote while in prison, and is, as such, the product of a seemingly interminable purgatory, its author awaiting a sentence that does not come and confined in the meantime to a prison of his thoughts. Bjorn Melhus’ 28-minute video “The Meadow” (2007) is an excellent, artfully executed horror film that never quite arrives at horror, keeping viewers eternally on edge. Again utilizing the tradition of repeated strains – in this case a series of images, shots, and sounds – Melhus eerily builds layers into the tension by sampling seemingly innocuous recordings from the Disney movie “Bambi” and incorporating them incongruously into the film at highly uncomfortable moments.

Taken together, the works assert the fluidity of the line between fantasy and reality and bring to the surface the fears, desires, betrayals and jealousies that we generally believe are consigned exclusively to the sub-conscious and the imagination. Our dreams and nightmares are present in our lives, they declare. Imagery of the forest abounds – that dark, verdant space in which sheer volume and compression defeat depth perception and all looks the same, tall trees extend into the black of the night and carry along incessantly in every direction. The world, “An Affinity” would have us believe, has much in common with that iconic site of terror and discovery; our paved, civilized roads and cities are in fact as mysterious and un-chartable as Hansel and Gretel’s infamous woods.