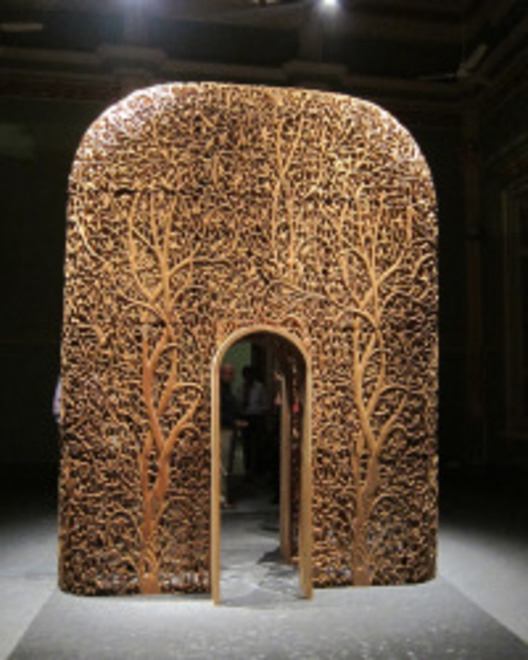 The India Art Summit ushers a flurry of activity into India’s capital, with exhibitions and collateral events galore filling Delhi’s days and nights.  Last year, I met this flurry with a calm approach to viewing the art as  I meandered through the expanse of Pragiti Maidan and attended a host of lectures and gallery openings.  In contrast this year I found myself caught in a stream of seemingly unending work. The reason for the difference is simple. This year I was curating a show.

In the middle of this hullabaloo, I received a refreshing email. It was from a high school student from my alma mater, who had contacted me at the behest of my old visual arts teacher. They had heard about my work, and as this young woman, Shireen, was undertaking a project on the role of the curator and museums, they decided I might be the right person with whom to talk. In her email, Shireen explained that her initial idea had been to construct a project that would allow her to imagine the future of museums in India, but as she began her research she quickly became frustrated by the serious lack of institutions in the country.

My immediate response was to applaud Shireen. I was applauding her on two counts. Firstly, because at the age of seventeen I was as unlikely to have known the meaning of the word “institution” as I was to grasp the nuances of its impact on identity and culture. Secondly, this question seems to be extremely topical, and is currently being examined in India in various guises.

Art critic Girish Shahane describes this void in a recent article, entitled “Whose NGMA Is Worse?” where he compares the National Galleries in Delhi and Mumbai. In Shahane’s estimation, while Delhi fairs better than Mumbai, the attitudes of those in charge are frankly disappointing.  Shireen’s questions had further import for me as I went to the Lalit Kala Academy to see Arshiya Lokhandwala’s show, entitled “Against All Odds: A Contemporary Response to the Historiography of Archiving, Collecting and Museums in India.” I was filled with real anticipation to see the exhibition, which honed in on a topic that was relatively radical for the hallowed walls of the public exhibition venue. Lokhandwala invited artists to respond to the lack of institutional structure in multiple registers of experience, drawing on social, personal and imagined solutions.

Upon entering the exhibition, I encountered Sudarshan Shetty’s large carved archway of wood, with a sword dangling menacingly in the middle, referencing the violence implicit in historic monuments and the act of preserving tradition. Bose Krishnamachari’s well-traveled "LaVA" (Laboratory of Visual Arts) offered viewers a chance to delve into the artist’s extensive collection of books and educational materials, a clue into the process of education that informs his works.

Pushpamala N’s installation considered the evolution of the notion of Mother India, and how ideas of femininity have been enveloped in those of nation-building. She placed a holy cow, wearing a mala of heads a’ la the goddess Kali, alongside the sari and khadi-clad representations of idealized Indian womanhood. NS Harsha’s playful intervention invited members of laughing societies worldwide to create objects and works to express themselves. By collecting a series of objects and quotations, he literally was able to create a mini-museum that explicated their activities.

Among the strongest works in the show was Tushar Joag’s subversive reimagining of Modernist images from Lalit Kala’s own collection. By placing hallowed works by Francis Newton Souza and other revered artists alongside his own matchbox interpretations of the works, Joag created a direct critique of the institution, while asking larger questions about the relationship of modernism to his own practice. Dayanita Singh’s work was moving in its personal inquiry into the nature of archival impulse. She combined potent images and narratives, and muses on the power of museums, observing that “the past is preserved within objects as souls are kept in their earthen bodies, and in that awareness I find a consoling beauty that binds me to life.”

(All images courtesy of Lalit Kala Academy and the aritsts.)