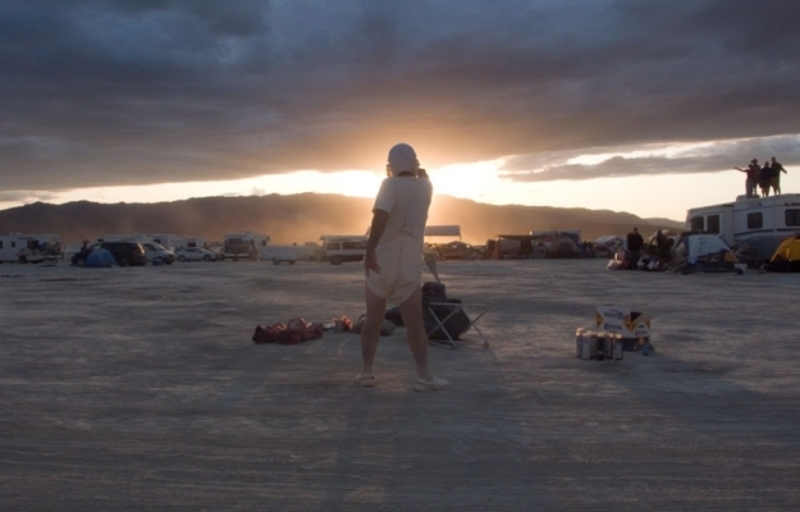 Los Angeles, Dec. 2010 - Emi Fontana is the Executive and Creative Director of West of Rome, a nonprofit arts organization launched in 2005 that functions without a permanent exhibition space. Instead, West of Rome uses the varied geography of Los Angeles as an ever-rotating location for its artists’ often site-specific work. Recent events include “Eternity Forever,” Marnie Weber’s performance and exhibition of a new film and collage at The Mountain View Cemetery and Mausoleum in Altadena, and Jennifer Bolande's “Plywood Curtains,” a series of site-specific sculptural installations designed to activate the windows of empty storefronts all over the greater Los Angeles area.

Marnie Weber, from Eternity Forever, 2010, Collage; Courtesy of the artists and West of Rome

Kate Wolf: I’d like to ask you about Marnie Weber’s show at the Altadena Cemetery—how did it come about? What were some of the challenges in staging an event in that space?

Emi Fontana: I’ve known Marnie’s work for a long time and I really like her practice. One day we were walking in Altadena together and we walked through the graveyard and she said how much she would love to do a show there because the cemetery’s mausoleum has an art gallery. Initially the idea was to show these collages she’s been making for many years about collecting images of graveyards from all over the world; we thought that would be the perfect location to show these pieces. But then we realized we had an opportunity to use such an amazing space and the project naturally expanded. From the first conversation we had it took a couple of years to develop the whole thing, and (this kind of thing I don’t always tell the artist sometimes until after the fact) but we didn’t have an actual contract with the people at the graveyard until just two weeks before the opening.  I mean, they work at a graveyard; they’re not in a hurry.

KW: So when you approached them, how did you explain what you wanted to do?

EF: First of all, I always try to understand what their availability is and I try to understand who I’m talking to because the reality for them might be very different. Initially, especially with the people from the cemetery, it was a very cautious approach on our side. We realized they didn’t know anything about contemporary art. You always have to deliver the idea in different ways to people, to translate in a language they can comprehend. Probably, the maximum in this direction is the Jennifer Bolande project in which we are talking with all these realtors and brokers about empty storefronts. That’s a world of it’s own. I think we’ll only be able to disclose all those adventures at the end of that project! It’s supposed to last though and it will last until July next year. We’re always looking for new locations. We hope we’ll reach about 50 locations total by the end of the project but it’s been difficult.

KW: Do you have to rent the storefronts?

EF: No, the idea is to get the space donated otherwise it would not be possible. We cannot rent an empty storefront in Beverly Hills, right? So far the Jennifer Bolande project has been the most difficult because the artwork somehow talks about the site. The project is about the crisis of retail in the real estate, not specifically just retail sales but the social phenomena happening all over the world that people are not going to stores anymore.

KW: Both Marnie Weber and Jennifer Bolande’s pieces fall under your Women in the City series, which is a great series and I think, a departure from a generally accepted cliché of public art being something big, sculptural and not necessarily associated with women.

EF: Yes, it’s also the idea of permanence and impermanence somehow. I often think of permanent public art as the most boring.

KW: You’ve been doing the series since 2008. How did it start for you?

EF: I always had a very strong interest in women artists. When I had my gallery in Italy, the first two years of programmation, I just showed women. Also there is a group of American women artists who particularly touched my attention when I was starting to work professionally in the art world in the end of the 1980’s. These women were Cindy Sherman, Barbara Krueger, Jenny Holzer and Louise Lawler. They were artists I admired and also they were the first women who really broke into the system in terms of the market. And certainly, Barbara Krueger and Jenny Holzer’s work had very much originated in the street and even if someone like Cindy Sherman’s hadn’t, it’s still in this very vernacular language that adapted well to my idea of public art. So when I decided to start this series, I really wanted to start it with these artists, bringing them back in a way, to a practice that was more similar to what they were doing in the beginning. 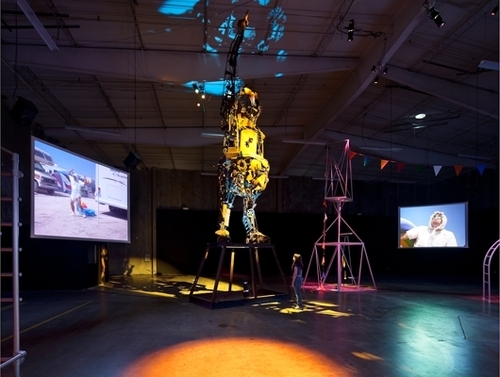 Jennifer Bolande, Plywood Curtains at 496/500 South Lake, Pasadena, CA (two stores adjacent to each other), 2010, Mixed Media; Courtesy of the artists and West of Rome

KW: Something else I notice with the projects you do is they tend to alternate between these incredible spectacles—like the Mike Kelley and Mike Smith show this past summer or even Marnie’s show—and then something way more subtle, like Jennifer Bolande’s project, something that might easily be missed. Do you make a conscious effort to produce both?

EF: I know I do that but I don’t know how conscious it is. I think it’s interesting that every project has a different nature. Something that interests me and is part of the mission of the organization is that public art is about inclusion, so for us it is important to create these moments where the community gets together and in both cases that you mention—for Mike Kelly and Mike Smith and also for Marnie—there were these moments at the opening that were really strong in terms of participation from the audience.  I know that a project like Jennifer’s has a completely different way of operating in the social realm and it interests me as well: the more subtle ways to penetrate. We are going to have an event for Jennifer, or some kind of discussion but it will be different because the project is really about its repetition.

KW: There’s also something exciting about the idea coming upon a piece of art that’s just waiting there for you without you expecting it, which makes me wonder how you approach the kind of disconnection in Los Angeles to public space. With everyone in their cars it seems hard to cultivate that type of space here.

EF: Yeah, I think there is a different idea of what public space is here. And in a way, Jennifer’s project is addressed to the driver. If you see it from the street when you’re driving it could look like real plywood, but if you look more carefully, if you walk, you would see it more immediately as what it is. But I think about drivers and I think about space, what public space is in Los Angeles. One of the next projects we’re working on is to try occupying some physical public space in downtown LA, in the street. But that’s what I think makes public art interesting in Los Angeles, it’s not a homogenous landscape and the urban nature of Los Angeles is so different and offers so many different situations that go from the freeway to small streets to parks—we had a project with Huntington Gardens in the past and we’re planning on doing another one. 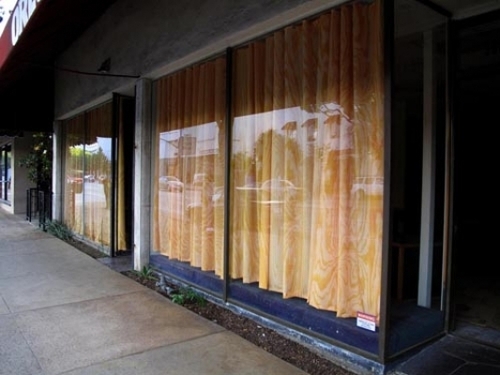 Mike Kelley and Michael Smith, A Voyage of Growth and Discovery (installation view at Farley Bldg., LA, CA), 2010; Photograph by Fredrik Nilsen; Courtesy of the artists and West of Rome

KW: Do you think there something in Los Angeles that serves as a touchstone or reference point for the people that live here, some type of unifying landmark?

EF: I really love the Music Center by Frank Gerry. I find it a very sexy building and I think it’s a good contemporary image of LA to me. And there are a lot of intersections. I also have this idea of doing a project with the alleys.  I can’t reveal too much about it (laughs) but that’s another really interesting thing that Los Angeles offers. There are so many different spaces here.

KW: And how do you find your spaces? I know you place an emphasis on finding the right space for the right project.

EF: I drive around and I look at the city. I think about artists’ practices in relation to the city. I think things out a lot though my way of thinking is not particularly analytic when I make decisions. It’s more organic. And I love the city, which is essential. I find a lot of inspiration in the city.

ArtSlant would like to thank Emi Fontana for her assistance in making this interview possible.

Posted by Kate Wolf on 12/28/10
Tags: sculpture, installation
ArtSlant has shutdown. The website is currently running in a view-only mode to allow archiving of the content.