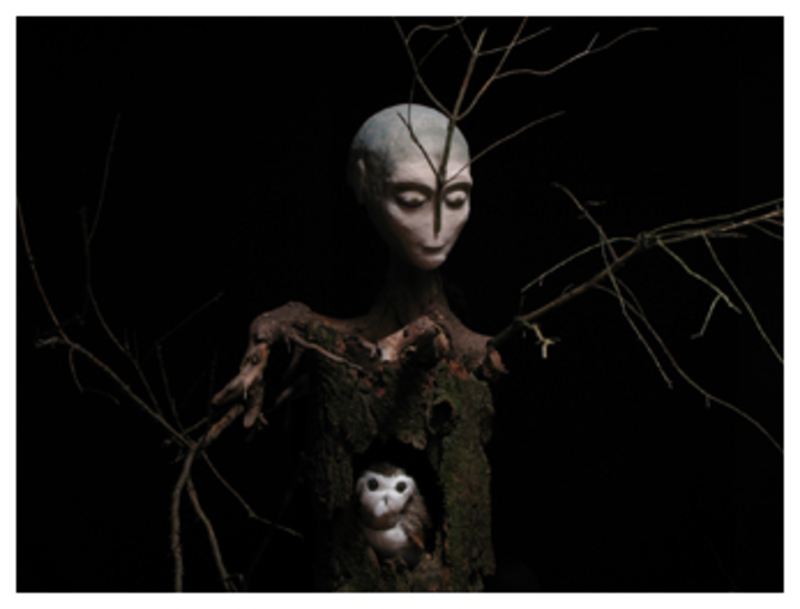 Through Dark Windows -- a Technicolor Vision

On the left wall of the gallery, two small screens are mounted as a diptych. Titled “Monument,” after Elizabeth Bishop’s poem, “The Monument,” the two channels play out as slow and repeating vignettes. Each depicts similar, white, house shaped structures that undergo impossible yet uninterrupted play against their landscapes, flowing between interior and exterior, distance and proximity.

Ahead is a larger screen—a bench invites a more involved commitment. In this video, “Seed,” inspired by Gogol’s “The Nose,” the pace of things within each scene is painstakingly slow, ushering on a meditative state. The accompanying sound acts as white noise, a very intense, internal silence. As with his other two videos available upon request (Moth, and The Blue Hand), a cryptic narrative is mimed by masked-and costumed characters.

As perspective shifts between interior psychologically charged spaces and exterior model-built facades, the compelling visual components belie the artist’s background as a painter. Each frame is considered as a canvas, and the scenes cumulate as slow moving paintings, assembled with vibrating tension. From the dramatic lighting, to the ambient integrations of color, to the distilled stances of the characters, to the clever handmade props and sets, every part of the composition, in every single frame, has been vigilantly considered – a sensitivity shared with such contemporary filmmakers David Lynch or Michel Gondry. Looking back to early film, Ehrenberg credits and very much emulates strong influences of German expressionist filmmakers: Melies, for his illusion of magic through in-camera effects; and the expressive, theatrically stylized sets of F.W. Murnau (Faust) and Fritz Lang (Metropolis and M).

Deeply impressed by passages in literature and film, Ehrenberg pays wholesome respect to his sources of inspiration. Along with direct references to text by Elizabeth Bishop, Nicolai Gogol, and Italo Calvino, he attributes much of his invented logic to the surreal, morally ambiguous tales of Japanese folklore. There is a sincere and innocent quality to Ehrenberg’s craft that suggests the artist is pursuing something inspired from a childhood vision.

The bizarre cityscapes in “Seed”, and in “Moth,” come from Italo Calvino’s description in Invisible Cities of architectural layouts that are constructed out of dreamlike logic. Taken from Elizabeth Bishop’s “Moth-Man,” “Moth” translates the vivid strangeness of Bishop’s poetry into a constructed, pantomimed, moving image. The narrative alternates between scenarios where different (or the same) “Man-Moths” attempt to make sense of their disorienting and shifting urban surroundings.

“Seed” alternates between two environments that are strangely changing as the light shifts, moving back and forth from exterior to interior. Two stories merge when, after finding his own nose in his food bowl, a “man” pays a visit to a witch-doctor who replaces his nose with a twig. The man returns to his wife and they somberly observe as he takes on the characteristics of a tree. The expressions on the masks don’t change, but the characters are charged with feeling-- in the slow gesture, in the stance of the body and direction of the head, in the close-up camera shots that pan from one face to another.

Although literary sources provide the seed for Ehrenberg’s creation, these influences have become internalized and intertwined with something very personal. In addition to making everything by hand, Ehrenberg literally inserts himself into the work, behind the masks, acting as protagonist. The results are not illustrations or interpretations but rather truly idiosyncratic expressions.