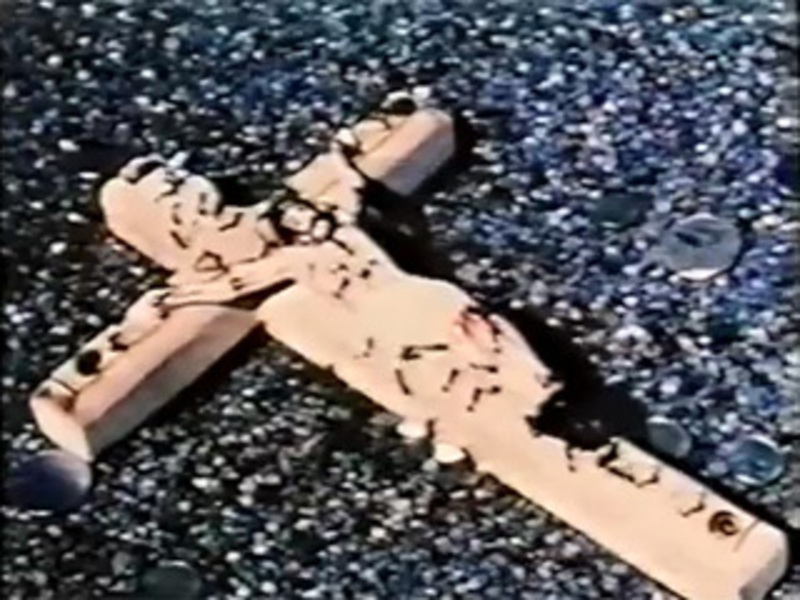 Seen and Not Seen

I saw David Wojnarowicz’s Fire in My Belly, 1987, the day before it was pulled from the exhibition "Hide/Seek" at the National Portrait Gallery in Washington, D.C. The exhibit itself has been touted by the gallery as “The first major museum exhibition to focus on sexual difference in the making of American portraiture.” Because of pressure from the Catholic League, and complaints from Virginia Rep. Eric Cantor (amongst others who haven’t actually seen the exhibition), the show has been censored. We’ll get to that.

The show moves: it is a history of gay and lesbian representation and as such it shows constant variation. At the risk of abandoning my post-modern roots, I’ll say that the grounding of this show in history is effective—these works show a text of sexual difference, but like all texts (as opposed to works) it shows a dilation; a deferment of meaning.

I walked through "Hide/Seek" backwards. I entered at the wrong end and decided why not? Just being a young homo trying to examine my history practically forces it. The show’s arc begins with a section titled “Before Difference” and ends with a room showing “New Beginnings.” Between them are “Modernism,” “the 1930s and After,” “Stonewall and After,” “Consensus and Conflict,” and “AIDS.”

Since I started in the backroom, I immediately confronted Andy Warhol. From the shocked spiky hair to the silk-screened pink and red blobs making up the camouflage, his camouflage Self Portrait from 1986 refuses to hide.

In the "New Beginnings" room Jack Pierson’s “self portraits,” show a convoluted relationship with male beauty; they are photographs of other (incredibly handsome) young men in their underpants as stand-ins fo rthe artists. Cass Bird’s I Look Just Like My Daddy, 2003, takes a young girl as its subject, but from the trucker cap and tattoos, one could never know it.  Glenn Ligon’s 1993 series Runaways advertises the characteristics of a fugitive slave--Ligon himself.  All three pieces show a certain difficulty of representation in a world where codes of gender, class and race have been inducted into the world of performance.

In the very moving section devoted to the emotional and cultural weight of AIDS, Felix Gonzales-Torres’ Untitled (Portrait of Ross in L.A.), 1991, in a rainbow spill of candy into from a corner asks for to be gifted and sustained as its medium with each being slowly taken, dissolved in the mouth and then replenished. AA Bronson’s Felix, June 4, 1994 (printed 1999) is presented hugely, seven feet by fourteen feet, behind one of the gallery’s walls. It’s as if we’re stepping into the bedroom of the portrait’s subject, one of Bronson's dear friends, severely wasted and hours before his death.

At the hinge of the show, figuring themselves somewhat out of order, are Robert Mapplethorpe’s Brian Ridley & Lyle Heeter, 1979 and Robert Morris’ “infamous” advertisement of the muscular artist in leather S&M gear. They act for me as a gateway to the earlier works where codes of masculinity are bent right under the noses of the law and public. A good example of this is commercial artist Joseph Christian Leyendecker’s Men Reading, the original painting for an Arrow shirt ad that appeared in 1914. When read as a text, images like Leyendecker’s resonate because the queer signals arrive after the work itself.

The scandal at hand, however, is an example of refusing to wait. Wojnarowicz’s Fire in My Belly is a dies irae, a hymn for the dead, in its imagery and meter. Its images are succinct and beautiful; the offending body of Christ flickers during the video’s intense pacing which takes as one of its loci Christ’s unflinching mercy. It paints Wojnarowicz as a seer, intentional or not, a flood of sick irony is unleashed each time the sutures are pulled through Wojnarowicz’s mouth.

Top Image: Still from David Wojnarowicz, Fire in My Belly, 1987.

Posted by Ryan Funk on 12/6/10
RELATED ARTICLES
COMMENTS (0)
ArtSlant has shutdown. The website is currently running in a view-only mode to allow archiving of the content.