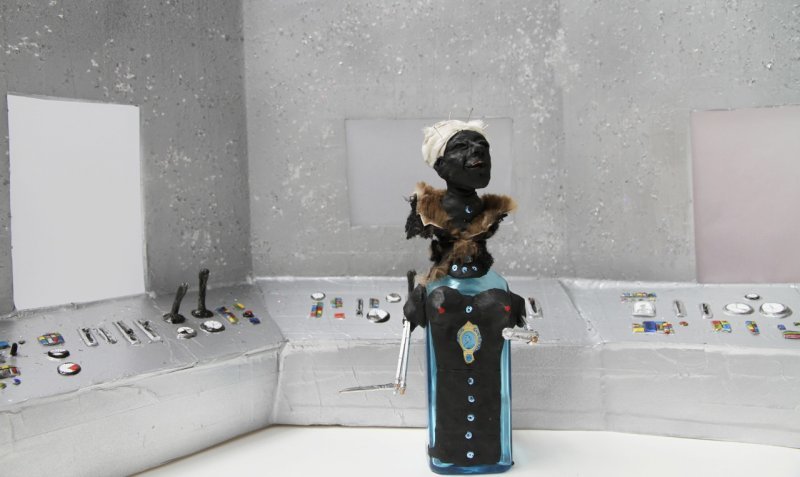 Despite its heavily researched investigation into the various branches of post-colonial thought and theory, there’s still actually a great amount of black humor, however uncomfortable, in the work of Candice Lin. At Lin’s current solo show at François Ghebaly Gallery, I entered the gallery to see a white ceramic sculpture of the bottom half of a female form sitting on a platform, The Moon, 2010. You must look directly into the genitalia to see the video playing inside, literally putting angle as central to viewing experience. With a squint of the eye pressed up against the vulva, I watched a short animation sequence: from behind a wood door, the famous splayed pubis of Gustave Courbet, alive with green eyes, is drawn over and reclaimed by another female form drawn by Lin. Headless, it floats into a different scene— ogreish men sit behind succulent trees and a woman’s head waits on a branch. The body grabs the head and a man grabs her, pushing himself inside. She then grabs his head and keeps his penis for her own after he falls away. She retains all three as she copulates with a wolf. The video’s last shot— a clip from the film Something’s Gotta Give—casts a strange echo to this scene as Marilyn Monroe, naked in a swimming pool, releases a wild and primal howl.

The Moon, which, according to the gallery’s press release makes reference to the plaster models and etchings of the murderous 18th century anatomist William Hunter, is a first course for the more ambitious and densely packed video, Holograms, 2010—the show’s centerpiece—but it still manages to present in condensed form many of the larger themes at play: myth, race, gender, science, violence. In Holograms especially, Lin braids in diverse sound clips and found footage, at times almost imperceptibly, and her drawing over and animation of Courbet’s L’Origine du Monde, 1866, is a metaphor for the aim of her authorship in using found material underneath or alongside new animation sequences, often constructed with the use of clay. When the specter of the original peeks through it feels completely intentional and when it is overtaken or dissolved into the larger context of Lin’s work you may notice it only in the form of a visual or audio footnote. They build up over time and the list of sources is long.

The video is set around the pillars of three main characters—a schizophrenic king, a magical machine and a holographic man and woman who reflect in a sci-fi chamber/time machine manned over a mechanized African woman. In other scenes, a clay alien is dissected and remade into a blonde bombshell; a computer screen reads: “People get on my nerves sometimes.” The amount of disparate material gave me the feeling that the video’s meaning has the power to grow exponentially upon successive viewings. Still, there is a visual poetry and rhythm present immediately.

And, again, despite the seriousness of the content, some humor too.

Posted by Kate Wolf on 11/23/10
RELATED ARTICLES
COMMENTS (0)
ArtSlant has shutdown. The website is currently running in a view-only mode to allow archiving of the content.