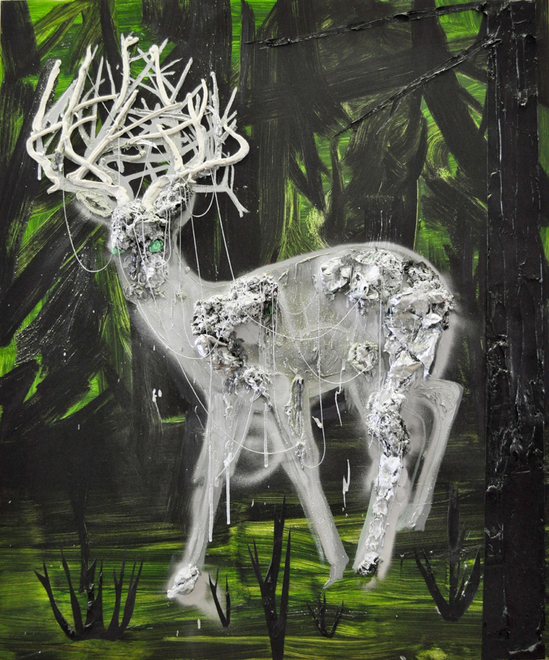 Shack in the Woods

It happens when they least expect it, and when we, watching, have come to expect it the most.  A group of teenagers enters a wilderness of some sort, far from supervision, and far from safety.  Amped on hormones, liquor and laughter they engage in licentious behavior; they separate, coupling.  That’s when the monster strikes—enraged by their behavior, he targets and kills each young person, one after the other, in successively horrifying ways.  Usually only one survives to tell the tale.

It’s a common fable that we’ve come to know as the modern horror film, warning of the dangers of the wilderness both physical and metaphysical.  It's this landscape, at turns inviting and terrifying, that Kim Dorland depicts in his new show at Mike Weiss gallery.  His paintings explore those liminal spaces of the wilderness, a place free of the constrictions of adult civilization.  But along with that freedom comes the ever-present possibility of a hockey-masked freak coming to slice your neck.  Jason is there, and so is Jack (Nicholson?), the familiar Boogeyman as well as the Canadian-native cryptic lake monster, the Ogopogo, all depicted, rather touchingly, in somewhat humanizing portraits.

Dorland’s enormous canvases, piled with and positively gushing with paint, explore the borderlands between civilization and wilderness.  Not deep wilderness, but wild areas easily reached by suburban teens seeking a refuge from the watchful eye of authority.  You know the spots—landmarks riddled with the evidence of late-night drinking sessions and adolescent graffiti, places invariably christened with names like “the Drinking Shack” or “Party Rock.”  The centerpiece of the show perhaps is Shack, an enormous mixed-media painting, bordering on sculpture, built out with screws and wooden slats to form an actual shack, marked with the warning “KEEP THE FUCK OUT!”

Signs of adolescent rebellion carved in trees, heavy metal and punk band names, sexual fascination and frustration expressed with rude, crude drawings.  It’s the kind of puerile pollution of the natural that Dorland engages with in pieces like Caribou Sculpture—a taxidermied caribou head marred with paint irreverently splattered over the animal’s eye and dripping from his antlers, antlers which have been tagged all over with juvenile graffiti like, “Easy Sleazy,” “TITS,” and “Got Beer?”  It’s a challenging piece.  It immediately reads as a defilement of majestic nature, but it’s somewhere between a critical and a celebratory stance, representing Dorland’s complex relationship with nature and expressing those pivotal moments of hormonal-driven exploration and discovery.