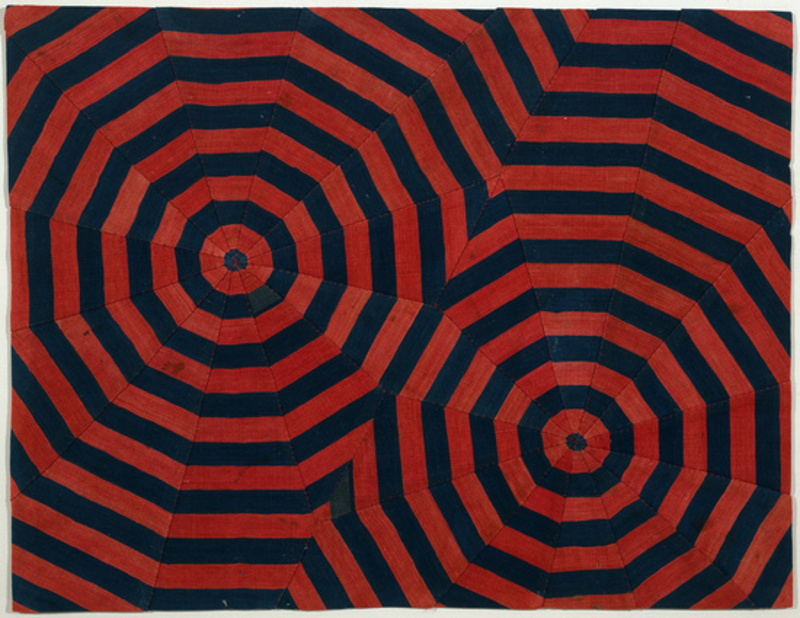 Fabric has an amazing ability to capture memories. When I was growing up, I had a duvet cover patterned with pastel clouds and scenes of fields, and I loved its peaceful colours and tranquil scenes. Two weeks ago my birthday boosted me painfully up into the 25 to 34 age bracket, and yet whenever I go home and find that, now faded, duvet on my old single bed, it reminds me of the cosy safety of childhood.

The emotive power of fabric is at the core of Louise Bourgeois’ oeuvre, just as it is at the heart of Saville Row, where Hauser & Wirth recently opened its new gallery space. Engaging with the history of the materials she used, Bourgeois – who passed away earlier this year after a 70-year career – arranged, sewed and platted different coloured fabrics into patterns and designs, mixing craftwork with the abstraction and conceptualism of contemporary art. Many of the pieces draw on the past life of the materials involved, so silk scarves are juxtaposed with bedspreads, bits of clothing and household linens. Bourgeois was influenced by her parents’s tapestry restoration business, and there is an inherently personal and domestic feel to these works, despite the title suggesting a more industrial set up.

The most beautiful and transcendental works on display are a series of abstract fabric arrangements in shades of turquoise which immediately relocate the viewer to a Caribbean beach, complete with coloured umbrellas and a perfect sea. These works are brilliant in their simplicity and they instantly make you smile. Like this series, the vast majority of Bourgeois’ works are labelled "Untitled," presumably to let the works speak for themselves. Despite the pieces being aesthetically appealing, it would perhaps have added to the experience had the works been attributed titles that shared the fabric’s history with the viewer. Nonetheless, the manner in which The Fabric Works has been curated organises the works by colour and technique, emphasising the themes within the artist’s work and allowing the viewer to trace Bourgeois' interests.

In contrast, there is a slightly odd discrepancy between the craftwork of the framed fabric works and the sculptures that accompany them. In the midst of Bourgeois’ investigations into the interplay of colour and texture, there hangs an enormous naked man, strung up by his stomach, his legs and torso hanging down in such a way that he is more reminiscent of a butcher’s shop window than a human being. He has the same look and feel as black tights stuffed with fabric, much like the cat’s tails of a homemade child's Halloween costume, which is consistent with the exhibition’s fabric theme. However, there is something inherently sinister about a hanging man, and something even stranger about a hanging man whose head is missing but whose genitals are prominent and at eye level. The work suggests an uncomfortable relationship with humanity, undoubtedly emphasised by the contrast between this sculpture and the surrounding framed works that are, at first glance, based essentially on aesthetics.

Although perhaps not to everyone’s taste, Louise Bourgeois’ fabric works have an inherent beauty and tranquillity that allows even the most critical art lover to appreciate them as aesthetically delightful. It would have been wonderful to have had accompanying background information on the artist’s relationship with the different fabrics she used, and indeed an explanation of the more complex sculptures. Nonetheless, confronting one of the most disturbing sculptures I have seen for some time was indisputably worth it for that moment on the beach.

Posted by Alex Field on 11/14/10
Tags: fabric sculpture mixed-media conceptual abstract figurative
RELATED ARTICLES
COMMENTS (0)
ArtSlant has shutdown. The website is currently running in a view-only mode to allow archiving of the content.