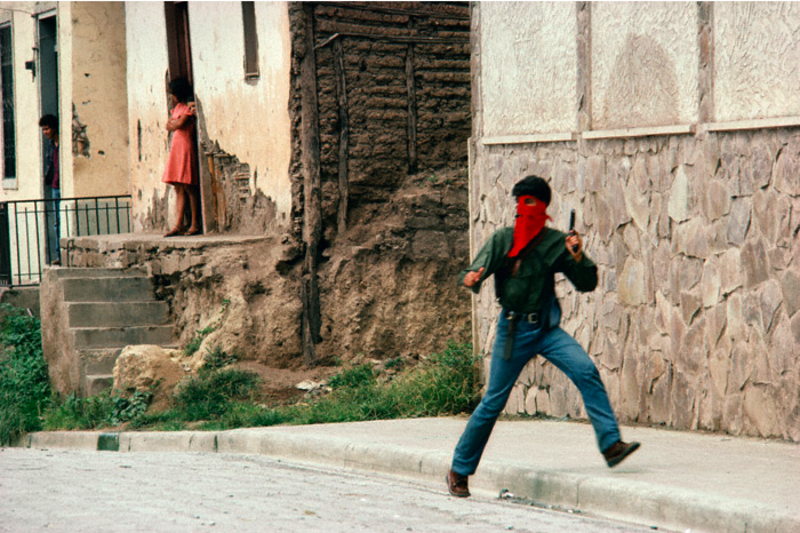 The Photo Essay as Art at the Getty

Ezra Pound once wrote, “poetry is news that stays new.” Art photography was once used as a pejorative for pictures of things that were based on composition rather than content, while real photography was the result of an adventurer and war-chaser setting out to document the truth. Now, after a long century of shifting photographic mores, the question is: when does reporting slip into reportage and once it does, what makes it art?

Currently on view at the Getty, Engaged Observers compiles nine post-war photographers, marked for an extensive body of work on a particular group or topic that goes beyond the normal rigors of photojournalism into the realm of the photo essay. This breadth and freedom is presented largely in part due to the agency Magnum, started by Henri Cartier-Bresson and Robert Capa in 1947, that granted its photographers ownership of their work and encouraged projects of considerable depth and duration. The photographers on view here, while socially conscious documentarians, are portrayed foremost with the slightly more elusive epithet of artists.  This becomes a tricky curatorial construct. What, if anything, separates documentary and art? And furthermore, can “art” actually do a disservice to the importance of hard-fact reporting? Formally considering that in contemporary photography in general, a book length focus on one subject is common enough practice and likely, in a microcosm, to reveal plenty of society and its woes.

With the exclusion of Larry Towell’s quiet ten-year study of a group of Mennonites going back and fourth between the farmlands of Canada and Mexico, the focus here is not on subtle issues—which is not to say many of them aren’t handled with the distinctive style that might help distinguish photojournalism from art. Susan Meiselas’s coverage of the war in Nicaragua in 1978-9, in color, captures the frenzied allure, violence and tragedy of revolution. Alternating between the combustible actions of urban warfare and the serene repose of its fighters, Meisalas captures a blue car engulfed in flames whilst a woman passerby crawls away from the fire and out of the frame while in other photographs, we see surreal portraits of fighters in the repose of the jungle, their traditional Indian dance masks devoiding them of everything but expressions of eerie calm and contentment.

In couple W. Eugene & Aileen Smith’s investigation into the inhabitants of the Japanese fishing village of Minamata, photographers document those who experienced brain damage, paralysis and disfigurement at the hands of Chisso Chemical’s leak of excessive mercury into the water. Aileen Smith’s pictures of one affected young girl, Shinobu, at school and at home with her grief stricken mother, are particularly heartbreaking for their simplicity, their lack of drama or striking visual elements. Emphasis is on a subject instead of a message.

While Sebastiao Salgado’s photographs, selected from his work Migrations, place such weight on aesthetic issues (favoring soft focus and a wide angle that depicts the beautiful, sensual clouds above a refugee camp in a valley in Tanzania as the inhabitants remain almost indistinguishable) that the result seems more patronizing than profound. Perhaps the hardest to look at of all the works selected in Engaged Observers also happens to be the most recent: James Nachtwey’s, The Sacrifice, is a grid of 60 photos taken in the tight confines of a trauma center for victims of the Iraq War. Gory and extremely graphic—soldiers are shown with their faces sizzled off, gaping, bloody holes in their stomach, Iraqi children with their bodies literally separated in two— these pictures don’t have the distance yet, at least for me, to be considered for their artistic value or expression, testimony or historical fact. Unlike many of the other works in the show, Natchwey’s photos are still news.

Posted by Kate Wolf on 10/26/10
RELATED ARTICLES
COMMENTS (0)
ArtSlant has shutdown. The website is currently running in a view-only mode to allow archiving of the content.