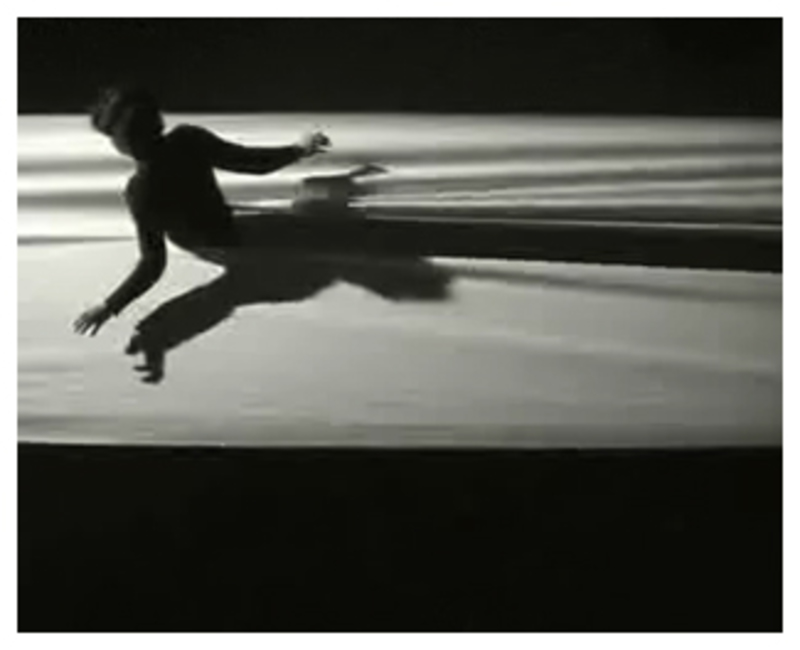 Movement Here and There

The title of Jaye Rhee’s mini-retrospective A time too late, a time to early is, according to the gallery press release, a reference to a quote from Sartre, who did as much as anyone in the twentieth century to establish the individual’s immediate relationship with time.  Of course, there is a lot more to this show of video produced in the past decade, but time is the unifying factor in much of the stronger work here.  Projects such as Seasaw (2002), Tear (2002), Notes (2007) and Mediterranean (2009) all involve movement in time, with the performer being central to the work, almost like a needle playing a record, or an individual trapped in the surface tension between past and future.

All of this work is produced with a master’s touch for the moving image making Rhee a rare commander of the video medium in a way that would have gone over well with the Weimar Bauhaus and perhaps even impressed Sartre himself.  What is fascinating to a casual viewer is the open references to mid-century theory when so much Modernist and Existentialist ideas have been out of fashion for so long, even if the corresponding visual work has maintained its value.

The silent partner in A time too late, a time to early is the curator Sara Reisman, who has long been working behind the scenes in New York City, primary in the much needed area of public art.  In fact, considering Reisman’s involvement in this project, it is difficult not to think of it somewhat in a public context, though it feels equally logical and works quite well here in a commercial gallery setting.  Reisman also produced an essay for the exhibition in which she underlines a connection between Rhee’s work and 20th Century choreographers such as Martha Graham and Alvin Ailey. This connection can clearly be seen in such work as Tear which features a performer slowly tearing through a large sheet of fabric, or Notes (2007) which actually follows performers moving in step, if not actually dancing to the only soundtrack featured in this show of primarily silent videos.  The connection to Modern dance is fascinating because, in the end, though it is considered a medium of movement, in Rhee’s work it is largely delegated to the mechanics of the video itself.  An obvious example of this can be seen in Rhee’s ridiculous video Niagara (2008) where she sped up a scene of a group of people in a Korean Bathhouse wearing blue rain ponchos and pointing to a painting of the Horseshoe Falls as if they where actually standing on the deck of the Maid of the Mist.  Of course Niagara properly falls into another aspect of this show, which could be thought of more in terms of identity politics than Modernism or dance.  What is most interesting about works such as Niagara is how Rhee has set about underlining a public fetish with foreign locales, which to some extent, suggests that identity is often defined by other places.