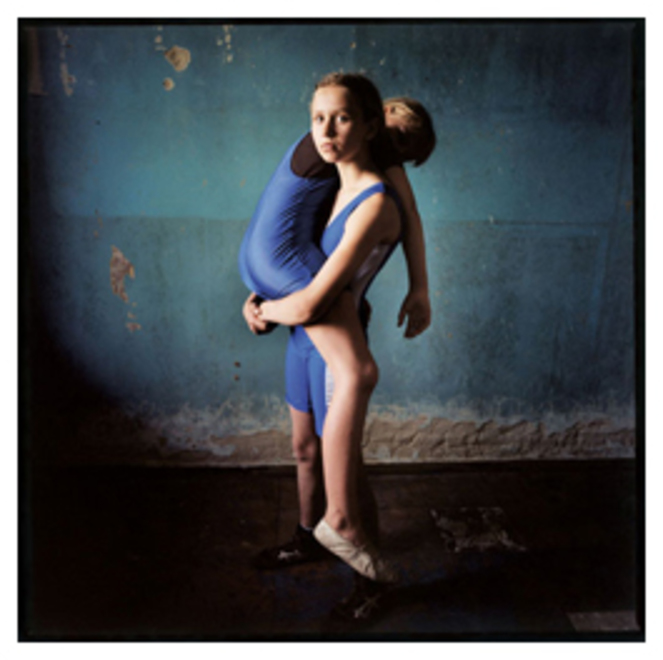 Israeli-born photographer Michal Chelbin tackles youth head on at Andrea Meislin Gallery in Chelsea. Her contemplative medium-format color photographs in the exhibition The Black Eye depict young Ukranian and Russian athletes against a backdrop of peeling painted walls. With the exception of two wrestlers locked in an arm hold and a teenager shouldering an exhausted young girl like a 21st century Madonna, her subjects are isolated within the frame, meeting the viewer’s gaze. Working in the tradition of August Sander and Mike Disfarmer by presenting her subjects in a simple and direct manner, Chelbin presents a pared down view of the awkwardness and grace of adolescence. Accompanied by a monograph of the same title published by Twin Palms, the show captures the hopes and dreams, dedication and exhaustion of youthful athletes in competitive Eastern Europe where rigorous physical training by coaches often replaces traditional parenting for a talented few.

Eschewing digital techniques, the photographer shoots with film and her prints are made using traditional methods. The resulting series of vibrantly hued portraits is not only filled with contrasts but touches upon issues that have troubled the medium since its inception, namely the relationship between photographer and subject. Capturing youthful athletes after an intense workout makes them look both strong and vulnerable, timid and aggressive, torn between conflicting roles as children and young adults. A budding sexuality dominates the frame. Although it’s apparent Chelbin established a bond of trust with her youthful subjects and has tried to render their bodies with  respectful detachment, media-saturated viewers might find it difficult not to subliminally reference Calvin Klein. Although the majority of her subjects are male, gender differences are quite clearly defined, with the lone female athlete cradling a child and the males either wrestling or more directly addressing the camera.

Like her predecessors Rineke Dikstra, Jock Sturges, Wilhelm Von Gloeden and Lewis Carroll, Chelbin’s intensely physical views of adolescents on the eve of sexual awakening are captivatingly beautiful while hovering on the edge of exploitation. By offering up the ripe sensuality of youthful strangers from exotic lands with her confident and unwavering gaze, she cannot help touching upon some critical landmines.

Susan Sontag wrote in her book On Photography, “Like a wood fire in a room, photographs, especially those of people, of distant landscapes and faraway cities, of the vanished past ––are incitements to reverie.” Her controversial view that photographers engage in an endless process of seduction and control with viewers and subjects alike provides an engaging platform from which to view this show. Yet like all good portraitists Chelbin touches a universal chord, reminding us both of the challenges lying ahead for her young athletes and of a painful phase of life we’ve all been through.