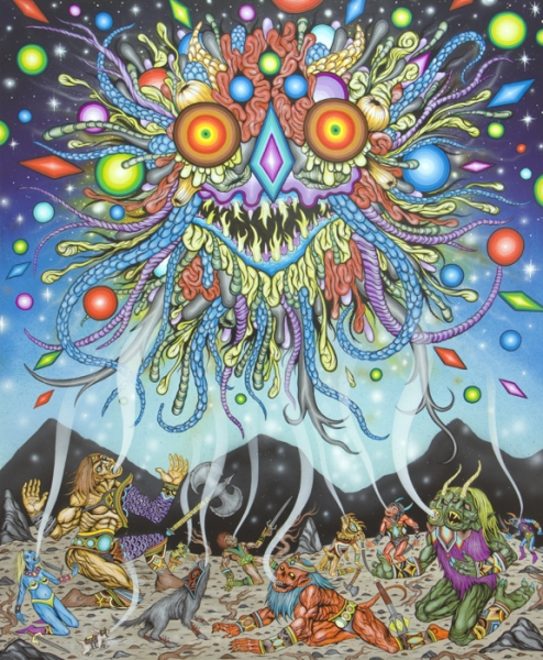 A Slave to Style

I squeezed the rusted accordion gate till it sung, then rapped on the glass door. After an exchange of cartoon gestures with the ladder-perched technician, I was waved inside. White Walls was yet a day from the opening of This Fear You May Know. The “technician” turned out to be Skinner--an apt nickname actually, if you know his work. He descended his triangular mount to generously drop some knowledge on me. Skinner’s last task was to securely mount security cameras to the mezzanine’s elbow to confront visitors upon entry. But the 18 oscillating, blinking red lights are peacocking on gutless camera bodies. (Shelve your fears of TMZ.) “They’re motion-sensing!” Skinner shouted down at one point with ambiguous surprise. The omnidirectional horde of eyes, like a wind-up version of Paprika’s parade scene, unites Skinner’s investigated states of paranoia under a modified United States of America flag.

Of course, it would be misleading to pronounce the show gonzo political art, because it’s mostly fantastical. Think D&D, Heavy Metal, and--I would offer--He-Man and maybe Lord Of The Rings. Even the artist’s name conjures barbaric associations: Skinner...Flayer...Slayer? The mind wanders when paranoia sets in, and here paranoia does pervade. Skinner’s matrix of 30 masks indulges the fear of the faceless person (i.e. Who’s in the burka?) but also laces it with nostalgia. These are old-school, vacuum-formed plastic masks with elastic intact. Remember? You could only trick-or-treat for an hour because of the rash forming on your neck and the spit pooling around your chin? Drill out some eye-holes at your own ($300) risk.

But the eyes have it, that trademark painting style of Skinner. Concentric-circle eyes are as standard here as slime, arrows, runes, pseudo-Islamic/Gothic patterning, and savage gore. You’ll see this and more in the 25 paintings forming the show’s backbone, briefly intermitted by a wall seemingly yanked straight from OMCA...if they had a Twizted Hiztory wing. Skinner’s brushes jut from the wall, panhandling. Laid out anatomically nearby are hand-crafted armor and weapons made over the course of the artist’s (very imaginative or very violent) life--plus his grandma’s old shiv. Insert one Skinner, wrap the whole thing in plastic and bright packaging, and you have a kind of Starting Lineup figure for artist-warriors. This highlights the fact that there are no obvious heroes in his work, only villains. But as I’ve learned from Batman and Scooby-Doo, villains are more fun. [Skinner, check out this guy and don’t hate me cuz I’m right.]

The gallery walls forebode doom as well, sporting painted black silhouettes of billy-goat-steep, craggy mountains. Each painting to the fore is the embodiment of detail, superficially obsessive and ferocious to the point that backgrounds become unnecessary. (They don’t really exist at all in the three largest paintings.) Environment is defined less by depiction than implied by the adornment, armament, and skin, skin, skin of the malignant hellions.

All of this detail slaps me flat; but like a open palm to the cheek (take your pick), it doesn’t penetrate fully. I don’t mean this as a snap though. There’s an astounding amount of information in each painting, and amongst them, but if you’re keen to swim through a painting, you might find yourself in the biggest wading pool you’ve ever seen. See, Skinner’s work doesn’t possess the fractal-like zoom of pictorial interest that leads the eye first from the overall depiction to the brushwork to the chance chemical stirrings of the medium. As the artist intended, I believe, these are depictions only--illustrations more than paintings in the traditional sense. It’s pretty simple to trace the techniques used: It starts with broad background spray, followed by more refined airbrush spray, laying in forms with color. Brushed acrylics form certain details (like concentric eyes) on top of that, and it’s all ultimately lashed together with the fine liquid line of black brushed in by Skinner’s stable hand.

Powered by illustration, not painting? I mean his art doesn’t grasp me as being spontaneously discovered, a diary of the hand and head in process, but rather as an ordained design--and the real rigor seems to lie in that design. His paintings don’t beg to be looked at closely for the beauty of paint. They photograph extremely well, and that might work against them, or for them. (In other words, those atmospheric gases you see here don’t shimmer uncannily in person.)

All of this means Skinner’s work is predictable in a sense...some might prefer to say reliable. Even Skinner uses the word “formula” in defining his painting process. And the art establishment gasps. I recall some undergraduate advice to “never be a slave to your style.” Skinner is a slave to his style, but importantly it’s his style: the action figure-like poses; the striated musculature; the chimerical construction of each villain (straight out of my He-Man childhood playbook: left arm from him, right leg from him...); and always the David(s) versus Goliath scenarios. Is this an observation or a criticism?

Skinner’s painting method is unique among the many painters I know; he executes them one-by-one, start-to-finish, and quickly. For this show, Skinner averaged one painting a week, utilizing the quick-drying nature of his chosen media for easy layering. My concerns for Skinner’s work relate to his development and direction. What are his interests? What curiosity is going to feed his work downward and inward, drawing depth and adding experience (not just muscle memory) to create his future practice? Is there a future for Skinner once his fantasy finds its finite borders?

“And They Battle Under A Hidden Lord”--what a hammy, charming title. It introduces the soul-sucking cloud that seems to pull all my thoughts together. Pustules, ooze, flame-like teeth, looping organs, and concentric-circle eyes form this front-facing thing, pulling the aura of every other trope and trick and trapping that Skinner has worked to own inside its maw. What happens when everything’s consumed? I laugh at how existential that came out. But no, that relates entirely to Skinner’s work. Just as we don’t stress existence because of its presence, I’ll not stress the raw, energetic, joyful (in its own way), and cathartic blast of Skinner’s art. So what is Skinner’s art? What will it be? Does it matter? Is it entertainment? Is it art? Skin ‘em, Skinner. Flay ‘em. Slay ‘em.

Skinner, And They Battle Under A Hidden Lord, Cel Vinyl, Acrylic, Airbrush, and Ink on Wood, 36x30", Courtesy of the artist and White Walls, SF.

Posted by Andy Ritchie on 8/31/10
RELATED ARTICLES
COMMENTS (0)
ArtSlant has shutdown. The website is currently running in a view-only mode to allow archiving of the content.