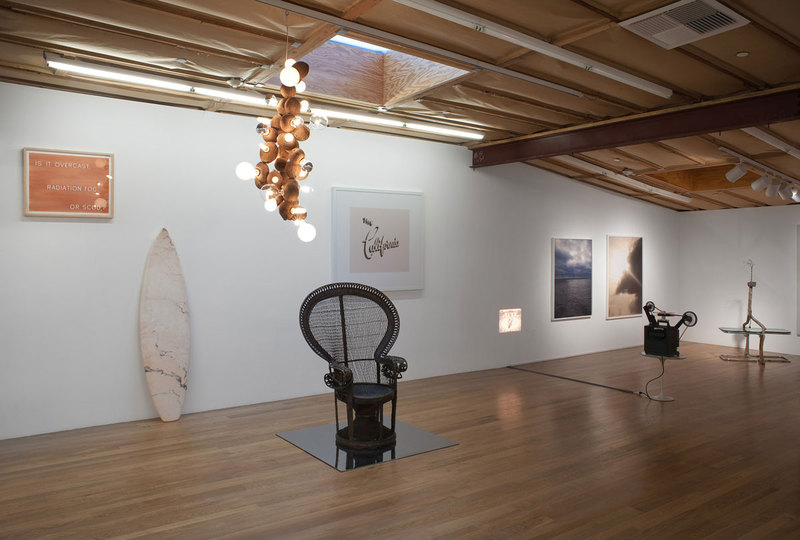 Review also includes “Picture Industry (Goodbye to All That).” Organized by Walead Beshty at Regen Projects.


Both of these artist-curated, large group shows gather an impressive all-my-cool-friends and heavy-hitters list of players and both claim, in their statements, to be in large part organized in response to an ambivalent experience or conflicted impression of Los Angeles as a formative urban, cultural context.

Both shows are full of really good individual works. Couched in terms of Adorno’s notion of decaying “late style,” Walead  Beshty’s Los Angeles is described through familiar dystopic tropes of hollow “semi-disposable” sprawl, isolation, softness, and flimsiness. As a counter to his identification of the city’s notorious Picture Industry with withered ghostliness and the lightweight, unstable status of moving pictures, he finds a need for “pictures to be concrete, to reclaim their moments of heaviness, instead of pretending that they are endlessly able to float listlessly in the breeze.” He resists LA as an atrophying force. Despite that, most of the best moments in “Picture Industry (Goodbye to All That)” are moments of lightness, like Carol Bove’s delicate gold necklace chain netting that lies limp and prone on a plinth or Erlea Maneros Zabala’s marbled Exercises on Abstraction on fugitive, brittle newsprint. The works mostly hew to a black and white palette, orbiting abstraction and passing through representation in choice pop citations of porn, movies, and magazines; dry, aloof, smartly restrained, and stylish to the max (not necessarily a recognizably local look).

Heitzler’s “Endless Bummer / Surf Elsewhere” is far less brooding and ponderous in its motivation, but pretty much just as familiar in its related characterization of the city as dominated by its cinematic narcissism, freeway haze, Santa Ana winds, smoke, surf, sunshine and noir. Pynchon is the hook on which its language hangs. It’s a summer show about Californian summer: there’s a marble surfboard (by Reena Spaulings), movie stars (My Marilyn by Nate Lowman and Tom Cruise by Richard Phillips), hippie canyon furniture (Lucy Dodd), a coconut lamp (Guyton \ Walker), and sunsets. Where Beshty’s core is a bit dour, Heitzler’s radiates something more bouncy, absurd, haptic, and vernacular—something like ‘sunshine’ to the former’s ‘noir’, in other words, another kind of pleasant cliché.

LA often prevaricates about itself, usually in the same ways and habitually through familiar narratives of dispersion, disaster, and emptiness. The past five or ten years have encouraged navel-gazing with a wave of increasing external validation and mounting international recognition. Even W magazine has caught on to LA’s art world. Angeleno artists tend to mythologize their love-hate relationship with the city, probably too much and too often pushed along by a minor draft of self-hatred and an ancient undercurrent of insecurity that is drying up into complacent conformity.

Hopefully, art in LA won’t become homogenized by acceptance. Hopefully, it can retain difference amidst this commercial assimilation.

Posted by Sarah Lehrer-Graiwer on 8/23/10
RELATED ARTICLES
COMMENTS (0)
ArtSlant has shutdown. The website is currently running in a view-only mode to allow archiving of the content.