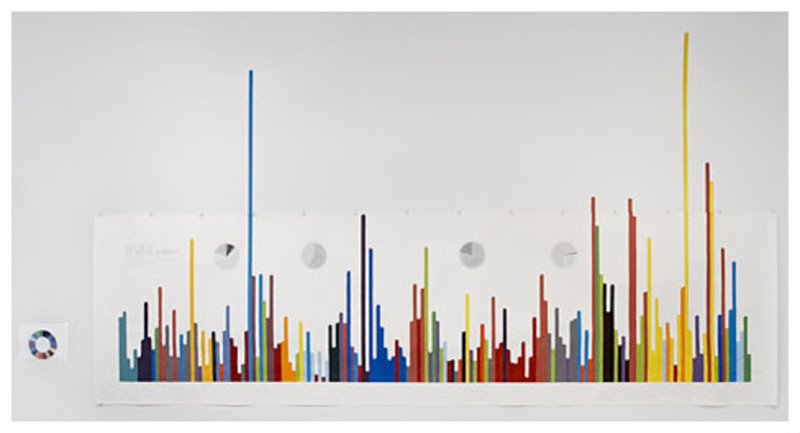 In keeping with an increasingly common art practice of translating scientific and research data into visual forms, Jennifer Dalton’s works communicate with her audience on distinct levels. If you belong to the “inner” art circle—you are likely to relish and indulge in this rigorous display of art world information.  If you are a casual viewer, these works will reveal curious and foreign aspects of the art community.

Dalton analyzes and archives contemporary culture—mining sources like popular magazines, social networking sites, art institutions, and even her own mundane belongings. For the exhibition Making Sense she follows the same pattern with three new works that map the obsessions and intricacies of the current art community.  Perhaps the most visually striking and sensational, the project What Are We Not Shutting Up About? (2010) is a colorful 15.5 ft chart that details every Facebook status update by art critic Jerry Saltz over the course of five months.  Saltz’s statuses have become a discussion forum of various art-related topics, and draw hundreds of comments at a time.  The chart’s x-axis denotes the subject of Saltz’s post, while the y-axis represents the number of comments it generated.  Dalton also color-coded the columns according to general themes, such as ‘Music,’ ‘The Artist’s Life,’ ‘Art in General,’ ‘Old Dead Artists,’ ‘Jerry Saltz,’ and ‘Irony.’  The two most popular discussions were fairly arbitrary: “Whoever bought that $106 million painting is not arts supporter” with 885 comments (referring to the sale of a Picasso painting in the spring auctions) and “Best artists names” with 845 comments.  On the whole, no one theme stands out as dominant or most popular. In addition to this large chart, Dalton broke down the statistics for January 2010 into small pie diagrams, providing us with more detailed information.  Perhaps the most fascinating data to come out of these belongs to the commentators – of 935 participants, five individuals generated 18.5% of all remarks. Although fascinating on even a basic level, this project caters mostly to art world “insiders” who are able to comprehend the necessary references, and are willing to indulge to this degree in a dedicated debate.

There are two other large-scale projects in the exhibition, which offer unnecessary, yet intriguing data regarding our cultural inclinations. In Every Descriptive Word (2008) Dalton lists all the adjectives and phrases used to describe artists in Artforum’s “Best of 2007” issue.  However exasperating, the conclusion of this research could be predicted—ten pages were devoted to male artists, while only 2.5 pages refer to female artists.  What Does an Artist Look Like? (Every Photograph of an Artist to Appear in the New Yorker, 1999 & 2009) (2002/2010) catalogues every artist portrait to appear in The New Yorker in the 1999 and 2009 issues according to their genre (writer, musician, filmmaker, designer, visual artist, dancer, architect, and actor).  Their hanging order is determined by how they were portrayed by the photographer/author, ranging from ‘Genius’ to ‘Pinup.’  Inevitably, this is Dalton’s subjective determination, which relies as much on the portrait photographer’s reading, as it does on her individual perception of the subject. Dalton appears to be aware of this, as she does not at any point presume to expose any cultural revelations in her research and archiving work. Her projects contribute mostly to the domain of pop knowledge—serving as a launching pad for a discussion on the source, type, and frequency of the information we consume.

Under the Radar: Super Pop Boy | Leonard Zinovyev | Taco Eisma
1/10/19
COMMENTS (1)
Across Body Bags
http://www.acrossbodybags.org.uk
Comment by: Anne24 on Thursday 08/26/10 at 5:55 PM
ArtSlant has shutdown. The website is currently running in a view-only mode to allow archiving of the content.